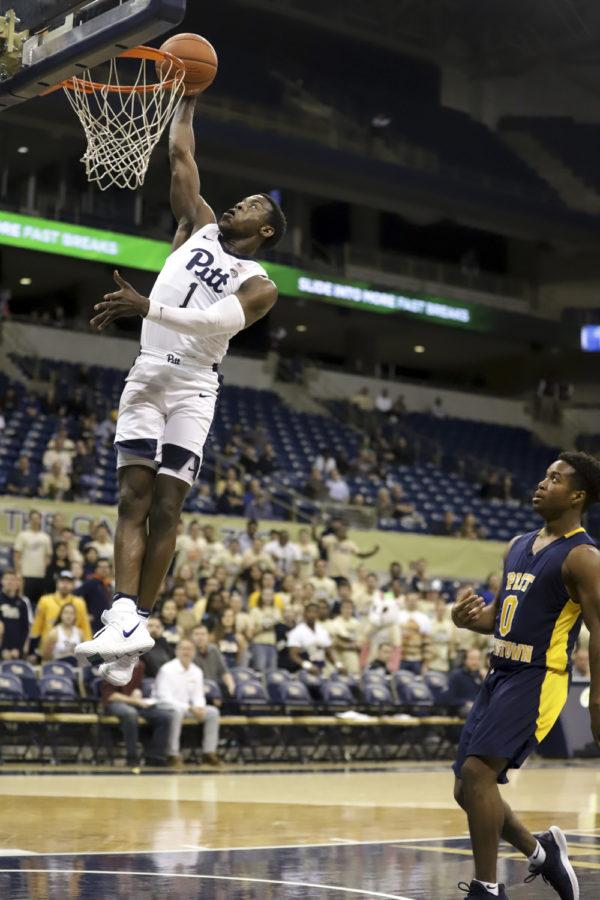 By Trent Leonard and Andrew Kelly

The Pitt men’s basketball team kicked off its season in dominant fashion Thursday night, beating the branch-campus Pitt-Johnstown Mountain Cats 78-59 in an exhibition opener at the Petersen Events Center.

The Panthers kept things fairly close in last season’s exhibition contest, beating Division II Slippery Rock 71-59. But this year’s Pitt team made sure that there would be no such drama, cracking open a 20-point halftime lead on the Division II Mountain Cats that would last throughout the rest of the game.

“It felt good to play against someone under the lights, to be on our home court, to have a real live game situation with people here and to see how guys react to that,” head coach Jeff Capel said. “I think we did some really good things.”

Pitt sophomore guard Khameron Davis — one of the few leftovers from last year’s freshman class — took the Panthers’ first shot of the season, a 3-pointer from the right corner. It clanged up and off the rim for a miss, but first-year guard Xavier Johnson gave Pitt the lead on its next possession when he slashed down the left side of the lane, finishing with a right-handed lay-in to put the Panthers up 2-0.

UPJ tied it up on a deep jumper from junior Josh Wise, and the Mountain Cats took an early lead 50 seconds later when sophomore Marcin Wiszomirski made two free throws.

Pitt’s highly touted first-year guards — Johnson and Trey McGowens — showed off their connection on a play with 17:34 left in the first half. McGowens poked the ball loose from UPJ first-year guard Fred Mulbah, then saved the ball from going out of bounds by tossing it upcourt behind his back. It hit a streaking Johnson perfectly in stride, and he finished with a dunk to give the Panthers a 7-4 advantage.

But the Mountain Cats would not be silenced, hitting threes on consecutive possessions to take the lead right back, 10-7.

That would be UPJ’s last lead of the game.

The Panthers finally kicked into gear and used their superior talent and size to fuel a 12-0 run. Pitt’s upperclassmen were instrumental in the effort, with redshirt junior guard Malik Ellison scoring his first four points and senior forward Jared Wilson-Frame coming off the bench to hit a 3-pointer.

By the time Wiszomirski hit a jumper midway through the half, the Panthers had secured a 19-12 cushion.

Pitt coasted from there, smothering the Mountain Cats’ ball-handlers and playing aggressive half-court defense to force 11 turnovers by halftime. They scored 13 points off those turnovers and 18 more from 3-pointers — good for 31 of their 44 first-half points. At halftime, the Panthers went into the locker room with a comfortable 44-24 lead.

Johnson impressed the most in the first half, making four of his five field goals to lead the Panthers with 10 points. Ellison and Wilson-Frame were next up with nine points each — six of Wilson-Frame’s points came from 3-point range, where he shot an efficient two of five. As a team, Pitt shot over half its 30 field goal attempts from beyond the arc, chucking up 16 threes but making them at a high rate of 38 percent.

McGowens had a quiet first half, playing 14 minutes but scoring no points and missing both of his two field goal attempts.

He scored Pitt’s first points of the second half, ending his scoring drought. Those points must have given him confidence, because a few minutes later, he would provide the Panthers with the highlight of the game.

Sophomore center Peace Ilegomah stole the ball from UPJ’s Wise and delivered an outlet pass to Davis, who in turn passed ahead to a sprinting McGowens. He caught the pass just outside the paint and rose up, cocking the ball back with one hand. UPJ first-year forward John Paul Kromka decided to meet him at the rim — which turned out to be a bad choice. McGowens delivered a poster-worthy dunk right on Kromka, finishing through the contact to earn the and-one.

After the game, McGowens said that the dunk helped him ease his opening-night jitters.

“Yeah, that was right before X [Xavier Johnson] told me just relax, play your game and do you,” McGowens said.

McGowens missed the ensuing free throw, but it didn’t matter — he’d already given his teammates enough energy to last the rest of the game. After the dunk, the Panthers led 50-30 with 16:14 remaining.

McGowens continued to shine in the second half and by the time he delivered another dunk eight minutes later — giving the Panthers a 66-40 lead — he had 10 points, all coming after halftime.

The Panthers didn’t ease up, maintaining a 20-point advantage and only subbing in their deep bench players with a minute and a half left. At the final buzzer, Pitt had won the game 78-59.

Ellison was happy with the team’s performance, but still sees some areas that need improvement.

“I thought we played well as a team,” Ellison said. “But looking at the team rebounds we only led by one, and we have to do a better job taking care of the basketball.”

It’s true that the Panthers only had 35 rebounds to the Mountain Cats’ 34 — a bad sign considering Pitt’s advantage in height differential. Pitt also turned the ball over 17 times, just four less than its opponent.

On a positive note, the Panthers scored 21 fast-break points compared to just six from UPJ, indicating that they plan on pushing the pace this season. In scoring, Johnson, Ellison and Wilson-Frame led the way with 14 points each, while McGowens followed with 10 points.

This exhibition victory was a positive start for a young Pitt team led by a new head coach, but the real season will officially get underway next Tuesday, Nov. 6, with the Panthers hosting Youngstown State at 7 p.m.