Ellison to lead Pitt despite hiatus 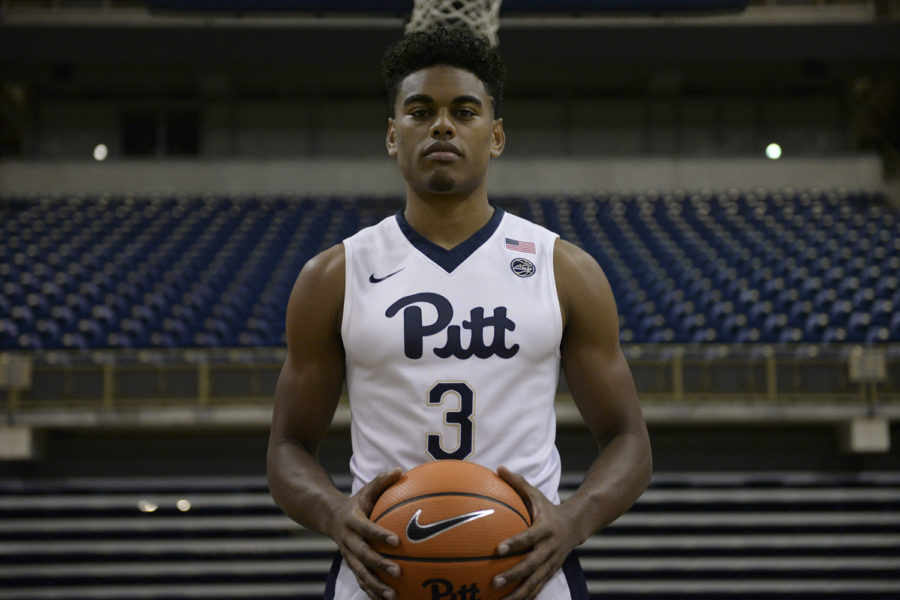 Redshirt junior guard Malik Ellison was named team captain and was said to be “[a] gym rat with a high level of professionalism around his approach to the game” according to Pitt Athletics.

It’s been 606 days since Pitt men’s basketball captain Malik Ellison played in his last official basketball game — a 108-67 loss to Villanova in the 2017 Big East Tournament.

Ellison was 2-6 from the field and 0-3 on 3-point attempts, finishing the day with four points for St. John’s — the university he attended before transferring to Pitt the summer going into his junior year. Due to NCAA rules, Ellison had to sit out last season.

Tuesday will be his first game in more than a year and a half, but he isn’t nervous. In fact, he’s more confident than ever.

“Being able to sit out last year and see the different things … how different teams play and this and that,” Ellison said. “I’ve been able to prepare myself well … my confidence is at an all-time high right now.”

That confidence was visible last Thursday in the Panthers’ exhibition game against Pitt-Johnstown. Ellison tied for the team lead with 14 points, going 6-11 from the field, 1-3 on 3-point attempts and grabbing four rebounds and two steals.

While Thursday was his first time playing a game for Pitt, Ellison doesn’t count the exhibition as his first game back. His focus is on Tuesday, his first regular season game for the Panthers.

Ellison’s redshirt junior season almost didn’t happen at Pitt. He was one of the eight players to request a transfer after previous head coach Kevin Stallings was fired in May. But after meeting with head coach Jeff Capel, Ellison decided to stay on the team. A couple months later, he was named captain.

“He’s a really good athlete,” Capel said. “He’s a guy who competes and he’s a guy who I think for us will be very versatile.”

Ellison is going be thrown into a new role this season. With the Panthers lacking in size, Ellison and teammate Jared Wilson-Frame will both see time at the power forward position.

That is mostly what they have been working on this offseason.

“On offense the way we play, having four guards on the floor is something that is really advantageous,” Wilson-Frame said. “It’s a style of play we want to play with, especially because of our lack of size. Me and Malik will probably be playing a lot at that four-guard spot.”

Wilson-Frame wasn’t surprised when Ellison was named captain. In fact, he credits Ellison with giving him a sense of urgency when it came to his workouts this offseason.

When Wilson-Frame came back to campus in May to start workouts, one of the first things he saw was Ellison in the weight room. He knew at that moment he needed to step up.

“I walked in and saw Malik and Kene in the weight room the first day I came here,” Wilson-Frame said. “It was their first day back, too, and that gave me a little bit of a sense of urgency before I really even took in the fact that I am a senior.”

Even though he didn’t have the title of captain at the time, he always felt like a leader of the team and saw the role as something he aspired to achieve.

“It’s been great,” Ellison said. “I mean I really embraced the role. I’ve always wanted to be a captain, especially at this level.”

Even last year, when Ellison was new to the team and couldn’t play, he always stepped up wherever he could, whether it was by encouraging his teammates in games and practices or by working harder in the weight room. According to Wilson-Frame, Ellison has always been vocal and led by example.

Ellison is a player his teammates never have to question. They count on him to be in the right place and ready to make the right plays.

“That’s just who he is every day,” Wilson-Frame said. “He does the right thing on and off the court, he goes really hard and he’s one of those guys who you never really have to check him. He’s doing a great job.”

Being a captain under Capel isn’t an easy task. Capel demands toughness.

“Coach Capel recruited the guys he did for a reason and even the returners, they’ve learned it,” Ellison said. “But in order to win at this level, you’ve got to be tough. You’ve got to bring it each and every day.”

In addition to helping his teammates embrace the toughness, Ellison is also tasked with helping them learn and transition to a new offense — one that is much more uptempo from what fans would have seen at a men’s basketball game last year.

Last year, under Stallings, the team focused on slowing things down and running sets in the half-court offense. This year, Capel is asking his players to transition and run. While Ellison gives his first-year teammates a lot of credit and is proud of how they’ve handled the change, he’s also prepared to help them through the difficult times.

“I think they’ll handle it well as long as they learn they’re going to hit adversity, but as long as you bounce back and get through it, you’re going to be successful,” Ellison said. “They’re very talented and I’m very excited for them.”

Ellison is also excited for the team as a whole. Out of the 15 players on the team, only a handful of them have played on the court together at once. But even without having that experience, the Panthers have meshed well and competed skillfully not only in the exhibition, but also in a “secret scrimmage” against Dayton University on Oct. 27. As long as the team builds off those successes, Ellison is confident there will be more from where that came from.

This Tuesday will be Ellison’s first regular season game seeing time as a Panther. It will be the first time he gets to lead his team out of the tunnel and into the Zoo era. It may have been 606 days since Ellison played his last regular season basketball game, but he’s ready.

“I’ve been playing basketball for so long and I know all the hard work I’ve put in and I’m an older guy now and I have experience,” Ellison said. “So I just want to get out there and play.”