Danielle Garven, a constant amid change 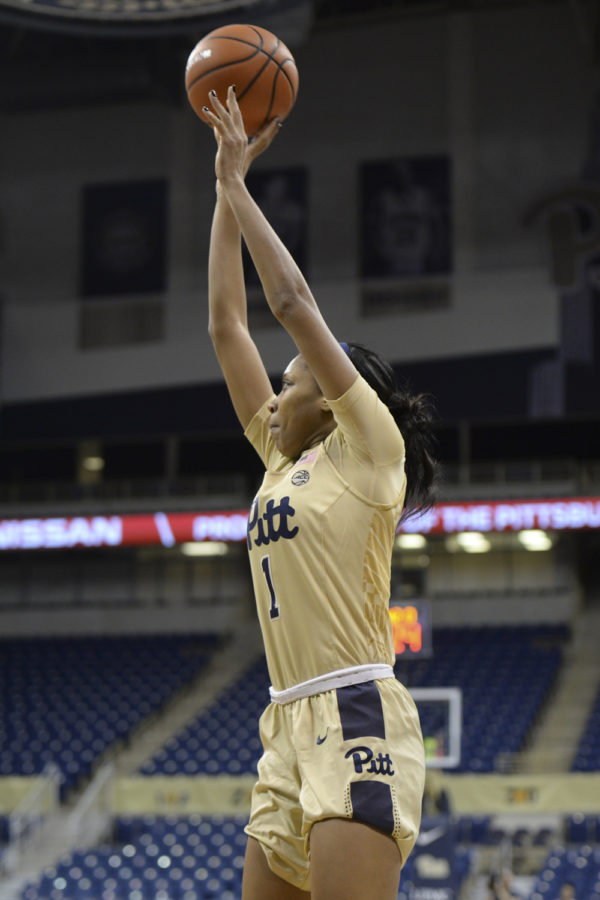 Then-junior Danielle Garven takes a shot during a game against the Syracuse Oranges in February.

It was Danielle Garven’s first practice with Pitt after transferring from Chipola College for her junior year in 2017. Garven was sitting on the sidelines, waiting to hear that her transfer papers had gone through so she could officially start practicing.

By the time former coach Suzie McConnell-Serio walked up to Garven and told her she was officially a Panther, practice had already started, but Garven didn’t care.

Without stretching or warming up, Garven got off the bench, sprinted down the court, joined the team in their drill and started talking — making an immediate impact on her teammates.

“She just kind of jumped right in,” senior guard Cassidy Walsh said. “She had never played with any of us and I think that kind of just woke everybody up like, ‘Wow this girl is ready to go.’ Her energy and talking to everybody was impressive.”

After McConnell-Serio was fired on April 5, Garven wasn’t sure if she would stay or request a transfer. She was leaning toward staying because she had already transferred schools twice before and didn’t really want to again. Plus she liked playing for Pitt and didn’t want to leave her teammates.

“I only had one more year so I didn’t want to transfer again,” Garven said. “So I was like, ‘OK I’m going to stick around and make the best out of this year.’”

Then, she started hearing reports of new head coach Lance White. Everything she heard about him was positive. So it was settled — she would stay.

White felt the same about Garven coming into his new coaching position. Before he was named head coach at Pitt, White had scouted Garven. His first impression of her was that she was a great athlete, did a nice job in the mid-range and was a great defender. But once he got here, he realized Garven was more than just a good player. She was a hard worker.

“Once I got to Pitt I was stunned at just how hard she worked,” White said. “Every day in practice she comes to work. From the moment I got here and got going with them, she was the one who set the pace and tone for how hard you have to work.”

Garven sets the tone and the pace in two ways, White said — with her work ethic and with her voice.

White considers Garven the hardest worker on the team. And when her teammates are around her and see how hard she works, they’re encouraged to bring that same energy and try and work as hard as she does.

Garven also isn’t afraid to speak up. If someone isn’t working as hard as they should be, she lets them know.

“With her voice, she really sets the energy for the team,” White said.

Going into her senior season, Garven told herself she was going to approach each day differently and work harder than ever. She believes if she works hard enough, everything else will fall into place. So far she has been able to follow through with that with some help from her teammates.

“My teammates have definitely assisted me in that,” Garven said. “If they see me slacking they are always on me about doing this and doing that. They are always helping me keep that focus as well.”

Physically, Garven didn’t change much about her game this off season — the only major change was that she started taking more reps. The changes she made this summer were evident at the women’s basketball exhibition game against Gannon University on Tuesday. Garven led both teams with 20 points and had nine of Pitt’s 42 rebounds.

That attitude has not only made Garven a better player, but it has also made her someone her teammates want to play with.

“She has just been able to get me going,” Walsh said. “Her energy and her enthusiasm, especially when she gets a stop on defense or she gets a rebound, she starts clapping really hard, she just gets us going.”

She also brings her energy to practice. Stepping up into a leadership role this year, Garven has made sure every practice is a good one. If things aren’t going well, she is the one who picks her teammates up.

“Whenever we have to get a bucket or we have to get a stop in practice, she is the one who demands it of her teammates,” White said. “Whether it is her going to make the play or her making her team win. That’s the thing that sticks out the most to me is just what a competitor she is.”

Garven isn’t where she thought she would end up her first year year of college. Transferring twice and getting a new head coach the summer before her senior year isn’t quite how she thought her career go. While she is happy with where she ended, she wishes she would have known it would all work out.

“Just knowing that there is a light at the end of the tunnel would have been a motivational piece for me,” Garven said.

Four years later, Garven is happy her path brought her to Pitt, and she is happy she decided to stay. Now she and her teammates are ready to see what this season has to offer.

“She’s playing so free and I don’t think she’s even thinking out there,” Walsh said. “I think she’s just playing a game she loves … I have full confidence in her and I am so excited to be able to play with her for my last year.”