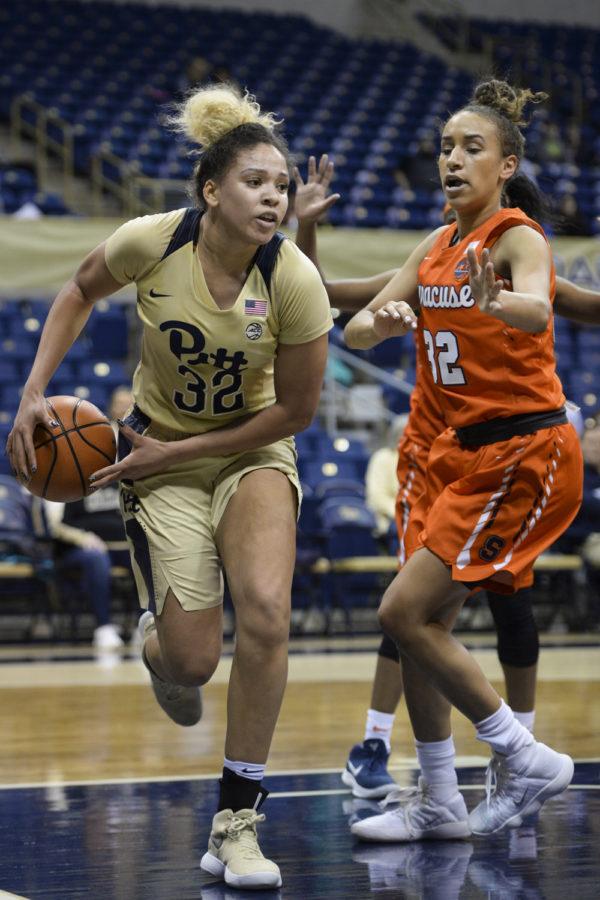 Then-junior Kalista Walters defends against Syracuse in a February game at the Petersen Events Center.

When the final buzzer sounded in the 68-46 exhibition game win over Gannon University, the Pitt women’s basketball team officially began its new season under the direction of a new head coach with a victory.

“I’ve told all the players I want them to prove what they’re capable of doing,” head coach Lance White said. “We started the season with a clean slate … In today’s game I wanted to be able to give them a chance with the lights on to see what they would do.”

White was announced as the new head coach of the Panthers on April 18, replacing former head coach Suzie McConnell-Serio, who was fired after going 67-87 overall and 22-58 in the ACC with only one NCAA tournament appearance in her five years as head coach. White spent the last 15 years in the Florida State women’s basketball program, working his first nine seasons as an assistant coach and the last six as associate head coach.

Pitt is coming off a tough year last season. The Panthers went 10-20 overall and 2-15 in ACC play. Of their 20 loses, four games were by a deficit of more than 20 points and three by more than 30.

The Panthers are also going to be missing an integral part of their team this season — Yacine Diop, the most important offensive player for Pitt last season. She led the team in points and shots taken, averaging 15.7 points per game and taking 200 more shots than the next player. To top it all off, Diop transferred to play her final season at Louisville — Pitt’s conference rival.

But the outlook for Pitt isn’t all that bleak. There are some positives coming into this season — excluding Diop and Maguette Sol, every player from last year is returning, including five seniors.

“I think [the seniors] are a group that has been through the wars and understands how hard you have to play at this level,” White said. “Now as someone new comes in, they are the ones who have to set the tone for practice and now as we go into games they have to be the leadership that changes who we are.”

Those five seniors are forwards Danielle Garven and Kauai Bradley, guards Cassidy Walsh and redshirt senior Aysia Bugg, as well as center Kalista Walters. Bradley appeared in all 30 games last year and is a good defensive player, while Garven will be looking to make her impact offensively with her good mid-range game. Walsh will serve as a leader off the bench and can make the occasional 3-pointer every now and then as 15 of her 23 shots made last year were from the 3-point line.

Bugg and Walters will both likely have the biggest impact going into this season. Bugg missed all of her senior season last year due to injury, but was given a medical redshirt, allowing her to play this season. Over her collegiate career, Bugg has started almost every game for the Panthers since her first season. Her junior year, Bugg led the team in assists averaging 3.4 per game.

Walters started all 30 games last season, averaging one block and 0.9 steals per game. She proved to be the option down low for the Panthers, averaging 9.8 points per game and shooting 51 percent from the field.

Other non-senior players who will likely make an impact are junior guards Jasmine Whitney and Alayna Gribble.

Whitney was thrust into the starting point guard position when Bugg was injured, and she ended up starting all 30 games last year. She led the team in assists with 4.6 per game and was third in scoring behind Diop and Walters, averaging 7.4 points per game. Whitney proved herself down the stretch, scoring more than 10 points in seven out of her last nine games and was named captain by McConnell-Serio.

Gribble was the best 3-point shooter on the team last season. While an injury caused her to miss about seven games, she was still able to make into Pitt’s top 10 3-point shooters, sitting at 88 career 3-pointers made. In a game against Georgia Tech last season, she tied the most 3-pointers in a game in program history with seven, which she had also done the season before at Syracuse. In that game against the Yellow Jackets, she also scored 29 points, which was the most for a Panther last season. Last season she also shot 37 percent from the 3-point line.

While Pitt has a solid group of returners to count on, it is going to want to see improvement and growth from sophomore guards Pika Rodriguez and Kyla Nelson as well as sophomore centers Jaala Henry and Cara Judkins.

Both Rodriguez and Nelson have played at the international level, Rodriguez with Puerto Rico and Nelson with England. Rodriguez is a fantastic 3-point shooter and will be able to showcase that ability if she is given the opportunity this season. Nelson played in all 30 games last year, averaging 4.9 points per game and was tied for second for 3-pointers with 30.

Henry came into the program ranked the 16th best center in her class by ESPN.com and was ranked the 39th prospect in the country by All Star Girls report. Judkins was a two time Adidas All-American in 2015 and 2016 and was ranked 20th at her position by ESPN Hoopgurlz. Neither saw much playing time as first-years, but with a new head coach that could change.

Despite its lack of size, the 2018-19 recruiting class looks to be a good one. The three recruits, all listed as point guards, are Ismini Prapa, Tehya Lyons and Jahsyni Knight. Prapa and Lyons both have 90 ratings and are jointly ranked as the No. 27 point guard in the 2018 class. Knight has a 92 rating, was the no. 24 point guard in the class and was in the ESPN Top 100 as well. We will have to wait and see if any of these players get any meaningful playing time this season, but Prapa did see time in the exhibition game against Gannon, scoring four points in six minutes of action.

The schedule for the Panthers looks to be a difficult one. The non-conference schedule will clearly be the easier part of the schedule with only one team, UCF, finishing in the RPI top 50 last year. Some difficult teams include West Virginia, which made the WNIT and lost in the final, as well as mid-major teams like St. Francis (Pennsylvania),  Duquesne and Fordham, who all won more than 20 games last season.

The real test for Pitt will be in its ACC conference schedule. The ACC is one of, if not the best conferences for women’s college basketball. In the AP top 25 preseason rankings, six teams are from the ACC, which include No. 1 Notre Dame, No. 5 Louisville. No. 17 NC State, No. 18 Syracuse, No. 21 Duke and No. 25 Miami. Other ACC teams that received votes were Florida State, Virginia and Virginia Tech.

The Panthers are predicted to finish 13th in the conference, which seems like a good prediction considering their record from last season and the loss of their best offensive player in Diop. While this looks like a year of transition for White and the program, under a new coach and with a solid group of returners, this group could surprise quite a few opponents.

Pitt starts their season against UCF at the Petersen Events Center this Wednesday at 11 a.m. The first game of the season is also the annual School Day game, when thousands of kids from across the region come to watch the game.

“Our expectation for the team this year is definitely to have a better record than we did last year,” Garven said. “And to make it to postseason, that’s basically our goal as a team.”