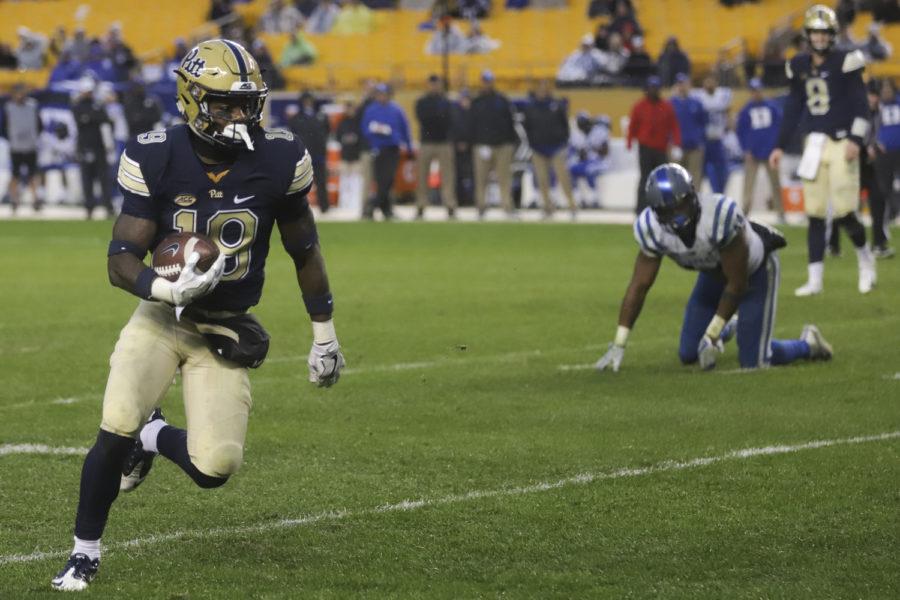 First-year defensive back and wide receiver V’Lique Carter rushes the ball during the Panthers’ 54-45 victory over Duke Oct. 27.

In what were some of the worst field conditions this year, the Panthers took care of business down in Charlottesville with a convincing win over Virginia, giving themselves sole possession of first place in the ACC Coastal division.

Once again, the Panthers kept the ball on the ground against a stout Cavalier defense, accumulating 42 carries for 254 yards. On the flip side, the Panthers’ defense had one of its best games of the year, allowing only 13 points while limiting UVA’s offense to just 249 total yards.

Here are three takeaways from the Panthers’ astronomical win against Virginia.

After senior RB Qadree Ollison started limping with what appeared to be a hamstring injury toward the end of last week’s win against Duke, fans questioned how effective he would be against Virginia. Although Ollison carried the ball just seven times for 24 yards, fellow senior RB Darrin Hall stepped up, totaling 229 yards for 19 carries and three touchdowns. Hall’s performance earned him National Offensive Player of the Week honors.

Over the last few seasons, head coach Pat Narduzzi’s offenses have favored the run, regardless of who the offensive coordinator is. In the Panthers’ last three ACC games, they’ve run the ball an astounding 141 times to amass 1,003 yards. In those games, Pitt went 3-0 and outscored its opponents 121-95. By comparison, in the Panthers’ first two ACC games — in which they went 1-1 — they ran the ball 67 times for 366 yards, narrowly outscoring the competition 59-57.

With Ollison ranked third in the ACC in rushing yards and Hall ranked ninth, the Panthers have one of the best RB tandems in the conference. If the Panthers want to punch their ticket to the ACC Championship in Charlotte, North Carolina, they’ll have to continue their attack on the ground.

Although Virginia does not possess a stellar offense, the Panther defense still had an impressive showing, holding the Cavaliers to just 13 points — their lowest output all season. This was also the least number of points Pitt has allowed since the opening game against Albany, when they held the Great Danes to seven points.

The Panthers racked up five sacks on Friday, led by senior DL Dewayne Hendrix who had 2.5 of his own. Senior LB Seun Idowu and junior DB Damar Hamlin led Pitt with nine tackles each. Hamlin also got credit for a pass defended.

Virginia QB Bryce Perkins has been considered one of the best running QBs in the country this year, rushing for 575 yards entering last Friday. Having rushed more than 100 yards in three seperate games this season, Narduzzi has called him “the fastest quarterback we’ve faced this year.” Despite that, Perkins lost a total of seven yards on 15 carries, his lowest rushing output of the season.

After allowing 619 yards against Duke last week, the Panthers cut that number down to just 249 against UVA. Of those 249 yards, only 44 were on the ground, an encouraging sign as the Cavaliers’ rushing attack has averaged an impressive 170 rush yards per game. With an upcoming matchup against a strong Virginia Tech offense, it’ll be crucial for the Panthers to shut down the run game and control time of possession.

Hailing away from Heinz

Entering Friday’s game, Pitt was winless on the road, dropping games to UNC, Notre Dame and UCF. In those three games, the Panthers averaged just 21 points on offense while averaging 32.4 points in five games at home. On the defensive end, Pitt had allowed 34 points per game away from Heinz Field and 31.8 points per game at home.

Although the offensive mustered just 23 points in awful weather conditions, the defense kept its footing. In their past two road games, both against nationally ranked opponents, the Panthers have allowed just 32 points.

After a trip back to Heinz to play Virginia Tech, Pitt will hit the road for the final two games of the regular season against Wake Forest and Miami. If the Panthers want to solidify themselves as not only the number-one team in the Coastal Division, but as serious contenders for a high-level bowl game, they’ll have to do it on the road to close out the season.