A day in the life of student canvassing 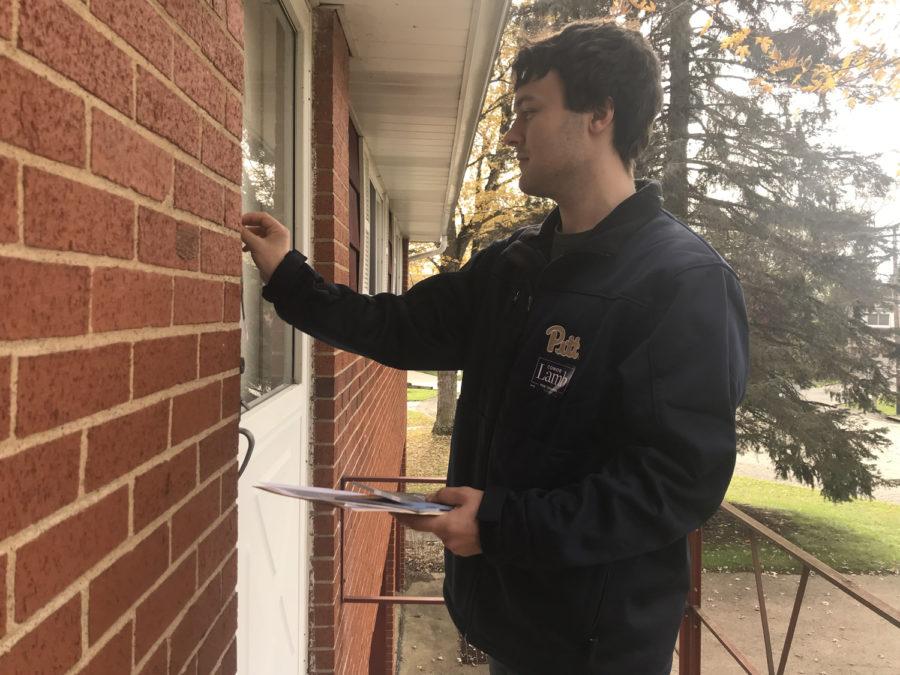 Forty-eight hours before election day, Alex Rose rapped on the front door of a house in Penn Hills. Not many people on his list had answered his knocks — Sunday afternoon is time for church and brunch for most people, he joked — but this house seemed promising. The inner door was propped open, and the sounds of conversation and television floated from inside.

Sure enough, a few seconds later he heard a yell — “Is that the Latter Day Saints?” — and a man appeared at the door.

Rose gave a short, practiced, friendly spiel. He was with the campaign to elect Democrat Conor Lamb to the U.S. House of Representatives, he told the man. The election was this coming Tuesday and Alex and his fellow volunteers were walking around the neighborhood to make sure people knew where and how to vote.

“The Steelers game’s on, man!”

“But can we count on your vote?” he asked.

“Yes, you can,” the man said, and closed the door.

Back on the street, Rose tapped at the screen of his phone, marking the man as a Lamb voter in the canvassing app MiniVAN. Lamb and his Republican opponent, Keith Rothfus, both sitting congressmen from Pennsylvania who were redistricted into the 17th District earlier this year, were nearing the end of the fight — and volunteers for both campaigns were out in droves.

“A lot of people just ignore us,” Conor Guiser, public relations director for the Pitt College Republicans, said. “If they’re home, they just suddenly go quiet and wait until we walk away. The people who do answer are generally very nice. Usually they just answer our questions with a smile, but some people really want to talk to us about politics.”

PCR has sent groups of 10 or so people out to knock on doors almost every Saturday for the last few months, Guiser said. They’ve campaigned for various Republican candidates in the area, but like the Pitt Democrats, they’ve focused on the race between Lamb and Rothfus, the most competitive congressional race in the Pittsburgh area.

The formula doesn’t vary much from party to party. The volunteer, whether a Lamb or a Rothfus supporter, is given a list of doors to knock on, told to be friendly and polite and sent out across the City to convince voters to go to the polls on Tuesday.

By the Sunday before the election, Rose explained, the goal of knocking on doors wasn’t to try and convert Rothfus supporters or undecided voters that they should vote for Lamb. Instead, the Lamb campaign had identified, through various means, a list of voters who were likely to be Lamb supporters and they sent canvassers out to try and ensure they would actually vote.

And most of the Penn Hills residents who answered Rose’s knocks Sunday — about three or four out of 10 — assured him that they had already planned on voting for his candidate. One voter, whose yard featured signs for U.S. Sen. Bob Casey and Gov. Tom Wolf as well as Rep. Lamb, waved Rose away as soon as he opened the door and saw the Lamb sticker on his jacket.

As president of the Pitt Dems, Rose has plenty of experience as a canvasser. He’s been involved with politics since working with Hillary Clinton’s campaign as a first-year, and he spent last summer working full-time for an education super PAC, canvassing “eight hours a day.”

But for others, the experience was newer. Dr. Eric Nolley, a pulmonary care physician who lives in Squirrel Hill, said he enjoyed knocking on doors for Lamb Sunday, his first time canvassing — although one family’s German shepherd nearly bit him.

“But they’re voting for Conor, so that’s what matters,” he said with a laugh.

Jared Landis, a junior media and communication major, said he had canvassed three times since transferring to Pitt from Penn State University.

“At Penn State, I didn’t feel like there were a lot of opportunities,” Landis said. “As soon as I got to Pitt, the doors were open. I feel more like I’m doing something. As a hardcore Dem, it’s great to have an impact on my community.”

Landis, Nolley and Rose were part of a group of 15 or so volunteers that gathered in a small room in the Panera on Forbes before scattering around Penn Hills to knock on doors. After hearing from a special visitor — Allegheny County Executive Rich Fitzgerald, who stopped by to give them a quick motivational speech — each volunteer received a packet from Adrienne Godish, the Pitt sophomore leading the canvassing event. The packets contained a map, a list of addresses and a short script for talking to voters who answered the door.

“Field work like this is how you actually get people elected,” Godish said. “It’s really imperative.”

Lydia Green, a “canvass captain” with the Lamb campaign, agreed. Green started working with the Lamb campaign at the beginning of this year, during the special election Lamb won by a few hundred votes in a Republican district. She stayed on after her graduation from Carnegie Mellon University last spring. Now she recruits and trains volunteers, helps Godish organize canvassing events and occasionally — when she’s not needed elsewhere — knocks on doors herself.

“Knocking on doors is even more important than voting, because you’re convincing other people to vote,” Green said. “When I first started, I was really anxious about talking to strangers, but it feels like something where you really make a difference.”