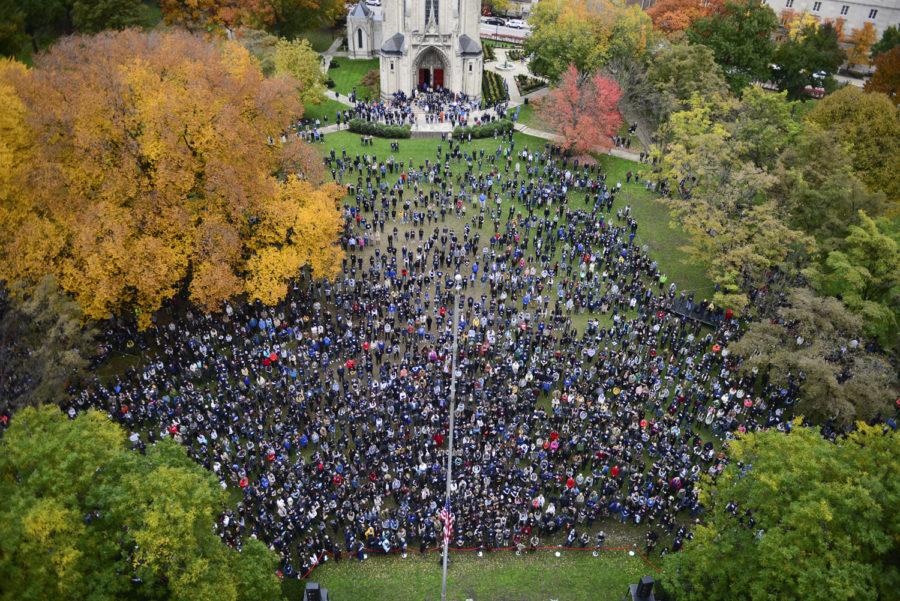 Close to 3,000 people attended the Stronger than Hate vigil on the Cathedral of Learning Lawn Monday afternoon.

On the grass between the Cathedral of Learning and Heinz Chapel Monday, nearly 3,000 people gathered to mourn the 11 victims of the Oct. 27 Tree of Life Synagogue massacre. Students and elected officials wearing T-shirts with “Stronger Than Hate” printed on the front spoke to the crowd about their feelings surrounding the past week in Pittsburgh.

In the week following the shooting there were several vigils which, like Pitt’s, honored the victims. At the funerals for the deceased last week, thousands from the Pittsburgh community gathered to mourn. A demonstration Tuesday also protested President Donald Trump’s visit to Pittsburgh, which many Pittsburghers thought he should have postponed until after the funerals.

“I wish he would’ve let Pittsburgh mourn before he came,” senior biology major Josie Baker said, “because it’s hitting so close to home.”

Baker grew up in Greenfield, a suburb about 30 minutes away from Pittsburgh. She and her friend Parker Denz, a senior microbiology major, attended the vigil to show support — but the issue was closer to home for Denz, who has Jewish family members in his hometown of Buffalo, New York.

“My grandmother … lived around the time of the Holocaust, so it definitely hits very hard,” he said.

The event, which ran from noon to 1 p.m., also hosted student a cappella groups The Songburghs and C Flat Run, which performed Beyonce’s “I Was There” and Frances’ “Grow,” respectively.

Before The Songburghs took the stage, Chancellor Patrick Gallagher shared a few words about what the Pitt community means to him.

“Today, right now, let us all resolve that our commitment to stand together will endure,” he said. “Let us show the world that is what we mean when we say ‘Pittsburgh strong.’”

Before the event, SGB President Maggie Kennedy said her organization had distributed more than 10,000 “Stronger Than Hate” shirts. Each had a familiar Jewish symbol printed on the chest, which many mistakenly refer to as the Star of David, according to Rabbi Daniel Schiff of the Jewish Federation of Greater Pittsburgh.

“It’s not a star. In Hebrew it’s called the Magen David. What’s a magen? A magen is a shield. It’s the Shield of David,” he said. “Look at that shield and resolve that in the weeks and months and years ahead, you will respond to this evil by being a shield … a shield for those who need you.”

Before the a cappella groups joined forces to sing an original song called “Stronger Than Hate” — co-written by student Harry Lebovitz and alumnus Konstantine Deyev — Wasiullah Mohamed, the executive director of the Islamic Center of Pittsburgh, spoke.

“A couple days ago … there was an interfaith vigil [at Soldiers and Sailors] and they asked me to speak and what I chose to share was a verse from the Quran that kind of called us, the 41st chapter, the 34th verse. What it said was, ‘When you see evil, when you are faced with evil, you must respond with goodness,’” he said.

Mohamed, a 2016 Pitt alum, pleaded with the audience to keep their energy up and keep the words of all the speakers in mind moving forward.

“If before the last tear drops … you have not changed one thing in your life, then you have failed [the victims],” he said. “The question is, are you gonna show up tomorrow? Or the next day? Or the next week or the next year? Because [anti-Semitism] will not go away shortly … you must commit yourself personally to fighting this.”