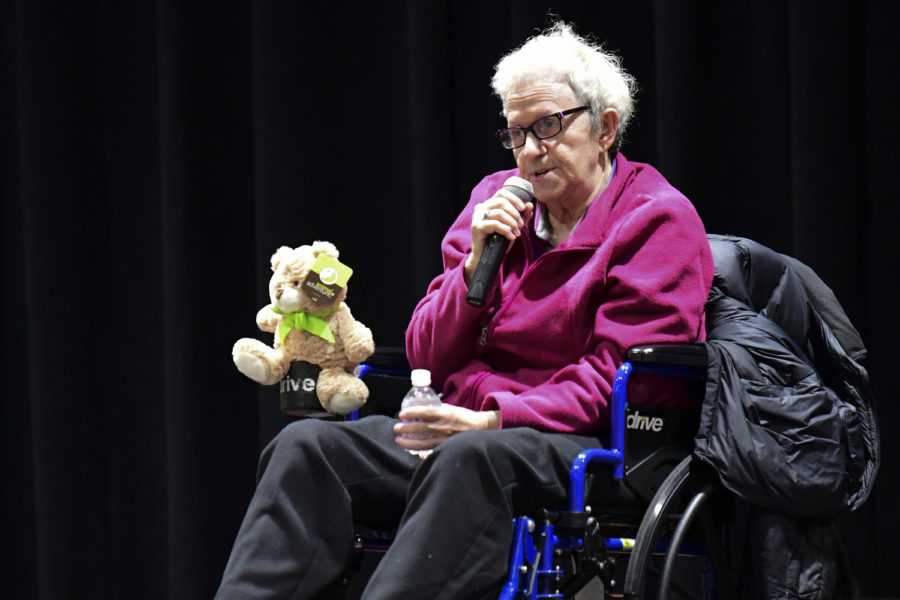 For Shulamit Bastacky, coming to Pittsburgh was a life-changing event. The Lithuanian Holocaust survivor spent time in Poland and Israel before settling in the United States — precisely 55 years ago.

“Today is an interesting day for me, because exactly on this day in 1963, I discovered America,” Bastacky said on Sunday.

Bastacky, 77, immigrated to the United States in her early 20s. She returned to Pitt — where she earned a degree in social work — Sunday evening to share her story at the William Pitt Union for an event hosted by Alpha Epsilon Pi, one of Pitt’s Jewish fraternities.

This is the third year this fraternity has brought Holocaust speakers to Pitt to share their stories, but this year was the biggest event they have hosted. Bastacky, now a retired social worker, began by discussing the recent tragedy in Pittsburgh.

Bastacky currently lives in an apartment complex in Squirrel Hill for senior citizens. When she heard the sirens on the Saturday morning of the Tree of Life shooting, she assumed that one of her neighbors was being taken to the hospital.

“I never expected it to occur in Pittsburgh, or even the U.S.,” she said. “I was literally in a state of shock. I couldn’t eat all day, not until [the] next day.”

Bastacky said she immediately thought of her relatives she lost during the Holocaust — many in horrific, unspeakable ways. Other relatives were lost in ways she is not aware of to this day. She said her family chose not to tell her some details of what truly happened during that time.

Bastacky was born on Aug. 25, 1941, in Vilnius, the capital of Lithuania — home to a sizeable Jewish community, with an estimated 100,000 Jews in the city. She was one of the “Hidden Children” of the Holocaust, hidden and saved by non-Jews. She was taken in by a Polish Roman Catholic nun just a few weeks after she was born and spent the first years of her life isolated, provided no more than the very basic, necessary human touch.

Her parents worked in the local labor camps and miraculously survived. She was reunited with them in 1945 when the war ended. Her father found her in the orphanage and recognized her when he saw her birthmark. She was taken to a rehabilitation facility for Holocaust survivors to be exposed to sunlight and fresh air. As a child, she was easily scared by unexpected loud noises like phones ringing and she admits that this affects her even to this day.

At 17, Bastacky moved to Israel to escape the anti-Semitism in Europe. While in Israel, she served in the army there. Four years later, in 1963, she and her family moved to America. She made her way into Pittsburgh via New York City and settled in Squirrel Hill. Bastacky has been a proud member of the Squirrel Hill Jewish community ever since.

The brothers of Alpha Epsilon Pi shared that planning for Bastacky’s visit to campus began over the summer — making the timing of the event unfortunately and eerily fitting. Dan Ward, a sophomore accounting major, is the Jewish identity chair of the fraternity, and most of the event-planning fell on his shoulders.

“Obviously, it’s a terrible situation that happened [at Tree of Life],” Ward said. “Although it was a negative thing, we need to turn it into something positive. Luckily, a lot of people decided to come out to this, because it’s an important thing. It’s a really important thing for all of us right now.”

One student who came to experience Bastacky’s story was senior computer science major Carly Hoffman, who is also involved in Pitt’s Jewish community. She felt the stories Bastacky had to tell were important, even though they were heartbreaking, especially with the horrors that took place less than two weeks ago.

Bastacky emphasized the topic of the future in her time on stage. She shared her experiences of hope, love and friendship that have helped her get through the recent hard times. When one student asked Bastacky during a Q&A session how non-Jewish people can be good allies with their Jewish neighbors, she had a simple, but effective answer.

“Simply showing love and care, because this is what happened to me,” Bastacky said. “Simple gestures of kindness, even by phone.”

She spoke very fondly of her international friends who all showed love and support after the shooting — many called her from places like Germany, Italy, Egypt, Israel and Japan after hearing the news of last Saturday’s tragedy.

She was amazed by the acts of kindness, receiving food from neighbors and phone calls from friends across the globe. She even said that someone left a teddy bear in front of her door. All of these small acts showed her an “example of what is the very best in human beings.”

Aaron Black, a senior biology major and the recruitment chair for the Alpha Epsilon Pi fraternity, was pleased by the turnout for this year’s event and all of the students who were eager to show their love and care for the Jewish community.

“It’s our favorite event to hold because a lot of people don’t get to experience a lot of things we had growing up,” Black said. “At the age of 5, I was being taught things like this that most other people in this room might not have heard. So just having people who are not Jewish come here is really meaningful not only to the chapter, but to me specifically.”

Bastacky was also thrilled with the turnout, stating that she was proud of the way the many young people were determined to make a difference and bring light to important situations like this.

“It’s nice to see young people here taking the lead,” she said. “You are the future of the world. The future is up to all of us who are sitting here.”

Bastacky now regularly visits schools to speak about her experiences. Because she never had a favorite toy to hug and hold for comfort as a child, she is making up for this by collecting teddy bears for children with troubled childhoods and residents of local women’s shelters. She is currently collecting teddy bears at her senior citizen apartment complex for refugee children.

“Reach the people who came from another background,” Bastacky said. “It’s wonderful to be different. It would be rather boring if we were all alike, don’t you think?”