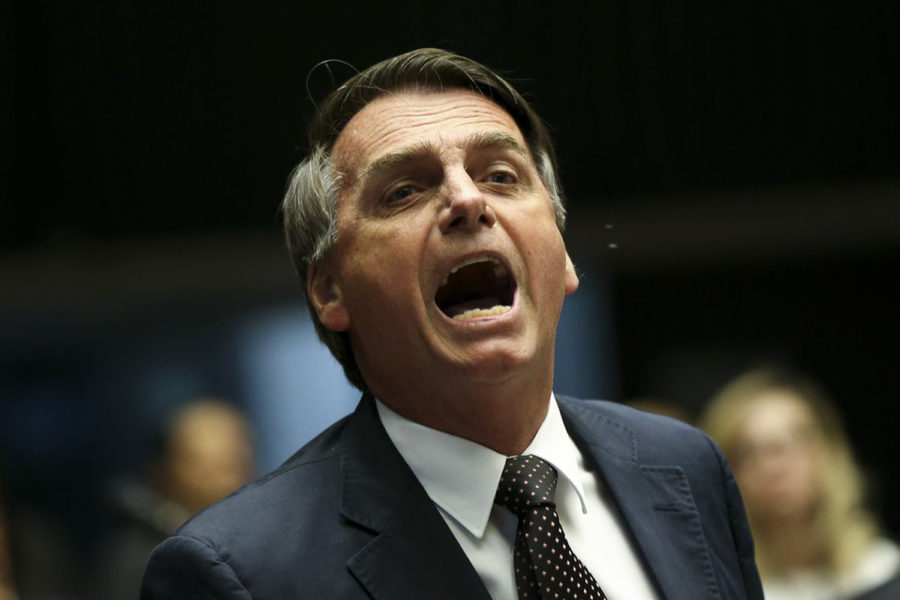 Then-deputy Jair Bolsonaro argued with Maria do Rosario during a general commission in the Chamber of Deputies while discussing violence against women.

Jair Bolsonaro called a congresswoman too ugly to rape. He considered Afro-Brazilians unfit to procreate. He referred to migrants as “scum.” He claimed to be “in favor of a dictatorship.” He called for the murder of 30,000 political opponents in 1999, and last year he suggested that his supporters should shoot members of the opposition party.

No, this isn’t the leader of a fascist dictatorship — this is Brazil’s new president.

Even though Bolsonaro’s views are absolutely appalling, his victory should not surprise avid observers familiar with the intimidation preceding the election.

His supporters openly harassed, threatened and attacked journalists. Bolsonaro-backing military police invaded more than 20 Brazilian universities. They confiscated material relating to the history of fascism, interrupted classes because of their “ideological content” and removed anti-fascist banners and posters.

Bolsonaro’s win coincides with the success of far-right nationalists across the globe in recent years, and unsurprisingly, the media gave him a platform multiple times to enable his victory. But tolerating his views isn’t just a somewhat controversial political stance — it actually enables atrocities.

Bolsonaro’s treatment of marginalized groups should frighten anyone with a conscience. He believes women should not receive the same salary as men, and he considered having a female child “a moment of weakness.” Millions of women organized against him, but it wasn’t enough.

And as if Bolsonaro’s anti-women views weren’t disgusting enough, he wants gay people to die as well.

“I wouldn’t be able to love a gay son,” Bolsonaro said in 2011. “I wouldn’t be a hypocrite, I’d prefer a son to die in an accident than appear with [another man].”

And Bolsonaro has made no attempt to hide his violent inclinations — in fact, he campaigned on them.

Brazil has the most murderous police force in the world. It kills thousands of civilians every year. But Bolsonaro does not advocate for policies to lessen the violence. Instead, he wants to give the police “carte blanche” to murder suspected criminals.

Bolsonaro wants to purge his country of “left-wing criminals” in “a cleansing never seen in the history of Brazil.” He wants his presidential opponent to “rot in jail” along with popular former President Lula da Silva. This rhetoric, under no uncertain terms, mirrors the spirit of fascist leaders’ words throughout history. Threatening your opponents with, at best, incarceration — or, at worst, genocide — endangers the safety of millions and threatens to destroy the very fabric of democracy.

His election may seem to only present a danger to Brazilians, but his harm will extend beyond the country’s borders. As the fourth-largest democracy in the world and the biggest in the region, Bolsonaro’s regime looms like a dark cloud over Latin America. If Steve King’s impact is any indication, he will likely bolster other fascist candidates who rely on private business interests and wealthy supporters to devastate vulnerable left-wing governments.

Certainly, the biggest supporters of fascism aren’t the working class. Although numerous outlets including Time, The Guardian and Los Angeles Times purport that his victory resulted from populist appeals, voting data shows otherwise. Bolsonaro won in 97 percent of the richest cities, and his opponent won in 98 percent of the poorest cities.

Private and wealthy interests support him because of his supposedly pro-business stance. He wants to privatize state-owned companies and advocate for free-market policies. However, his support from mining and agriculture interests originates elsewhere.

Bolsonaro has promised to eliminate the ministry of environment and seize protected indigenous and Afro-Brazilian lands for private use. This promise bears harmful consequences not only for the people living there but also for the environment. His policies will increase deforestation of the Amazon rainforest, removing vital carbon sinks that protect against the worsening of climate change.

Bolsonaro cleansing his opponents and destroying the planet threatens the safety of everything we hold dear. Tolerating legitimate fascism could destroy democracy. The right to openly call for genocide upon your enemies lies in no real constitution. By permitting anyone — leaders especially — to have platforms for their dangerous beliefs, lives will inevitably be lost.
Portraying hate in any manner — including comedically — presents a threat to marginalized people. Former presenter Monica Iozzi repeatedly interviewed him for the CQC “so people could see the very low level of the representatives we were electing.” Now she regrets ever giving him airtime.

America should learn from Brazil what happens when you give a voice to truly evil people. Studies show that efforts to limit hate speech have effectively reduced its prominence. By empowering people with undeniably nefarious ideologies, you open your country to unconscionable risk.

Fascism cannot be debated away — it must be destroyed.