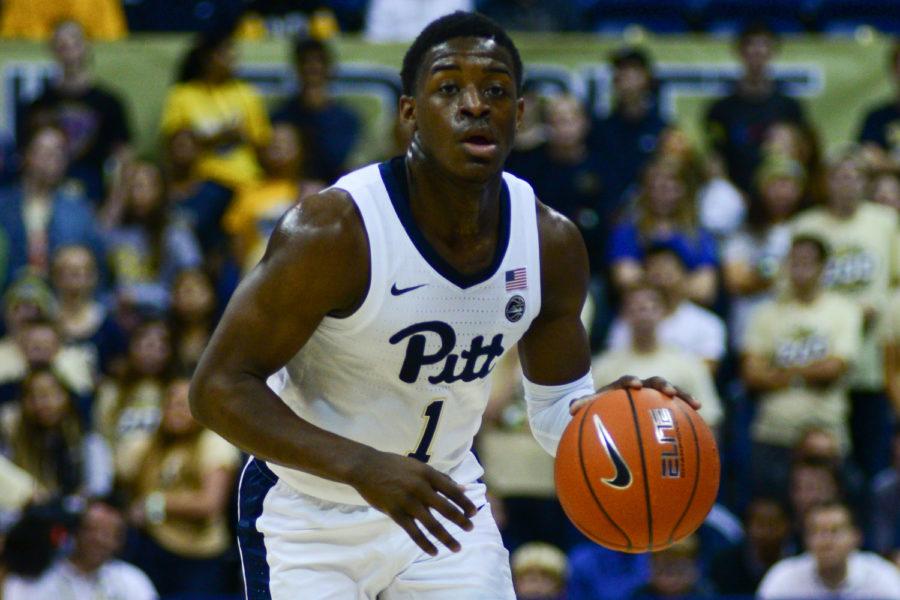 After an offseason of hype surrounding head coach Jeff Capel, his highly touted recruits and a new up-tempo offensive system, the Pitt men’s basketball team lived up to the hype in its season opener at the Petersen Events Center Tuesday night, pummeling Youngstown State 69-53.

First-year guards Trey McGowens and Xavier Johnson led the Panthers with 17 and 16 points, respectively, and the Panthers scored 27 fast-break points en route to a comfortable 16-point victory. Pitt scored a whopping 48 points in the paint, thanks in large part to forcing 20 turnovers and scoring 25 points off those turnovers.

Trey McGowens came to play in his first career college game! He had a team-high 1⃣7⃣points and helps get Jeff Capel his first W as head coach!#ZooEra (@Pitt_MBB, @jeffcapel, @Trey5mac_) pic.twitter.com/kOcHJvbP6K

That third first-year player Capel referenced was 6-foot-6 guard Au’Diese Toney, who started in place of senior forward Jared Wilson-Frame — Pitt’s leading scorer last year — who was suspended for this game due to an undisclosed violation of team rules that occurred in the offseason. Toney was impressive in his own right, leading the team with nine rebounds and contributing 12 points.

“It means a lot,” Toney said of getting the start, “because Jared plays a big part of our team. So, next man up. I had to prepare to step up in a big position, so that’s what I had to come to do tonight.”

In a surprising twist, the game featured Pitt earning as many technical fouls as 3-pointers, with two of each. But it didn’t matter, as the Panthers’ active hands and athletic guards made sure they overcame any referee drama or shooting woes.

The win marks an instant difference from last year’s team, which infamously finished 8-24 overall and 0-18 in the ACC. Those 2017 Panthers lost their first game to Navy, snapping a 20-game streak of winning season openers. This Pitt team looks to begin a new win streak, while the victory also snaps a 19-game losing streak dating back to the end of last season.

“There’s a new energy in the City and we’re just feeding off of it,” junior forward Kene Chukwuka, one of last season’s returning players, said. “Last year obviously wasn’t fun for anybody to watch, it was less fun to play in. So this year we’re just trying to really turn everything up.”

The Panthers started off the game looking sloppy, making just one of their first nine field goals and turning the ball over twice. Johnson and McGowens were the primary culprits, each starting 0-3 from the field in a case of what could have been first-game jitters.

Toney scored Pitt’s first points of the official 2018 season — a layup coming off a poke-steal by Johnson. That tied the score up at 2-2, and it would remain that way through the first five minutes as both teams struggled to make baskets.

But as the first half continued to develop, the Panthers began making plays to separate from their opponent. A dunk from junior Malik Ellison created a 6-2 lead, and a McGowens and-one layup made it 8-4. The Panthers increased their lead to 10-4 after a missed free throw and putback from sophomore center Terrell Brown.

An offensive series with 9:39 left in the half epitomized the Panthers’ play up to that point — despite a lack of execution, the effort was there. Brown missed a layup at the rim, but Toney corralled the offensive rebound for a second-chance attempt. He also missed the easy shot, but Johnson was there for another putback attempt, out-leaping YSU’s defenders to finally redirect the ball back into the basket, giving Pitt a 16-9 lead.

That effort showed up in the defensive box score. With eight minutes left in the half, the Panthers had already forced seven turnovers.

The first half also served as a learning experience for Johnson. At one point, the explosive guard poked the ball away from YSU junior Devin Morgan, but missed the ensuing dunk attempt. He found himself leading the fast break again 10 minutes later, and attempted to wrap the ball around his back to avoid contact from a defender — but he lost the ball on his way up for a turnover.

Ellison, a captain on the team, smiled at his young teammate and gently motioned his hands toward the floor, as if to say “relax.”

Pitt displayed its newfound explosiveness — an element missing entirely from last year’s team — on their next four points, which came on rim-rocking dunks from Ellison and McGowens to give the Panthers a nine-point lead.

Tensions with the referees, however, threatened to kill the Panthers’ momentum. Ellison received a technical foul for hanging on the rim a second too long after his dunk, much to the frustration of the home crowd. And after three foul calls on Pitt in close proximity to each other, head coach Jeff Capel loudly let his feelings known toward the referee — and was awarded a technical foul in his Pitt debut. The Penguins drained two of the four resulting free throws, narrowing Pitt’s lead to 24-17.

Afterwards, Pitt’s players were asked if Capel’s technical foul helped to fire them up.

“Yes sir it did,” Toney said. “You see how hungry he is about the game. The fight. That’s what we said at the beginning of the game, we need to fight. So that’s what he did when he got the tech.”

From there, the Penguins would finish on a 7-3 run, giving Pitt a narrow 27-24 lead heading into the half.

After shooting just 2-8 in the first half, Johnson came out with a vengeance to begin the second. On three consecutive possessions, he found Chukwuka for an easy layup off a pick-and-roll, drew a shooting foul and made both free throws, then slashed to the hoop and made a contested floater — making him responsible for all six of Pitt’s points to start the half.

Those buckets helped kickstart a game-changing, seven-minute long, 18-2 run for the Panthers. Pitt made six of eight field goals during that time, while the Penguins committed five turnovers and missed 10 of their 11 shots.

By the time YSU began to press, resulting in a layup for sophomore forward Michael Akuchie, Pitt had cracked open a 45-31 lead with 11 minutes left to play.

In a testament to the Panthers’ success on the fast break and in the paint, Johnson sunk the team’s first three-pointer of the game with 8:45 remaining. Pitt notched its first 20-point lead of the game four minutes later, when another and-one fast-break layup by McGowens made the score 62-42.

The Panthers coasted from there, leading by a score of 69-53 when the final buzzer sounded — thus ending the program’s 19-game losing streak dating back to last season.

“I’m excited for our guys. We have a locker room full of guys that hadn’t won a game in college in 2018, so this was their first,” Capel said. “So I was just really really happy for them, really pleased for them.”

After McGowens’ 17 points and Johnson’s 16, Ellison finished as the next leading scorer with 13 points. Johnson led the team with six assists and added five rebounds as well, while Chukwuka served as a spark plug off the bench with seven points and eight rebounds. Pitt’s smothering defense held YSU to 27 percent shooting from the field, compared to 49 percent for the Panthers.

The Panthers’ next test will come this Friday, again at home, versus VMI at 7 p.m.