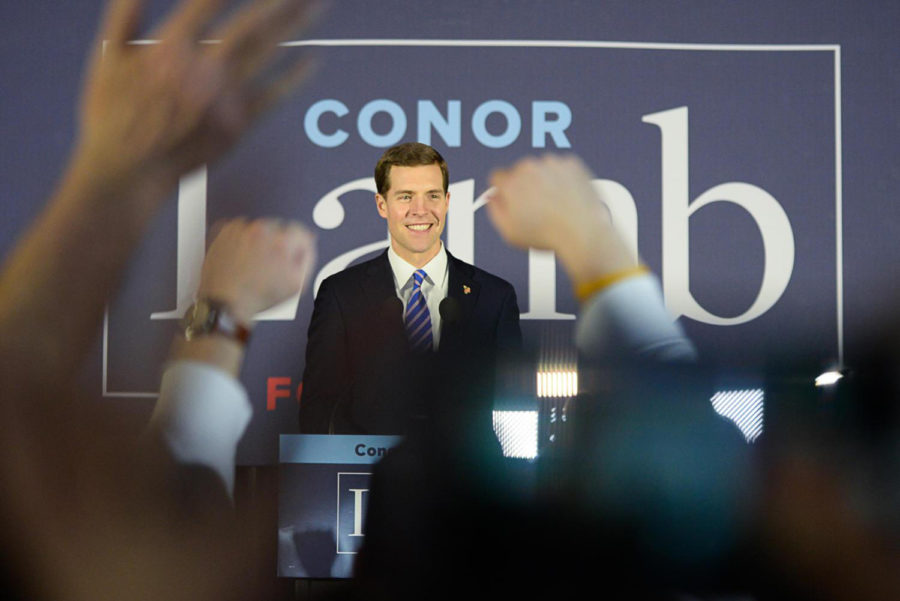 Democrat Conor Lamb gave a victory speech at in Canonsburg before he was declared the projected winner of the primary election in March 2018.

In the only U.S. House race between two incumbents — one former 18th and the other from the 12th District — Conor Lamb, D-Pa.,  took victory of the 17th Pennsylvania district over Keith Rothfus, R-Pa. With 100 percent of the vote in, Lamb defeated Rothfus 59 percent to 41 percent in the 17th Congressional District election, according to the Pennsylvania Department of State.

Many predicted Lamb’s success at the polls today. The political statistics website FiveThirtyEight slated him to defeat Rothfus by a 12 percent margin, giving Rothfus only a 4.3 percent chance of winning. An October poll by Monmouth University showed Lamb leading the race in double digits, predicting him to win 54 percent to 42 percent. This is a part of a larger Pennsylvania trend, where multiple districts were expected to go Democratic due to the state’s redrawn district lines to correct gerrymandering.

It’s because of this redrawn congressional district map that Lamb and Rothfus, both incumbents, landed in the 17th District — the only race of its kind in the country.

Lamb is much newer to the House than Rothfus, having won a special election in his former 18th District in March. Lamb’s victory at the special election was a milestone for the district, known to be hard Republican and voted in favor of President Donald Trump. Running as a conservative Democrat, Lamb built his grassroots-campaign platform on affordable health care, student loan reform and taking action against the heroin crisis.

Lamb, born in Washington, D.C., but grew up in Mt. Lebanon, is a U.S. Marine and a former federal prosecutor. Lamb’s moderate platform allowed some conservative voters to identify with his campaign — even House Speaker Paul Ryan, who called Lamb a “pro-life, pro-gun, anti-Pelosi conservative.”

Rothfus has held office since 2013 in the 12th District. The conservative, despite running in a district known to be more Republican-leaning than the national average based on prior presidential and state legislative elections, was predicted to lose to Lamb by a margin of about 12 percent. Though Rothfus hasn’t condoned President Trump, Trump endorsed Rothfus after his visit to the City last Tuesday. The Pittsburgh Post-Gazette also endorsed Rothfus.