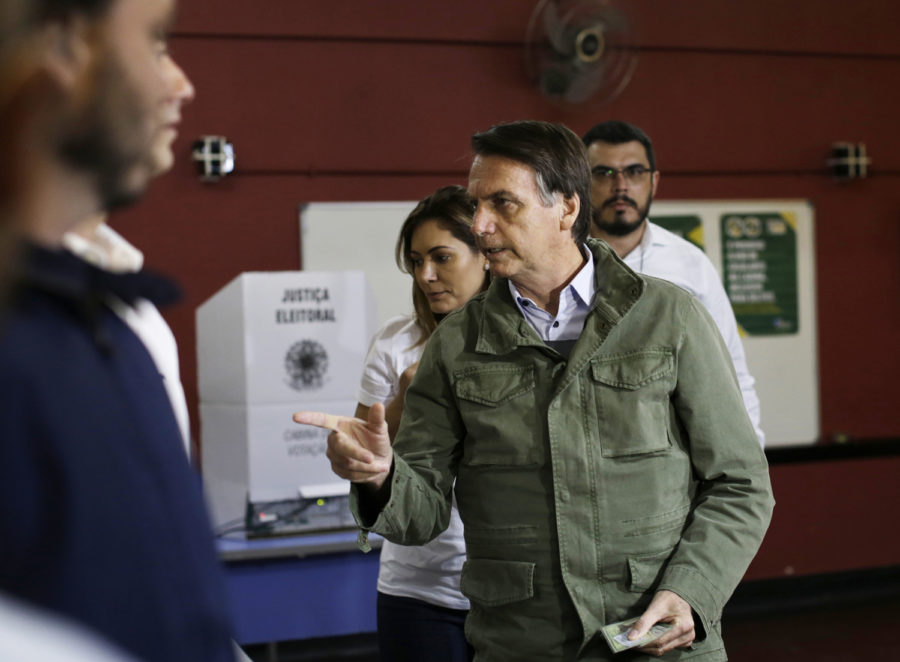 Jair Bolsonaro, ultra-right candidate for the office of Brazilian president, arrives to vote in a polling station on Oct. 28.

As we look back on the midterm elections, one shining star exists whether or not you are satisfied with the results — voter turnout is on the rise.

As a country, we have seen voting skyrocket past the last midterm election in 2014. In Louisiana early voting alone, there was a 28 percent increase in voters. Young voters in particular have gone to the polls in unprecedented numbers, like at colleges in New Hampshire, where according to NextGen vote totals had surpassed 2014 midterm totals by just 4 p.m.

And many students voting on Pitt’s campus said the far-right populist rhetoric used by President Donald Trump was one of the key things bringing them to the polls. Similar trends are occurring across Europe as well, where a sky-high number of voters pushes against populist trends.

Far-right populist candidates and parties are on the rise here in the United States and abroad in Europe. Fifteen out of 27 European countries showed a rise in votes for populism between their last two general elections. European voters tend to vote more than citizens of the United States. While far-right populism may be a dangerous rhetoric, voter turnout is increasing to fight the growing movement.

Populism generally leads to discontent among voters, driving voter engagement at the polls.

The United States has historically seen a lower voter turnout than similarly developed nations. In a study by the Pew Research Center, the number of voters in the 2016 U.S. presidential election placed us at 26 out of 32 countries. Western European countries, such as Belgium, Sweden and Denmark, had much higher voter turnout in their most recent elections. Belgium ranked first in the study with 89.37 percent of the eligible population registered to vote.

There is correlation between populist movements getting voted out and countries with a high number of voters. In a study by news website Axios, Belgium saw a 6 percent decrease in votes for populist parties and candidates in their last two elections. France, with 74.56 percent registered voters, saw a 0.4 percent reduction in populist votes in their previous two elections.

On the contrary, countries with comparatively low voter turnouts have higher percentages of those voters voting for populism. Latvia has 58.8 percent registered voters, and in comparison of their last two elections, populism is on the rise by 2.7 percent of the vote. While high numbers of people voting are met with rises in populism in countries such as Sweden, which has seen a 4.6 percent rise in votes for populist candidates, there is a stronger trend of voter turnout in countries with declining populist movements.

According to the data collected by the PRC, the United States has 86.8 percent of eligible voters registered, but only 55.7 percent of those voters cast a ballot in the 2016 election. This election was different, with a 20-percent increase in college voters from last midterms in 2014 right in our own backyard at Penn State’s campus. It’s no lie that correlation does not equal causation, but with far-right populist movements on a sharp rise, it’s no surprise that voter turnout is too.

While this election may mirror international trends, it also has international impacts. Since the Democratic Party regained control of the U.S. House of Representatives, Congress has a chance to take a second look at some of Trump’s foreign policy, such as the sanctions he levied against Iran and the swift end he put to the North American Free Trade Agreement.

In this midterm election there were many reports of voter suppression and disenfranchisement. Take the state of Georgia, for example, which practices voter purging. If registered Georgia voters haven’t participated in an election in the last two cycles, their names are automatically struck from the state’s records. Or in Pennsylvania, where the ACLU is investigating reports that requested absentee ballots weren’t sent in time for voters to complete them.

Voter suppression doesn’t stop in the United States. In Canada, a federal court ruled that electoral fraud occurred during the country’s 2011 general election. Leading up to that election, robocalls were sent to more than 30,000 voters falsely claiming that their polling locations had changed. While the same court determined the voter suppression did not affect the outcome of the election, it occurred nonetheless — a problem for the conservatives arguing that none happened at all.

These competing storylines of voter suppression and voter fraud have confusing implications in the United States. Many conservatives use inflated concerns about voter fraud to put suppressive policies in place — but the statistics don’t back up those claims, with a 2007 study declaring it more likely that a person is struck by lightning than impersonate someone at the polls.

But the rhetoric sticks. Populism is on the rise in the United States and abroad, and those claims, however false they may be, garner support. Movements are tinged with far-right-wing extremist views, and can spell dangerous consequences for minority groups. While there is cause to worry about what populist movements say about the fate of our country, there is something we can do about it.

Eligible people should vote, as they have this midterm season in record-breaking numbers, to keep their voices heard and the voices of hate out of office. After all — the best way to take back our country is to vote.