Football Prediction: Pitt will come out on top 34-26 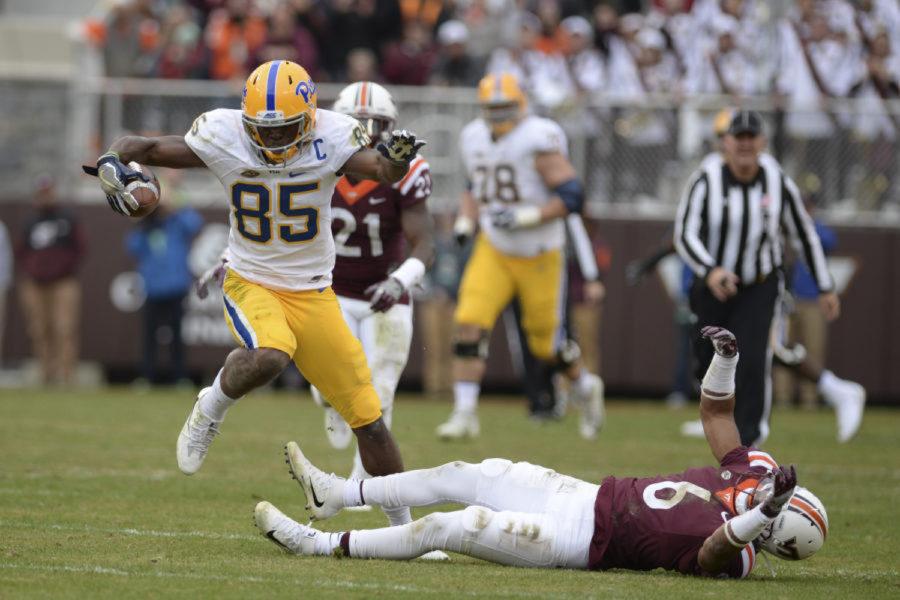 Then Pitt receiver Jester Weah broke a tackle before running to the 1-yard line in the final minutes of the Panthers’ loss to Virginia Tech in 2017.

It’s game 10 of the college football season and the Panthers have the ACC Coastal Division title right in front of them — they just have to grab it.

As Pitt (5-4, 4-1 ACC) is coming off another huge ACC victory over then-nationally ranked Virginia last Friday, it finds itself preparing for what very well may be the most crucial game of the season against Virginia Tech (4-4, 3-2 ACC) Saturday.

If we looked at this matchup four weeks ago, it would have been easy to label this as a likely loss for the Panthers. VT was 3-1 overall and ranked No. 24 in the country, heading into a home game against then-ranked No. 6 Notre Dame. Pitt then was 2-3, coming off two brutal losses to UNC and UCF. How the tables have turned.

After getting blown out by Notre Dame several games back, VT managed to squeeze out a narrow victory at UNC, but proceed to lose two extremely critical home games against GT and BC. In their last four games, the Hokies have been outscored 144-94, resulting in a 1-3 record.

Meanwhile, the Panthers have enjoyed their best four-game stretch of the season. Following a crushing loss to then-No. 13 UCF, the Panthers went on to win their next three ACC matchups. Pitt’s only loss came in a close 19-14 non-conference game against then-No. 5 Notre Dame on the road. Over this stretch, Pitt has outscored its opponents 135-114 en route to a 3-1 record.

Entering Saturday’s game, the Panthers already control their own destiny. Winning gives Pitt some room for error, affording it the possibility to split the last two games of the season and still clinch an ACC Championship appearance. But if they lose this game, the Panthers will be in a virtual tie with VT for the Coastal lead and VT will hold the tiebreaker. However, there is lot to like for head coach Pat Narduzzi’s club.

The confines of Heinz Field has greatly benefitted the Panthers this season — they’ve gone 4-1 overall and 3-0 in ACC play at home. Pitt has averaged an incredible 40.7 points per home game, due in large part to their rush attack, which has averaged 295.7 yards per game.

With Narduzzi’s heavy emphasis on a ground-and-pound offensive game plan, it’s good news that the Hokies’ defense has allowed 177.8 rush yards a game this season. But even more recently, this VT defense has gotten shredded on the ground, yielding an average of 306.3 yards per game in its last three contests.

Although Pitt’s defense has been lackluster for most of the season, it has shown signs of improvement. The Panthers had arguably their strongest performance last weekend, holding UVA to 13 points and 44 rushing yards. Even more impressive, Virginia QB Bryce Perkins, widely regarded as one of the best running QBs in the country, was held to negative-seven yards on the ground and was sacked five times.

As for VT’s ground game, they’ve struggled the last three weeks, gaining just 129 yards per game, while their season average is 166.9. Through the air, the Hokies have had better luck, as redshirt junior QB Ryan Willis has averaged 234.3 passing yards and 53 rushing yards over his last three games. In total, Willis has amassed 13 total touchdowns to just four interceptions and zero fumbles over that span.

Despite sophomore QB Kenny Pickett’s struggles this season, he hasn’t been detrimental for the Panthers. With zero interceptions over the last three games, he’s shown the ability to make a lot of smart and safe throws, and has avoided giving opposing teams an extra possession. It’s also helped the defense, as they haven’t had to defend a short field. And although he’s not throwing the ball often, Pickett has made some crucial throws, including a victory-clinching TD late in the game two weeks ago in a win over Duke at Heinz Field.

Given the way the Panthers have thrived running the ball on a heavy majority of plays, and with the VT defense struggling to stop opposing rush attacks, this Narduzzi offense could have yet another field day on the ground. Pair that with the Panthers’ success at home and it seems like they have a lot in their favor. However, we’ve seen Pitt struggle in games they should win in the past, including this year’s game against UNC. The Hokies have also won the last two meetings against the Panthers, but in their last six meetings, they’ve split, and the Panthers have won two out of three at home. On what will be their senior day as well as Bill Hillgrove Bobblehead Day, the Panthers will come out on top, increasing their odds at winning the Coastal division and a shot at the ACC Championship.