What are the odds: Pitt will run over the Hokies 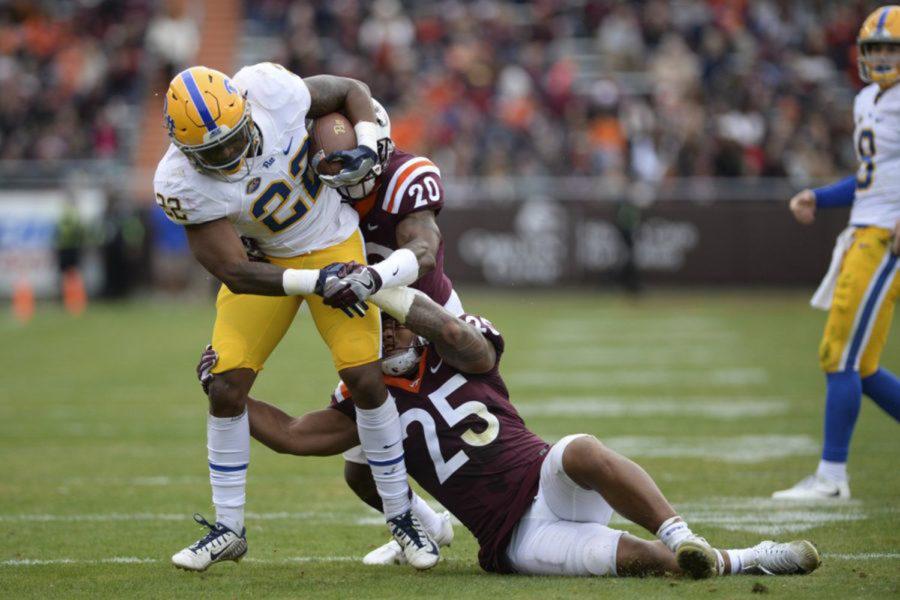 S_What are the Odds: Darrin Hall is taken down by a Virginia Tech player as he runs the ball for Pitt during the teams’ 2017 game. TPN file photo 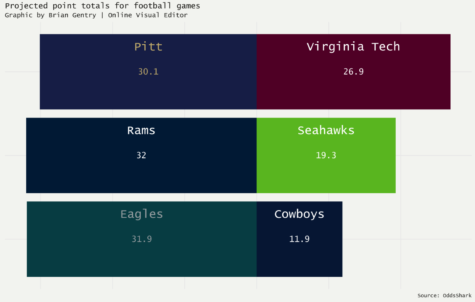 And just like that, after a poor performance last weekend and only going 2-4 in my bets, my season record is back at 0.500. I should have trusted my gut and bet on the New England Patriots winning. But instead, I went with my heart and embraced my hatred toward the Patriots, betting on Aaron Rodgers and the Green Bay Packers. Now at 24-24, the weekly odds column is ready to produce some winners.

After the Steelers dominated the Carolina Panthers 52-21 Thursday night, you should be in a good mood. Once the Heinz Field maintenance crew fixes up the field Friday, it will be ready for the Panthers to host the Virginia Tech Hokies in a big time ACC matchup. A win would mean bowl eligibility for head coach Pat Narduzzi and his Pitt team. But more importantly, it would put the Panthers one step closer to winning the ACC Coastal Division and playing for the ACC Championship.

Analysis: One win away — that has to be Narduzzi’s message to the Panthers this week. After a disappointing season last year, the Panthers missed a bowl game for the first time under Narduzzi’s reign. Now, the team is one win away from qualifying for bowl eligibility with three games left. If the Panthers beat Virginia Tech they’ll take a full game lead in the Coastal Division and set up a tentative date with the Clemson Tigers in the ACC Championship game. Expect the offensive line — including redshirt senior guard Mike Herndon, who was named ACC Offensive Lineman of the Week — to lead the way for the Panther offense again this week. Last week in the team’s win against Virginia, Herndon and co. helped pave the way for 254 rushing yards, including 229 yards and three touchdowns by ACC Running Back of the Week Darrin Hall. The Panthers will find further motivation when former running back and current Pittsburgh Steeler James Conner serves as the team’s honorary captain. Expect Pitt to play like a well-oiled machine and run all over the Hokies.

Virginia Tech has a huge task in front of them — stopping the Panther’s rush offense. The Hokies’ defense has allowed 177.8 yards on the ground so far this season. Pair that up with a Pitt offense that runs for 230.8 yards per game and it could be a long plane ride back to Blacksburg for the Hokies. Coming off a 31-21 loss to top 25 ranked Boston College, Virginia Tech is now in a tough spot if they have their eyes on a bowl game. They can’t afford a third straight loss to Pitt this weekend. Sophomore wide receiver Damon Hazelton has been a bright spot on offense for Virginia Tech, grabbing seven touchdowns and 636 receiving yards. If he can find the endzone and beat up the Pitt secondary, it could lead to a Hokie win.

Bet: Take Pitt to cover and over.

Analysis: Coming off of their first loss of the season against the New Orleans Saints last weekend, it will be interesting to see how the Los Angeles Rams adjust to no longer being undefeated. LA running back and front runner for NFL MVP Todd Gurley was held in check to only 68 yards rushing and 11 yards receiving. Gurley was averaging 100 yards rushing per game and nearly 44 yards receiving per game prior to playing the Saints. But Drew Brees was too much for LA and destroyed the Rams secondary, throwing for 346 yards and four touchdowns, exploiting a defense that had been one of the best in the league so far this season.

That’s good news for Russell Wilson, former Super Bowl champion and current quarterback for the Seattle Seahawks. Wilson has thrown for 1,791 yards and 18 touchdowns through eight games this season, connecting with speedy wide receiver Tyler Lockett for six touchdowns. They’ll look to keep that up and find success against a weak LA secondary. But in order for that to happen, the Seahawks’ offensive line will need to protect Wilson. That won’t be an easy task when they’re going up against Aaron Donald, the Rams’ defensive tackle and reigning NFL Defensive Player of the Year. Especially when the rest of the Ram’s defense is made up of notorious defensive tackle Ndamukong Suh and newly acquired teammate, defensive end Dante Fowler. Wilson will have to rely on his arm to lead the Seahawks offense and his offensive line to protect him from the Rams’ powerful defensive line.

Bet: The Seahawks will cover the spread and bet the over.

Analysis: The Dallas Cowboys finally got their top receiver after trading a first-round pick to the Oakland Raiders for young star Amari Cooper. Cooper has struggled so far this season in Oakland under new head coach Jon Gruden, but he showed up to play in his Dallas debut. Cooper caught five passes for 58 yards and a touchdown in the team’s loss to the Tennessee Titans. But his score wasn’t enough, as the Cowboys struggled to run the ball on offense with star running back Ezekiel Elliott. Elliott only had 61 yards rushing against a Titans team known for not stopping the run. The Cowboys offense will need to figure it out in Philly on Sunday night or the playoffs may be out of the question for Dallas.

The Cowboys aren’t the only team in the NFC East that picked up a wide receiver near the trade deadline. Former Detroit Lion Golden Tate has joined the defending Super Bowl Champions in exchange for a third round pick. This will be the second time Tate has played the Cowboys this season. The first was a 26-24 loss Sept. 30, when Tate had 132 receiving yards and two touchdowns. For the Eagles, Tate will line up opposite of Super Bowl hero Alshon Jeffery, making them one of the best wide receiver duos in the NFL. Getting Tate may have been the move the Eagles needed to make if they have a chance at repeating as Super Bowl champs. Whether or not this is true should be evident after a strong performance against the Cowboys.

Bet: Take the Eagles and the over.