The president who cried ‘fake news’ 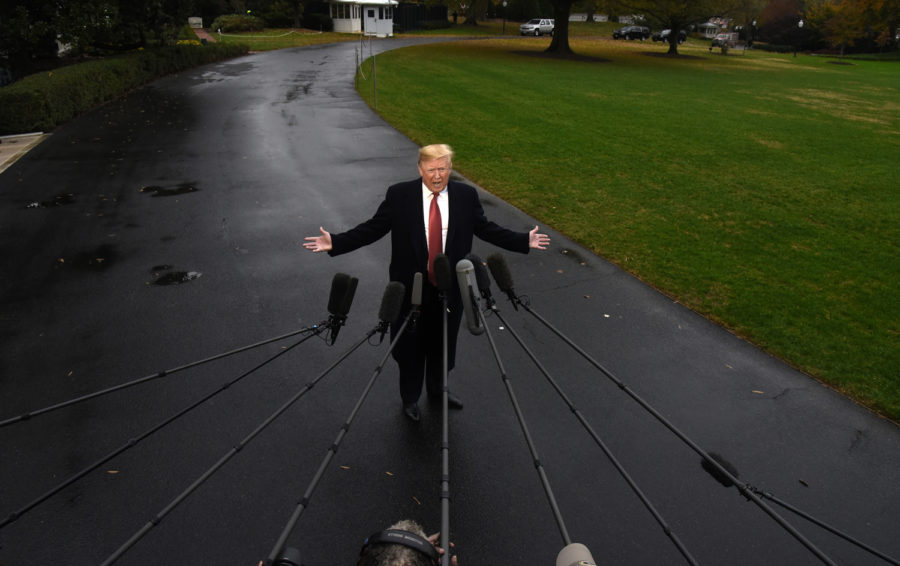 President Donald Trump speaks to the media as he departs the White House.

President Donald Trump declared earlier this month that U.S. military personnel at the border should consider migrants throwing rocks equivalent to them wielding rifles. Trump may think sticks and stones should be met with gunfire, but it seems he’s still trying to figure out what to do about words.

For now, his administration is suspending press passes and releasing fraudulent videos. Following a heated press conference on Nov. 7, Trump stripped CNN Reporter Jim Acosta’s press pass, after Acosta refused to hand the microphone to an aide in the midst of a series of hard-hitting questions from Acosta.

Trump’s tumultuous relationship with the media has quickly become a defining characteristic of his presidency. But this war against the media not only signifies a lack of respect for both the Constitution and American history, it represents a threat to one of democracy’s most basic fundamentals rights — freedom of the press.

The president has taken to calling the media “the enemy of the people,” and repeated the phrase to Jim Acosta after accusing CNN of reporting fake news — a phrase closely associated with Hitler’s Germany and Stalin’s Soviet Russia, which at the time was levied against anyone threatening the governments.

British journalist and author Sasha Abramsky theorizes Trump’s political success are attributable to widespread feelings of vulnerability among many members of the American public. Abramsky cites Trump’s racial aggression as a blatant indicator of his fearmongering tactics, which he describes as “the darkest, darkest form of demagoguery.”

“[Erdogan] has abused the press, has tried to shut down outlets,” Klaas said, “which Trump has done repeatedly in threatening to revoke licenses or attacking them or calling them out publicly to be boycotted.”

Acosta’s press pass was suspended because he disagreed with Trump and refused to back down. Not because Acosta behaved inappropriately toward an intern — which he didn’t — and not because he’s a “rude, terrible person.”

Acosta was aggressive in his questioning because it is notoriously difficult to receive a concise, relevant statement from the president. Reporters must adapt the manner in which they approach an interview on an individual basis. After Trump refused to elaborate on why he considers an incoming group of migrants “an invasion,” Acosta alternatively asked about the Robert Mueller investigation in the hopes that Trump could be more enlightening.

After the incident, Trump suggested that Acosta might not be alone in being denied access to the White House, his reason being that the White House and the presidency must both be treated with respect. And by respect, Trump means the two basic principles of every just democracy — blind loyalty and unquestioning support.

Yes, the media should be respectful, but asking tough questions can hardly be considered disrespectful. Members of the press are forced to endure constant verbal abuse from Trump because unsurprisingly, Trump’s version of respect doesn’t entail reciprocity.

When speaking of Urban Radio Networks’ April D. Ryan at a recent press conference — for which Ryan wasn’t even present — Trump said, “You talk about somebody that’s a loser; she doesn’t know what the hell she’s doing.”

As for Jim Acosta, it is unclear if his press pass will be restored. President of the White House Correspondents’ Association Olivier Knox said the organization supports Acosta and is lobbying on his behalf. “One of the things that I’ve learned from many colleagues nationally and internationally is, essentially, if they can do this today to Jim, they can do it tomorrow to someone else,” Knox said.

President Trump’s disregard for the democratic right to freedom of the press should not, and cannot, be taken lightly. Reporters shouldn’t have to worry about being suspended for doing their job. Trump’s constant accusations that major networks are publishing “fake news” are purely self-serving, not to mention widely unfounded. By exacerbating needless paranoia, Trump makes extremist values seem warranted and creates a warped sense of righteousness among his followers, both of which allow him to manipulate fundamentals of democracy — such as free press — to assert his own power-hungry agenda.

If Trump were more familiar with American history, he might try to emulate the precedents set by Presidents John Adams and Woodrow Wilson in drafting some kind of Sedition Act to regulate the press — and violate the Constitution. Hopefully no one reads a textbook aloud to him any time soon.

The greatest present danger to the American way of life isn’t approaching the border in a caravan — it’s in the White House and it’s not leaving any time soon. Acosta might be the first, but he most certainly won’t be the last. It’s time the public stops throwing rocks at Trump and starts using its Constitutional right that is currently at stake — speech. Because if we don’t act now, it might soon be too late.