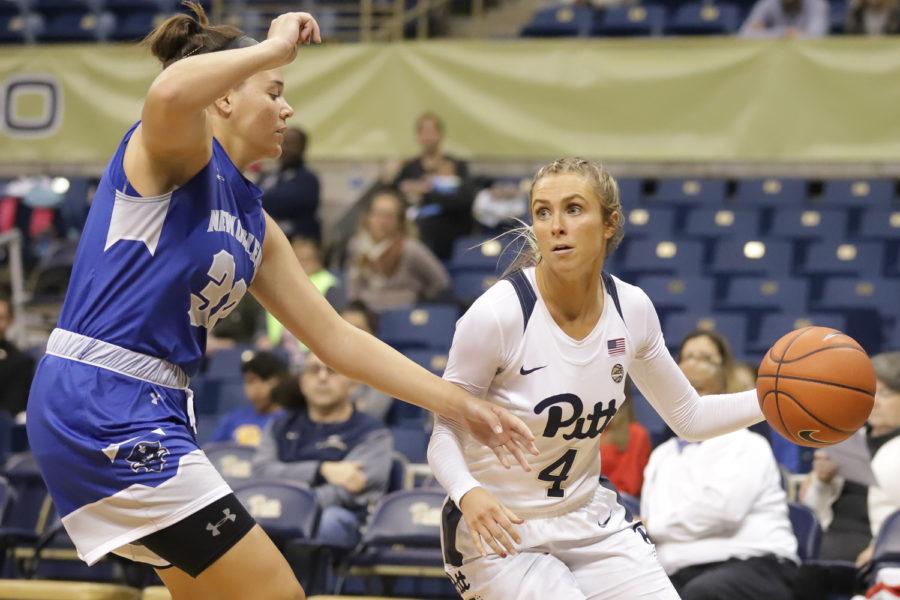 Pitt sports had an impressive weekend collectively, as all six teams playing were victorious in one way or another. On the cross country team, junior Sam Shields punched her ticket to nationals with All-Region honors, while the women’s basketball and volleyball teams dominated their opponents.

The women’s basketball team bounced back from its season-opening loss to UCF, crushing New Orleans 90-38 Friday evening at the Petersen Events Center.

In a contest that was 50-18 by halftime, depth production was the name of the game as 47 of Pitt’s 90 points came from the bench. The Panthers also forced 29 turnovers and scored 46 points off those turnovers, leading to a blowout victory.

Senior guard Cassidy Walsh led all Pitt scorers with 21 points in 23 minutes, while junior Alayna Gribble chipped in 17. The team combined to shoot an outstanding 43 percent from 3-point range, making 12 of 28 shots.

The Panthers are now 1-1 on the season, with a chance to improve next week as the homestand continues against the Youngstown State Penguins and Cincinnati Bearcats on Nov. 13 and 16, respectively.

No. 10 Pitt volleyball avenged its only previous loss of the season against Duke on senior day, sweeping the Blue Devils in front of a record crowd at the Fitzgerald Field House Sunday afternoon.

The first set was the toughest for the Panthers, with 15 ties and 10 lead changes. But Pitt prevailed in the end — winning 25-20 — and never looked back, winning the final two sets with ease by matching scores of 25-17 for the 3-0 sweep.

Sophomore Kayla Lund was the Panthers’ primary producer on offense, recording a match-high 13 kills. Junior Nika Markovic also starred all around with 11 kills and a team-leading eight digs in Pitt’s final home match of the season.

The Panthers now hold a 26-1 overall record, 14-1 in the ACC, as they head south for their final road trip of the season. They’ll face Florida State Friday, Miami Sunday and Georgia Tech the following Wednesday, concluding the regular season.

The men’s and women’s cross country teams traveled to Penn State over the weekend to compete at the NCAA Mid-Atlantic Regional meet. Shields led all Pitt runners by finishing 10th in the women’s 6K with a time of 21:29.

Shields’ performance — which earned her All-Region honors — led the women’s team to a ninth-place overall finish out of 30 teams. The men’s team also finished ninth in the 10K out of 24 teams, marking their best finish since 2006. Sophomore Zach Lefever led the way with a time of 32:15, good for 37th place. First-year Tyler Rollins and junior Nick Wolk weren’t far behind, finishing 44th and 45th, respectively.

With her finish, Shields became just the third Panther ever to earn a spot at the NCAA Women’s Cross Country Championship. No other Pitt runner qualified for the meet, which will take place Saturday, Nov. 17, in Madison, Wisconsin.

Juniors Samy Helmbacher and Valerie Daigneault represented the Pitt swim team this weekend at the inaugural ACC/Big Ten Challenge at Purdue over the weekend. Helmbacher headlined the event by winning the men’s 400-yard IM in 3:44.43 — the best time in the nation for that event this season.

Helmbacher stood out in a contest that featured top competition from each conference, but his contributions for the ACC team weren’t enough as the Big Ten emerged victorious, 179-174. Although she didn’t win any of her events, Daigneault continued her stellar production on the season by finishing sixth in the 200-yard IM with a personal-best time of 1:58.76. But the Big Ten women dominated even more, beating the ACC 251-102.

Up next, Pitt’s swimming and diving teams will compete as a whole again at the Ohio State Invitational, beginning Thursday and continuing through Saturday.

The wrestling team started off its season with a resounding victory, taking nine of 10 matches and downing Cal State-Bakersfield 32-4. Several wrestlers made their blue and gold debuts, including junior Demetrius Thomas. A transfer from Williams Baptist University, Thomas starred in his first regular-season action for the Panthers, downing fellow heavyweight Jacob Sieder 18-2 in a massive victory.

Senior LJ Bentley had another impressive debut for the Panthers — this time as a part of a new weight class, moving up from 125 to 141. Bentley cleaned house as well, beating his opponent Carlos Herrera 12-1.

Pitt’s next match will be at home against the Northern Iowa Panthers this Saturday, in a battle of the big cats.