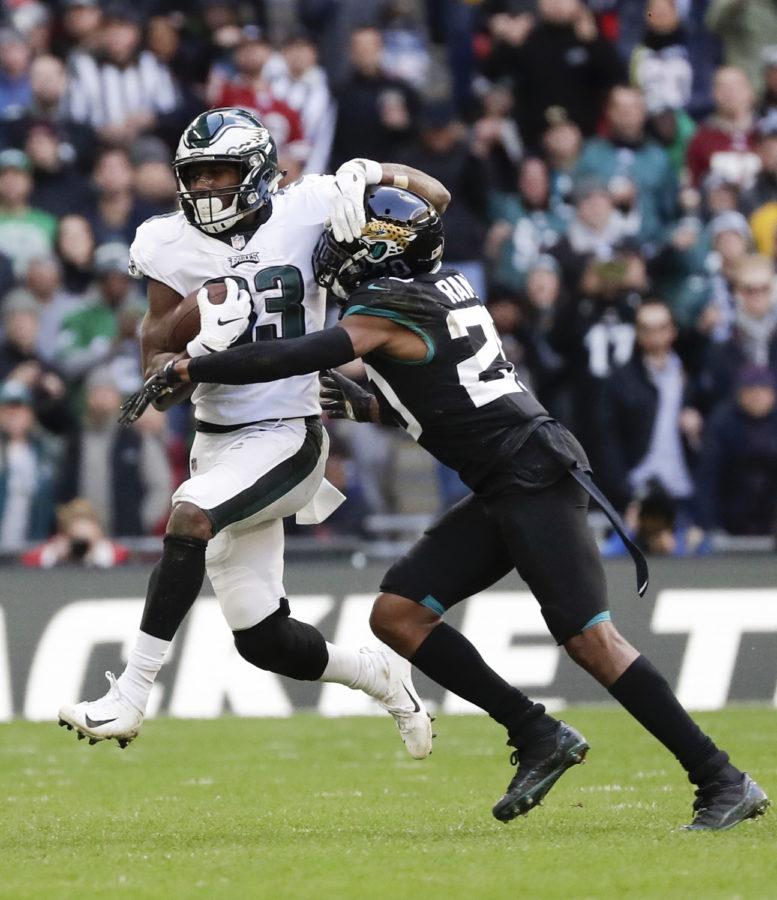 NFL’s Week 10 has concluded, which means most fantasy football players have turned their attention to closing out the season strong. Whether you are trying to secure a bye or just trying to make the playoffs, Waiver Wire Weekly is here to guide you. Be cautious setting your lineups this week as the Buffalo Bills, Cleveland Browns, Miami Dolphins, New England Patriots, New York Jets and San Francisco 49ers all have their bye week.

*The %OWN statistic is based on ESPN standard leagues from Nov. 12.

Coming off a shocking upset win over defending AFC champions the New England Patriots, Marcus Mariota is a hot option at quarterback. Since his bye week, Mariota has posted two straight games with 220-plus passing yards, two passing touchdowns and 20-plus fantasy points. Mariota’s next game is a crucial matchup against division rival Indianapolis Colts. Head coach Mike Vrabel will lean on Mariota to continue making plays both through the air and on the ground.

Despite sitting at a 4-5 record, the Cowboys are still firmly in the hunt in the NFC East. If the Cowboys have any real chance at making the playoffs, they need Dak Prescott to play at a high level. If last week is any indication, it seems Prescott is ready for the challenge. Prescott faces the Atlanta Falcons in Week 11, which bodes well for him as the Falcons’ secondary has been torn apart by injuries this season. Running back Ezekiel Elliott can open up the passing game for Prescott and with Amari Cooper on the roster, Prescott finally has a number-one receiver to execute this game plan.

It is understandable for a fantasy owner to be wary of the Seahawks’ backfield. The Seahawks have been doing a lot of plugging and playing at the running-back position since the days of Marshawn Lynch. However, a team does not invest in a first-round pick unless that player is a part of its greater future plans. That is why Rashaad Penny finds himself on this week’s list. The Seahawks used their first-round selection in the 2018 NFL Draft on Penny, but until Sunday he had been extremely quiet. Penny scored his first touchdown of the year and had his best game by far with 108 yards on the ground — and this was against a daunting LA Rams defense. Penny offers flexibility in the ground and passing game, which builds him a strong case to become the leader in the Seahawks’ backfield.

Predicting the Eagles’ backfield has become nearly impossible. Since starters Jay Ajayi and Darren Sproles were injured, the Eagles have called upon a combination of Corey Clement, Wendell Smallwood and rookie Josh Adams. Adams has received the bulk of carries in the last two weeks for the birds and has actually gotten their running game going. Even though the Eagles have a tough matchup against the Saints in Week 11, having Adams on your roster for the rest of the season would be a wise decision.

A former first-round pick, John Ross’ NFL career has been a bit of a disappointment. Coming back from an injury that put him out five weeks, Ross picked the most opportune time to make his return. His first game back was fellow Bengal receiver AJ Green’s first game out with a new injury. In Green’s absence, Ross led the team in targets and caught a touchdown. With Green out until early December, Ross is extremely important for a young Bengal receiving core. Fantasy owners should see a correlation between his increased targets and production in the coming weeks.

Maurice Harris had the best game of his career in Week 9 against the Atlanta Falcons, grabbing 10 catches for more than 120 yards. While Harris did not match that productivity in Week 10, he has proven to be one of the more talented pass catchers on Washington’s roster. Harris finds himself in good standing partly because of injuries to the Skins receiving corps, but he is still a top pass catcher on a first-place squad. Look for Harris to become one of Alex Smith’s favorite targets by the end of the season.

Jeff Heuerman has barely made any noise this season. But that changed two weeks ago when he had 10 catches for 83 yards and a touchdown, his best game of the season against the Houston Texans. Perhaps Bronco quarterback Case Keenum has found a new favorite target in the absence of Demaryius Thomas — remember the success Keenum had with Kyle Rudolph during his time in Minnesota last season.

Of all the position groups enjoying success on the Los Angeles Rams this season, the tight-end group has been quiet. Over the past two weeks, Gerald Everett has started to move away from teammate Tyler Higbee to establish himself as the feature tight end. Everett enjoyed season highs in receptions and yards last week while also adding a touchdown. Maybe Jared Goff has found a new affinity for throwing to his speedy tight end.