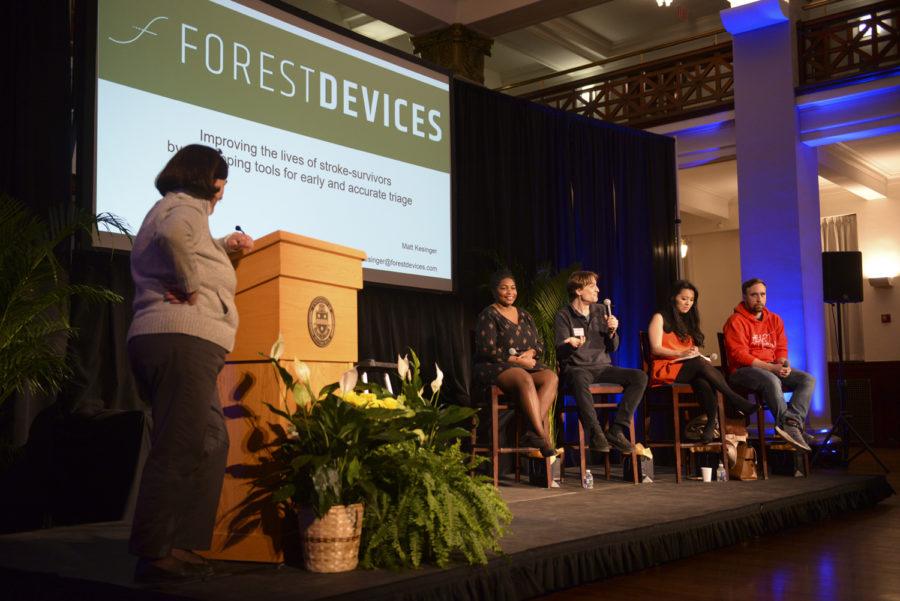 A handful of young entrepreneurs in Pittsburgh are doing more than starting up small businesses — they’re sparking hope in the community.

The University of Pittsburgh and Carnegie Mellon University joined forces to bring together entrepreneurs in a discussion regarding the outlook of startup companies in the City.

To kick off Global Entrepreneurship Week at Pitt, the Innovation Institutes of Pitt and CMU collaborated to create the Steel City Startups: Pitt x CMU event for students, faculty and alumni to network and learn more about the processes of creating a startup.

The event featured four keynote speakers who have attended either Pitt or CMU, all of whom have founded or cofounded business startups in Pittsburgh. Among them were Courtney Williamson, founder of AbiliLife, Nicki Zevola Benvenuti, founder of FutureDerm.com, Nick Flanigan, cofounder of Heart I/O, and Matt Kesinger, cofounder of Forest Devices.

The speakers discussed the inspiration behind their startups, which largely evolved from their own medical observations, research and failures.

Reflecting on the number of strokes he may have overlooked as an ambulance EMT, Kesinger said his work led him to create a tech startup to develop better ways for EMTs to detect strokes.

Williamson similarly said the lack of medical technology to help stabilize her mother’s posture, who has Parkinson’s disease, inspired her to create that technology for other people with neurodegenerative diseases.

“One of the challenges that she faced was her posture and balance,” Williamson said. “I recognized the big market need and the fact that there was just nothing available led me to found AbiliLife.”

This same issue plagues other medical fields like cardiology. Flanigan blames the inefficiency of medical technology in detecting cardiac arrest, which creates a high frequency of misdiagnoses that lead to unnecessary surgery.

“We said the reason why this exists is because there are a lot of inefficiencies with noninvasive tests in cardiology,” Flanigan said. “We said, ‘Can we do something better and can we provide the information from an invasive test and bring that to the noninvasive level?’”

Flanigan said his passion for the company adds to the external benefits of his work.

“Some people spend their entire lives searching for things that they’re passionate about and what they truly love,” Flanigan said. “Fortunately I found what I love at 23.”

Benvenuti offered a different sentiment about pursuing passion projects like her skincare company. She said there are many difficulties in achieving entrepreneurial goals, like finding the time and funding to do it.

“Do what you have to do now and then you can do what you really want to do later,” Benvenuti said.

According to Evan Facher, vice chancellor for innovation and entrepreneurship and director of the Innovation Institute at Pitt, business innovation has had a key role in transforming Pittsburgh from a steel-focused manufacturing economy to one for new startups. Both Pitt and Carnegie Mellon offer resources for students to jumpstart small businesses.

“What we’ve seen is a shift from a manufacturing economy to more of an innovation economy driven largely by the education and organizations in the region of CMU and Pitt,” he said. “It’s that spirit of collaboration that’s really lead to this activity and has lead to the success of the region.”

Beyond the benefits that the event provides the audience, Flanigan said speaking has its own benefits.

“I think this was a great event for us who haven’t had a ton of experience pitching,” Flanigan said. “I get to come up on stage in front of a lot of people … to try to flesh out some of those nerves … so when the stakes are much higher we’ll be better able to talk about what we’re doing.”

Rohil Chada, a first-year Pitt finance and accounting major, jumped at the opportunity to get his foot in the door of startup business when the speakers opened for questions. Despite going to similar entrepreneurial panels in the past, Chada felt much more connected to the speakers with whom he took the chance to talk and network at the event.