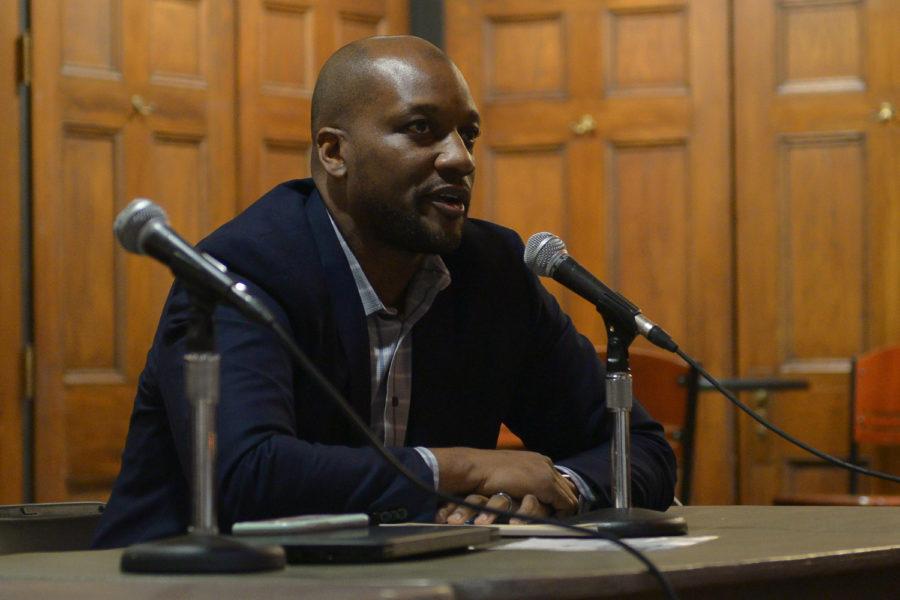 Student Government Board’s Tuesday night gathering in the basement of the William Pitt Union was, in the words of President Maggie Kennedy, “not your average public meeting.”

Six University officials filed into the seats usually filled by the board members, who joined other students in the audience to wait for their turn to ask questions in SGB’s second town hall meeting of the year. Besides one outstanding allocation from the past week, which was resolved with a quick vote before the start of the town hall, ordinary SGB business was deferred for next week’s meeting.

“These types of open forums, where we hear from students, really help us get a better sense of what students are concerned about,” Kenyon Bonner, the University’s vice provost and dean of students said, adding that they also “allow students to hear from different folks to better understand how the University operates and the people they can talk to make things happen.”

Most questions were fielded by Bonner and Steve Anderson, an associate dean and director of residence life. Also on the panel were Tom Hitter, assistant vice chancellor for policy development and management, Tyler Tenney, a policy specialist and current grad student in Pitt’s School of Education, Joe McCarthy, vice provost for undergraduate studies, and Allie Chornick, building manager of the William Pitt Union.

Questions of University transparency and student safety dominated the discussion. The first came from Matthew Walker, an English writing and economics major, who asked about University communication in serious situations.

“There are a lot of times we hear about terrible things that happen on campus or around campus from secondhand sources, rather than University administration,” Walker said.

He talked about the University’s silence on Officer Michael Rosfeld’s stint as a Pitt Police officer before he was charged with shooting of black teenager Antwon Rose II in June of this year, and the murder of Pitt student Alina Sheykhet in October of last year, to which her ex-boyfriend Matthew Darby pleaded guilty this October.

“A lot of us were expecting some sort of communication from University officials and we really didn’t get anything, but that same week we got three emails about the state budget,” he said of Sheykhet’s death.

According to Bonner, Student Affairs did put out a statement to the University about Sheyket’s death. But, he told Walker, the University still wants to make itself more transparent.

“This is one of the reasons we’re so open to doing these town halls. Students want to know more, more often, which is something that we’re open to,” Bonner said, adding, “Communication is a very difficult thing to do, especially with the University as big as it is and with things happening all the time. We try to be as transparent as possible and there are situations in which sometimes we miss the mark.”

Other students echoed concerns about University communication at critical moments. Tabitha Barnes, a junior who chairs SGB’s Diversity and Inclusion Committee, said many students she knows, particularly female students, are anxious about their safety after a flurry of burglaries in Oakland last weekend.

“One of those instances happened in my building,” Barnes said. “It’s a University-owned building, and we didn’t even know that happened until yesterday. It’s a big fault that the University itself did not come out and be upfront about it. People do not feel safe.”

Jessa Chong, who sits on SGB, added that when alerts do get sent out, they’re often not timely enough to be of any use.

“These are always delayed,” she said. “I don’t think they’re as beneficial when they happen the next day.”

Pitt has two systems for alerting students. All students are subscribed to the Emergency Notification System, which sends out alerts in emergency situations. Students have received three ENS messages since the start of the fall 2018 semester — a test of the system, a warning that there was an active shooter in Squirrel Hill and a notification once the shooter had been taken into custody.

The other system is for crime alerts, and students have to opt in to receive those messages. After several students at the meeting said they hadn’t heard about the crime alert system since their first-year orientation, Bonner took an informal poll of the audience. Most said they weren’t aware of the system.

“At least from this group of students, it sounds like we need to have more students sign up,” Bonner said. “We need to communicate how to do that.”

Kennedy, who took notes throughout the meeting, will meet with Bonner Thursday to discuss how SGB and the University can take steps on some of the concerns addressed at the meeting, she said.

“It’s important that students recognize that administrators are humans,” Kennedy said. “They’re people too. And so sometimes they might not always have the answers right away, but they do really care.”