Jewish athletes at Pitt reflect on Tree of Life shooting 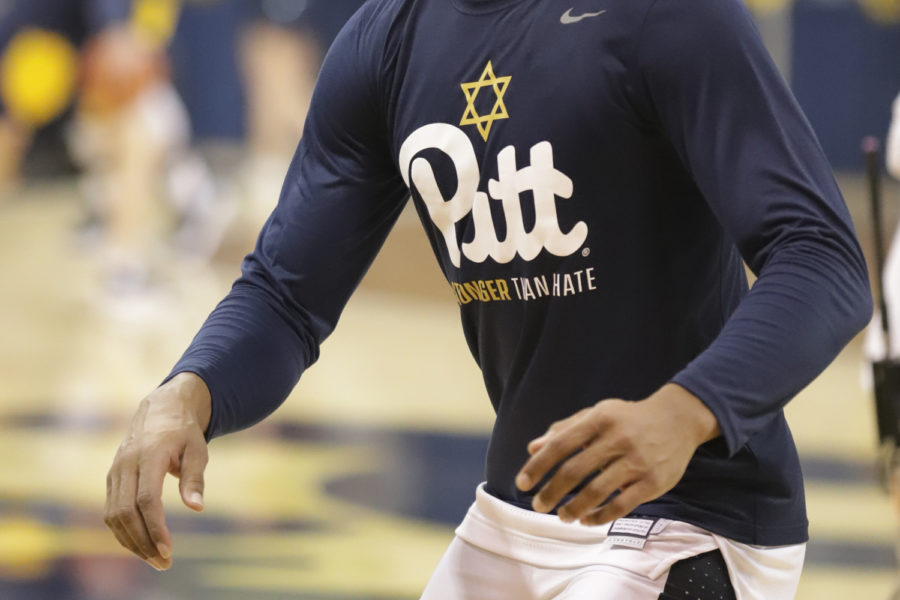 The Pitt men’s basketball team wore “Stronger than Hate” shirts while warming up before their exhibition match against Pitt-Johnstown.

Despite the football team’s 54-45 win over Duke, Pitt’s victory lights did not shine Oct. 27.

“To honor the lives lost and stand in solidarity with the community, University leadership made the decision not to light the victory lights,” Pitt spokesman Joe Miksch said in an email.

The morning of Oct. 27 seemed like just another Saturday for Pitt’s swimming and diving coach and his two Jewish swimmers.

Coach John Hargis was sitting at home watching the news, while sophomore Judd Fishman was headed toward Squirrel Hill, on his way to Target with some of his teammates.

“I noticed there was not very much traffic,” Fishman said. “Which was odd … it should have been pretty busy, so it was odd seeing the streets were so clear.”

Sophomore Shahar Menahem — another one of Hargis’ swimmers — was walking back to her apartment.

Hargis looked up the news around 10 a.m., Fishman got an emergency message from Pitt and Menahem started receiving texts from her friends back home in Israel — word was spreading there had been an attack on the Tree of Life Synagogue in Pittsburgh’s Squirrel Hill neighborhood.

“I immediately started trying to touch base with all of my athletes,” Hargis said. “I’ve got three Jewish athletes on the team now and I reached out to the two swimmers … I knew the diver was with our diving coach out of town, but I reached out to our swimmers just to make sure they were safe.”

By the time Hargis reached out to Fishman and Menahem, they already knew what was going on and were flooded with messages. Their teammates and friends from all over the world were calling and texting, just checking in to make sure they were safe.

At first, what happened didn’t sink in. It wasn’t until after Fishman called his family back in Chicago to tell them he was safe did the magnitude of the shooting hit him.

“At first I didn’t realize how significant it was,” Fishman said. “I didn’t realize on an  international spectrum how big it was. So I’m happy I got to them before they heard about it so they didn’t have to worry about me.”

Menahem was shocked. When she got back to her apartment, she and her roommates turned on the news and left it on all day, eventually finding out 11 people were killed and six were injured in the attack.

“All day I was shocked,” Menahem said. “It just — shocked is the right word.”

It’s not easy to study and swim at the same time in Israel. Menahem’s best opportunity to do both meant coming to the United States. Pitt was appealing because it had a competitive swim program and good academics.

A year and a half after moving here for college, Menahem liked it in Pittsburgh — the winters lasted a little too long for her, but she liked it.

Fishman thought Pitt was the perfect choice. It was close enough to his home in Chicago, but also a good distance away.

More importantly, Fishman wanted to go somewhere that had an accepting Jewish community. He needed to be somewhere there was a Chabad House or a Hillel Organization, so he could be with people like him and continue to celebrate the same holidays even though he wasn’t at home.

“Being somewhere where something this tragic happened, it was shocking to me,” Fishman said. “But I was very thankful that I knew the people that I know here were safe.”

Through everything, Fishman and Menahem found their swim team right by their sides. Almost every person on the team reached out to them in some way to make sure they were alright and to let them know they were there for them.

Not only did the swimmers have their team behind them, but they also had the University’s support. After the shooting, Pitt’s athletic department announced the football team would wear “Stronger than Hate” stickers on their helmets and all student athletes were given “Stronger than Hate” shirts to wear.

“It’s a signature, a symbol of unity and solidarity, and really support and love to the victims and people who suffered through that horrific tragedy that we all have great empathy for,” athletic director Heather Lyke said in a press conference Nov. 1. “Sometimes the strength of the community together overcomes something like that. The light outshines the darkness. That’s what the shirts will show.”

The T-shirt, which the men’s basketball team wore as warm-ups for their exhibition game against Pitt-Johnstown, meant a lot to the swimmers.

“It was really cool to see people with the Star of David on their shirts,” Fishman said. “Even though there’s not too many Jewish athletes, it was nice to see that they all cared and felt for the Jewish community in Pittsburgh.”

Pitt also handed out free “Stronger than Hate” shirts to its students to show support and wear to the vigil held at the Cathedral Nov. 5.

“It really warmed my heart when everyone offered help,” Menahem said. “And they made the shirts, I really loved it … and I loved when there was the ceremony, it was really touching to make us feel safe and welcomed and that we are all together in this.”

When he is swimming this season, Fishman will be thinking of those who lost their lives, their families and everyone who is suffering because of what happened.

But he and Menahem both realize what happened is bigger than sports — and if change is going to come, it will start with them.

“After that happened,” Menahem said, “it’s way more important to spread this light to the community.”