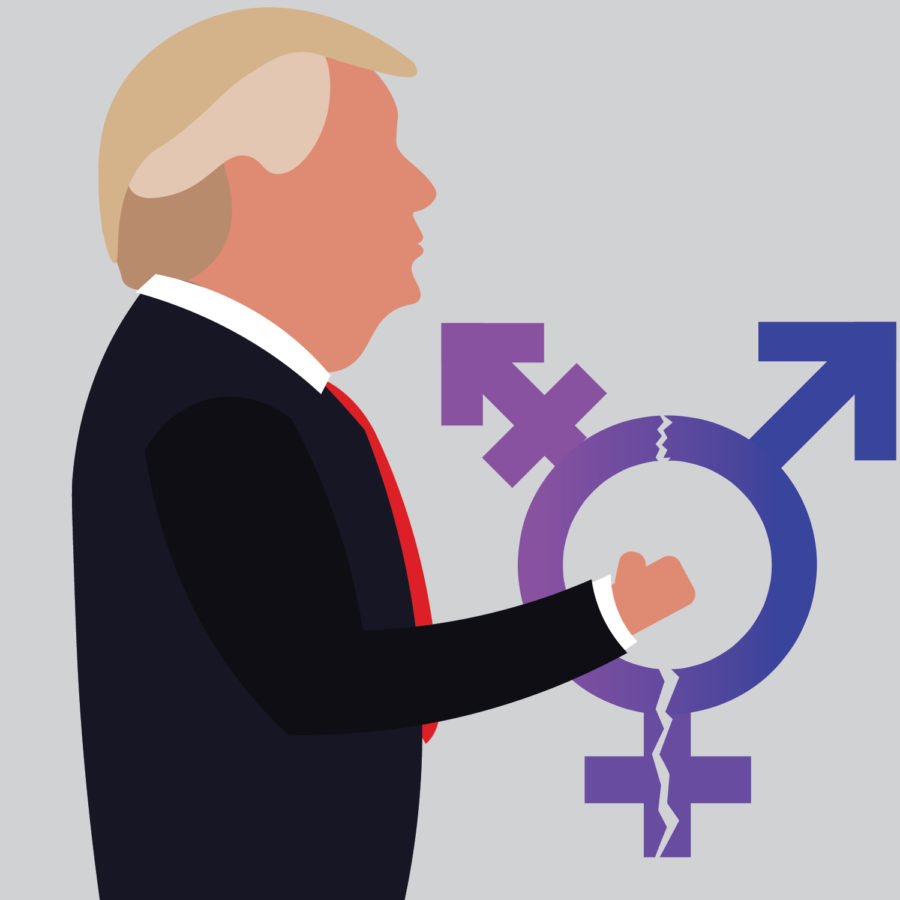 Throughout Donald Trump’s presidency, his demands for a border wall and tendency to grab women without consent have rightly earned him the labels of xenophobe and misogynist. Unsurprisingly, given a recent policy proposal, it seems he deserves the transphobe label as well.

The Department of Health and Human Services stated in an October memo that it is working to redefine gender “on a biological basis that is clear, grounded in science, objective and administrable” — essentially defining sex based on genitalia at birth, and disregarding the concept of gender identity completely.

But if the department believes its proposal is so grounded in science, it should think again. Non-binary gender identities are well documented in the scientific community and cultures around the world — and policies that ignore or disregard these natural, cultural norms pose a huge threat to the safety and well-being of transgender people.

The policy proposal first and foremost fails to distinguish between sex and gender. Sex is defined along biological lines, usually determined by an individual’s genitalia, whereas gender is both psychological and social, and used to refer to men and women in a social context.

Many transgender individuals face mental health issues due to what’s known as gender dysphoria, a conflict between a person’s assigned gender and the gender they identify with. Psychology Today says that nearly half of those who identify as transgender experience some form of depression and anxiety. And a study published by The Lancet attributes these statistics to feelings of discrimination, lack of acceptance, stigma and abuse they face daily. The attempted suicide rate among transgender people is 41 percent.

Being transgender is a huge emotional burden in a culture that doesn’t accept that as legitimate — but there are many societies that do recognize and grant legitimacy to transgender people’s gender identities.

Take for example the Navajo tribe, which recognizes genders besides male or female and even believe those individuals have wisdom beyond other members of society because they are “two-spirited.” In Samoa, fa’afafines are another example of those who defy Western gender norms — in Samoan tradition, fa’afafines identify as female despite being born with male anatomy, but aren’t considered male, female or even transgender.

“Gender roles, even sexual desire, is shaped to suit society. That means gender identity is often hugely shaped by culture,” an unnamed Samoan fa’afafine told Global Citizen. “Being a woman in Samoa is quite different from being a woman in Western society,”

Not only is transgenderism a cultural phenomenon that spans societies across the globe — it’s an identity the scientific community believes to be legitimate.

“It’s not ‘I want to be a girl’ or ‘I wish I was a girl.’ It’s ‘I am a girl,’” Dr. Erin Belfort, a child psychiatrist, said. “Gender identity is such a core part of who we are and it’s established in toddlerhood. It’s not a choice. It’s not a lifestyle.”

The Trump administration’s definition is even too rigid to accommodate all of the accepted biological sexes — namely, intersex, a term used to refer to a variety of conditions in which people are born with genitalia that don’t match male or female.

“The idea that a person’s sex is determined by their anatomy at birth is not true, and we’ve known that it’s not true for decades,” Dr. Joshua D. Safer, an endocrinologist and executive director of the Center for Transgender Medicine and Surgery at Mount Sinai Health System in New York, told The New York Times.

Creating an atmosphere of positivity and inclusivity is crucial for our transgender and gender nonconforming friends. Instead of defining transgender out of existence, the government should work to eliminate the prejudice and abuse that the transgender community faces.

This policy would reverse Obama-era policies put in place to recognize trans people’s rights. Under the Obama administration, many public areas such as prisons, homeless shelters and schools recognized transgenderism as an effort to eliminate the exclusion and prejudice that affect the trans community — but Trump’s policies would reverse all that progress.

Neither gender or sex is as black and white as Trump thinks they are — they’re both nuanced and complicated. People should have the right to choose how to identify and express themselves. And if Trump chooses to push against those basic freedoms, he is yet again responsible for blatant disregard of our most basic human rights.