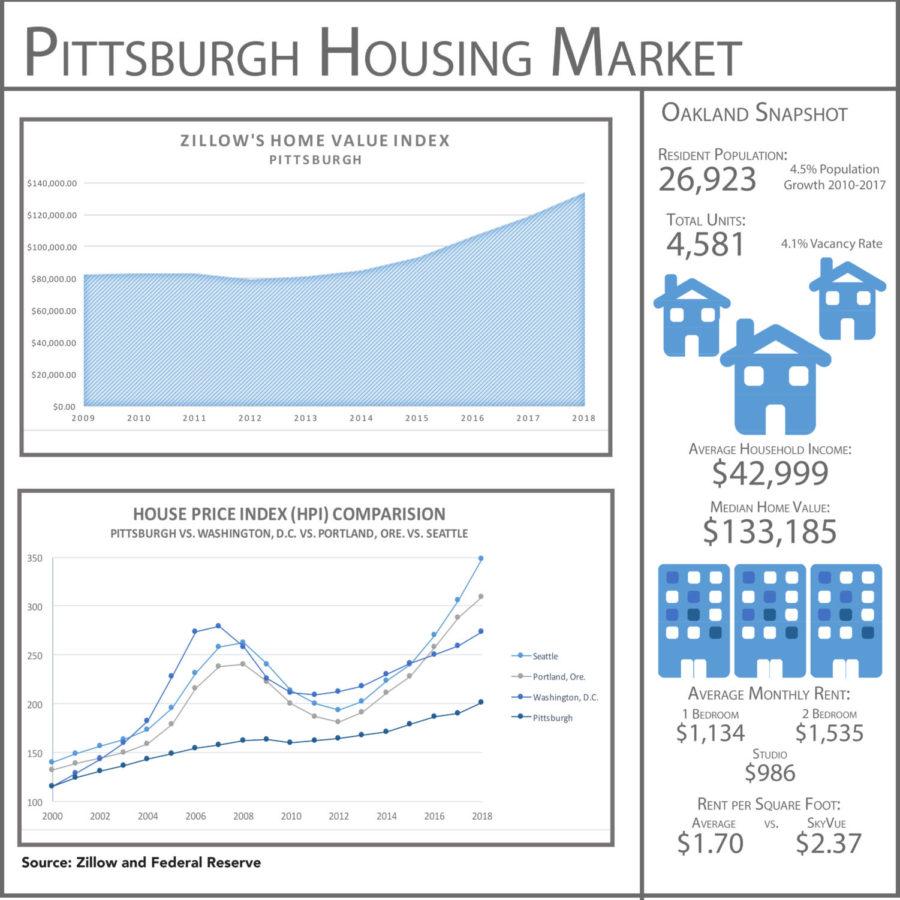 As new luxury apartment buildings rise over Oakland’s skyline, gentrification and rising rents may also be on the horizon.

In recent years, Forbes and Fifth avenues and the corner of Craig Street and Centre Avenue have become homes to several luxury apartment construction sites in Oakland, leading to questions from students and housing analysts about whether a good quality of living at an affordable price will be available in the greater Oakland area in the future.

SkyVue Apartments, a 389-unit building located across Forbes Avenue from UPMC Magee-Womens Hospital, was completed in 2016. Only two blocks away, The Bridge on Forbes will open in fall 2019 with 197 units.

Also joining the housing supply is the City’s second-largest apartment building still under construction, One on Centre — originally launched publicly as The Empire — with 329 new units across 17 floors at the corner of Craig Street and Centre Avenue in North Oakland.

The construction has elevated concerns of increased gentrification and the potential effects on rent pricing near Pitt’s campus. But according to Craig Wack, a spokesperson for the One on Centre’s parent company, Greystar, the complex is filling a gap in the student housing market.

Dr. Michael Glass, a professor in Pitt’s urban studies program, is worried about potential effects from the new housing, such as neighborhood conflict or large-scale demographic changes. However, he believes the new construction may not be entirely to blame for rent hikes.

“One of the terms that’s sometimes used to describe the housing situation adjacent to university districts is … ‘stugentrification,’” Glass said. “I don’t think it’s necessarily just the arrival of the new housing … that’s causing the cascading effects of decreasing housing affordability. It’s just the general desire of students to want to be within proximity of where they have their classrooms and social spaces.”

A different measure of the change in Pittsburgh housing prices, quantified by an index from the Federal Reserve Bank of St. Louis, has found a similarly large increase — 23.9 percent — from the second quarter of 2009 through the first quarter of this year.

Some students are beginning to feel the rent pressure, and others have begun to notice the polarizing effect between apartment classes near campus.

Natalie Stadler, a junior studying communication, is in favor of living off-campus, but is wary that the new construction won’t help chip away at a shortage of more affordable apartments in Oakland. Stadler currently lives in a three-unit apartment building on Dawson Street in South Oakland with a roommate.

“I definitely think it’s way cheaper to live off-campus,” Stadler said. “But I just think in terms of off-campus housing … you can get a really cheap place or a really expensive place. There’s nowhere in between that’s a comfortable price for a nice quality of living.”

This lack of mid-range-priced apartments, coupled with an overall increase in rents, may be starting to have an effect on whether students choose to live in Oakland. Some have even decided to live in neighborhoods beyond Oakland, commuting to campus every day.

“[Students] are willing to be in different places like Friendship, Shadyside — even parts of Lawrenceville, if they can afford it — to a degree I haven’t seen in previous years,” Glass said of his students.

Matthew Gillespie, co-author of the CBRE report and production analyst for debt and structured finance, is optimistic that the housing market will eventually return to a pricing equilibrium.

Gillespie believes the new developments under construction are part of the solution to the shortage of housing in the greater Oakland area.

“So far, they have absorbed well, meaning that they are well-occupied,” Gillespie said. “So I do think they are helping with the undersupply.”

In South Oakland, however, students trying to make the best of their situations are faced with the real-world consequences of the market’s current state — another round of hikes to their rents in the near future.

“Whenever a neighborhood undergoes significant change, whether it’s the average price point for housing in that area, or if it’s a new community coming in … that can really lead to a lot of, uh, different types of antagonism,” Glass said. “You want to avoid that because that can lead to some really bad neighborhood conflicts.”