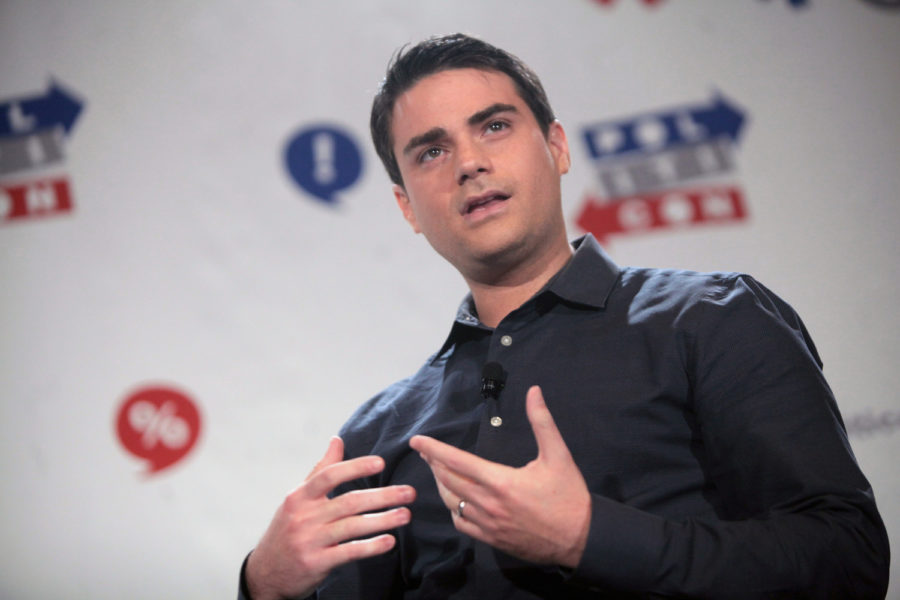 Ben Shapiro spoke at the 2016 Politicon at the Pasadena Convention Center in Pasadena, California.

By Emily Wolfe and Andrew O'Brien

On his tour of college campuses this fall, conservative author and political commentator Ben Shapiro has spoken to sold-out rooms on visits that have become famous for protests and controversy.

His visit to Pitt Wednesday night was no exception when it came to audience size — Shapiro spoke to a sold-out crowd in Alumni Hall about the Tree of Life shooting and his experience of anti-Semitism on both the right and the left.

The event was hosted by the Pitt College Republicans and sponsored by Young America’s Foundation, the conservative youth organization backing Shapiro’s campus tour around the country. Tickets for the event were made available to students with a valid Pitt ID for free at the end of October, which sold out quickly.

Shapiro initially spoke for about 15 minutes on anti-Semitism and the hate crime at the Tree of Life synagogue. He said it’s sometimes difficult to protect people from events such as the massacre.

“The big mistake that people make about the government is that they think the government can solve all of our problems,” Shapiro said. “It can’t protect us from every bad thing that is going to happen in our lives.”

Afterward, Shapiro accepted questions from students in the audience. Some — like a student who challenged statements Shapiro had made about transgender suicide rates  — openly disagreed with Shapiro’s politics, while others asked him to explain his thoughts about net neutrality and gun control.

Although Shapiro’s visits to college campuses are often met with heavy student protests, backlash Tuesday night was limited and quiet. A group of students staged a peaceful protest outside of Alumni Hall before the event, where they held a rainbow banner that read “Our Judaism Values Everyone Except Fascists.” The demonstration was followed with a teach-in at the William Pitt Union where students and community members spoke about anti-Semitism and “neo-fascist rhetoric.”

Nick Giangiulio, a senior studying philosophy and philosophy of science, stood with the protesters from the beginning. He said peaceful protesters help break down misconceptions that liberal protests are disorganized and angry.

“[Shapiro is] someone who wants to kick up a lot of dust and bait people into becoming this stereotype he’s trying to paint,” Giangiulio said. “We tailored our tactics towards who Ben Shapiro is and the audience he was trying to cultivate.”

Another complication arose earlier Tuesday when YAF threatened to sue Pitt after the University imposed a $5,546.52 security fee for Shapiro’s visit. The fee was high because of concerns about expected “controversy” and “protests,” YAF said in a statement, adding that though the organization would pay the fee, it intends to “explore all legal remedies including litigation.”

Some students at the event thought the added security fee was unfair. Pitt senior finance major Chris Booth, a fan of Shapiro’s podcast, said while he disagreed with the fee, he was still excited to hear viewpoints not often heard on campus.

“I’m hoping to hear some different viewpoints that we don’t hear a lot on [Pitt’s] campus,” Booth said. “It shouldn’t be YAF’s fault that people are too intolerant to let a man speak, but that’s just how it is nowadays.”

Another attendee, Charles Machiko, said his own school  — Washington & Jefferson College in Washington — suffers from a lack of diverse opinion. Machiko and some friends made the 45-minute drive early this afternoon to be some of the first in the standby line for people who would be let in after ticket-holders.

“I think college campuses need to have a diversity of ideas. I’ve experienced that firsthand [in class]. I was shut down because the teacher was a liberal,” Machiko said.

Shapiro’s fans are aware of his controversial reputation, but many think he’s mischaracterized. Jordan Koupal, a senior studying economics at Pitt, said the misconceptions of Shapiro are humorous.

“I think there’s a lot of misconceptions that what he says is hateful. It’s laughable that people think that,” Koupal said. “He really knows what’s going on.”

Solomon Heisey, a sophomore business information systems major, stood in line for Shapiro’s lecture across the stairs from the protest. Heisey agrees with much of Shapiro’s politics but said he respected the protesters’ rights to express their own views.

“[Shapiro is] Jewish. I don’t think he really represents fascism,” Heisey said. “But they can believe in whatever they want.”