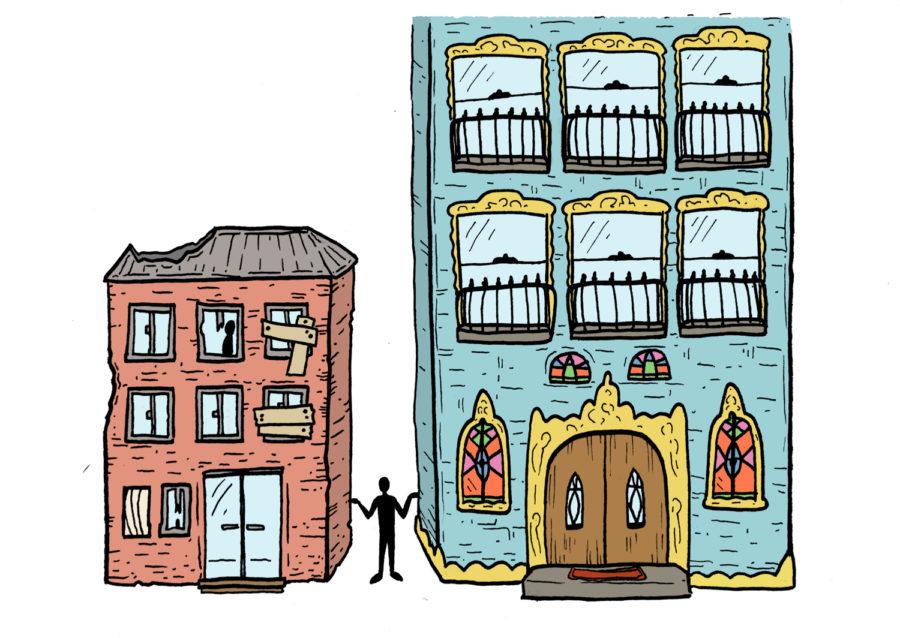 By Mackenzie Oster, For The Pitt News

House and apartment hunting in Oakland leaves many students on the fence about where they’re going to reside the following school year — especially since the neighborhood has come to offer a narrow selection of decent student housing opportunities at this time of the year.

Much like other Pitt students, I recently endured the hunt for where I’ll settle next year. In my most recent apartment visit, I was pleasantly surprised by the cleanliness of the apartment. My roommate and I decided it would be an acceptable place to spend our sophomore year.

The $650/month rent for each of us didn’t include utilities and seemed pretty expensive considering the various holes in the walls and worn-out carpet. But my roommate and I were desperate to secure a living space, so we decided to sign the lease.

The night before signing, we decided to check out the reviews on the apartment. Almost every review left a one-out-of-five star rating. Residents were enraged that only one out of the several buildings had laundry and that laundry cost $4 per load. They also spoke heavily of the unresponsive management when it came to repairs and requests.

One particular review accounted an incident of mold in the apartment’s walls, causing a resident to be hospitalized. We decided not to sign the lease and kept looking.

This time of year, students compete neck and neck to secure their living space for the following year. The pressure to secure a lease is so immense and it isn’t easy to find a moderately priced place to live in Oakland.

Oakland offers a slim selection of housing options. When touring, you’re likely to find two levels of housing. The first is a run-down apartment or housing complex that most likely lies in the depths of Central Oakland. Apartments and houses typically come unfurnished, without utilities included in the rent and in poor condition for those moving in.

“Unless you have a connection to someone that has a nice house or apartment and can personally hand you the lease,” sophomore Arthur Xiao said, “there’s a really slim chance that you’ll find a place that isn’t immensely run-down and in poor condition, because there’s thousands of students competing for the same few nice places that exist around here.”

The second and more recent development in living situations in Oakland is the addition of luxury living. Housing situations such as SkyVue apartments and The Bridge on Forbes offer a grand perception of student housing. These apartments are located on Forbes Avenue, catching the eye upon first entering Oakland.

However, residents pay the price for the accessibility that the two buildings offer. The going rate of such luxurious living starts at around $1,600 a month for a one-bed, one-bath studio apartment and can range up to $3,000 for a three-bed, two-bath apartment. The apartments advertise their high-class amenities, highlighting the “granite countertops, wood floors in common areas, and plush carpeted bedrooms.”

Affordable housing is something that concerns the majority of students. Seventy-one percent of all students graduating from four-year colleges in 2010 had student-loan debt. Students who pay in-state tuition at Pitt have the advantage of paying about $10,000 less than those who come from out of state, and roughly two-thirds of Pitt students are in-state residents. First-year Jacob Kefalos said that factored into his decision to attend Pitt.

“Personally, I chose to stay in-state for college because it would mean that I would save around $10,000 a year, which is a significant amount when added up over the course of four years,” Kefalos said. “Staying in-state will leave me paying less in student loans in the future.”

The residents of Pitt’s newest and nicest dorm building, Nordenberg Hall, pay about $600 a month, which is $3,675 for the semester, making it the most expensive rooming situation offered. Because living on campus is typical for a first-year student, people pay the price without much complaint. However, finding a moderately priced and nice apartment to reside in for the remainder of college on the outskirts of Oakland is now much harder to achieve.

The addition of SkyVue apartments and The Bridge on Forbes are huge infrastructure projects. Pitt was not affiliated with the incorporation of such grand living additions. But rather than adding the infrastructure of such expensive and outrageous student living opportunities, it would be much more efficient if landlords took it upon themselves to renovate their properties in order to compete with these luxury student living additions.

Repairing the infrastructure that currently stands would benefit the landlords, making their properties more attractive in a market that includes new grandeur apartment complexes. This would result in more moderate living opportunities for student residents. The money saved repairing the current living environment will allow for the landlord’s properties to remain appealing to more students and stay competitive on the market.

In the meantime, students should take caution and be sure to tour and inspect the living space before signing any leases. Keep in mind that landlords know students when they see them and most likely assume that a parent is helping to pay. So know what price range is affordable going into the tour, ask as many questions about the complex as possible to address any potential problems and get a feel for the reliability of the landowner.