Trump’s inadequate response to the Tree of Life shooting 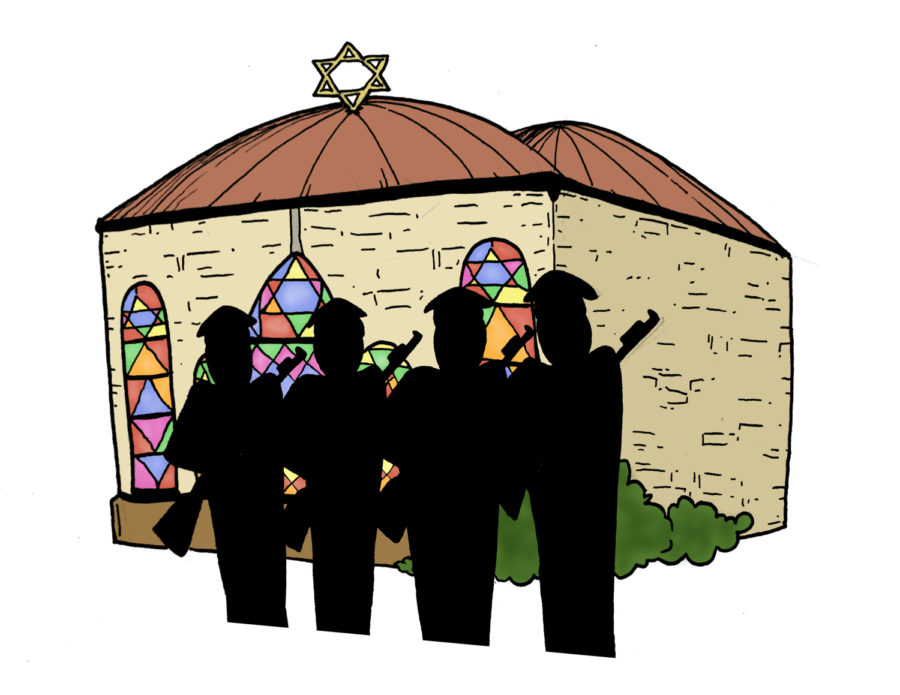 By Mackenzie Oster, For The Pitt News

Incidents of mass shootings are undoubtedly on the rise. The most recent, at Thousand Oaks Bar and Grille in California on Nov. 2, resulted in a dozen people dead in the 307th mass shooting this year alone.

Unfortunately, such incidents are only becoming more and more common in our nation’s history. In these chaotic and fearful times, citizens tend to look to their leader for guidance and the comfort of a promise to implement policies that would prevent similar tragedies. With the rising rates of mass shootings, President Donald Trump faces pressure to provide answers on how to combat this massive problem.

However, Trump’s initial response to the Pittsburgh shooting was to suggest the addition of armed guards in places of worship and a stricter implementation of the death penalty. Both of Trump’s suggestions model the behavior that they seek to prevent — the addition of more violence and death to society.

“If there were an armed guard inside the temple, they would have been able to stop them,” Trump said only hours after the Tree of Life shooting. Rather than suggesting productive ways in which the country can prevent an event like this from recurring, he decided to assign blame to the victims of the recent attack.

The Tree of Life shooter, Robert Bowers, was carrying an AR-15 assault weapon along with three Glock .375 handguns when he carried out the attack. Unless an armed-guard were to equipped with similar forms of defense, it is unlikely that the outcome would be any different.

And the presence of an armed guard is no guarantee that no one else will get hurt — the armed deputy at Marjory Stoneman Douglas failed to enter the building at the time of the shooting, let alone stop the active shooter. In fact, data has shown that the presence of an armed guard is actually proven to increase the risk of violence — besides serving as a sight that would be extremely unwelcoming to all who attend places of worship to practice their faith.

When reporters asked the president how he planned to move the country forward after the Tree of Life shooting, Trump’s response was that the “world is a violent world.” His statement highlights the obvious and does nothing to progress the prevention of such violence. The places people go to practice their given faiths often serve as the safe haven for many people’s lives.

“On a day like today, the door is open,” the past president of the Tree of Life Synagogue told KDKA the day after the shooting had occured. “It’s a religious service, you could walk in and out.”

The second idea the president presented was the action of “stiffening up our laws in terms of the death penalty.” But whether the death of the criminal is carried out by the law or not, the consequence of the death penalty isn’t likely to deter a mass shooter, considering that they have made the decision to place themselves in the life-threatening position.

“FBI Unified Crime reports show that states with the death penalty have homicide rates 48 to 101 percent higher than states without the death penalty,” according to Psychology Today. “One reason why the death penalty might not deter criminals is that most murders are committed in a fit of rage, after an intense argument, when people rarely consider the consequences of their actions.”

In most accounts, the shooter doesn’t make it past the incident of the crime to see justice. Adam Lankford, an associate professor of criminal justice at the University of Alabama, carried out a study at the New York City Police Department, accounting for the statistics of active shootings between 1966 and 2010. Within the 185 accounts of mass shootings, the perpetrator was killed in 48 percent of incidents, and 38 percent of this was by their own hand.

Not only did the president’s response to this shooting not consider preventing future occurrences, it was highly inconsiderate to those affected by the tragedy. While families mourn the loss of their loved ones, one of the most comforting things to settle upon is the hope that other people will not have to suffer in similar situations. Unfortunately, Trump’s response provided no foundation for such a hope.

Representatives of the City of Pittsburgh sent a letter signed by thousands of people across the United States to Trump requesting that he hold his visit, but this had no impact on his agenda. He planned the visit on the same day as the first funeral of a victim. Members of the Jewish community also wrote Trump a letter, informing him that he is not welcome in the City until he works to “fully denounce white nationalism.”

Pittsburgh Mayor William Peduto responded to the president’s planned visit saying, “I do believe that it would be best to put the attention on the families this week, and if he (Trump) were to visit, choose a different time to be able to do it … our focus as a city will be on the families and the outreach that they’ll need this week and the support that they’ll need to get through it.”

Trump disregarded Peduto’s request and visited on his own terms. His visit to Pittsburgh sparked protests from thousands of citizens that paraded throughout the City.

The president’s response to this massacre was fundamentally flawed and showed his insensitivity in the face of tragedy. His actions mimicked his response to past shootings, which lie within the tendency to speak but not act and to blame the victims, as he did in the Parkland shooting. As the City of Pittsburgh recovers from this tragedy, it’s becoming more and more evident that the route to change lies in the hands of the citizens of America to organize and vote for the change that is desired.