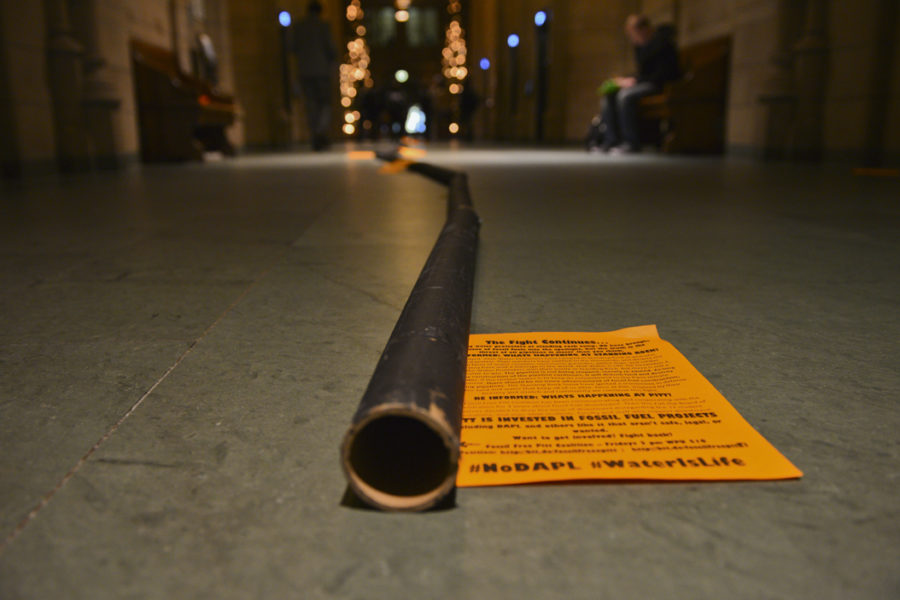 Members of the Fossil Free Pitt Coalition set up a cardboard “pipeline” in the Cathedral in Dec. 2016 in protest of the pipeline on Standing Rock's reservation in December 2016. Stephen Caruso | Senior Staff Photographer

On Wednesday evening, the newly formed Socially Responsible Investing Committee held its first open forum to gather opinions concerning where the University should invest its $4 billion endowment, particularly whether it should consider socially responsible investment initiatives.

Many community members came to voice their concerns about the University’s use of its endowment, but one subject that was brought up several times by community members, faculty and students alike was Pitt’s investments in the fossil fuel industry. An overwhelming number of attendees stated they believed the University should divest from fossil fuels, for both moral and economic reasons.

Considering the urgency of the fossil fuel industry’s consequences on our health, climate and environment, the community’s concerns with the University’s fossil fuel investments demand immediate response from the University. Pitt’s decision to divest or to continue its financial backing of the fossil fuel industry will reveal where its priorities really lie — the security of our future, or the growing of its wealth through precarious means that pose a threat to the economic and environmental health of our immediate community and the world at large.

The Paradise Papers, made public last year, revealed the offshore investments of thousands of corporations worldwide. According to the Guardian, the papers revealed Pitt’s own investments in EnCap, a hedge fund that has put over $20 billion into oil and gas companies — some with ties to fracking in Allegheny County.

Student organizers with the Fossil Free Pitt Coalition, which was formed in 2015 and has the backing of over 50 SORC organizations, have demanded that the University pull its investments out of fossil fuels and into industries that promote a more sustainable, equitable future. While FFPC’s demands have regularly been met with silence from the University administration, this past year the coalition won one of its asks — the creation of the Socially Responsible Investing Committee. While the creation of this committee and its holding of a public forum does show a step in the right direction, whether the University follows through in listening to the public and actually reassessing the ethics and sustainability of its investments remains to be seen.

Pitt students are not alone in their mission — students on university campuses across the country began the fossil fuel divestment movement in 2010 to pressure their administrations to retract their investments in fossil fuel companies, which the universities use to grow their endowments. These efforts have not been futile — divestment campaigns at Syracuse, Rhode Island School of Design, the New School in New York and Chatham have all successfully pressured their administrations to pledge to divest from fossil fuels.

The urgency of divesting from fossil fuels has become increasingly apparent in light of recently released environmental reports. In September, the National Highway Traffic Safety Administration released a report defending the lifting of the Obama administration’s fuel-efficiency standards for vehicles built after 2020. What was most concerning about the report, however, was its projection of the future — assuming we continue to burn fossil fuels with no cutbacks, the Earth’s temperature will rise by 7 degrees Fahrenheit by 2100.

The Intergovernmental Panel on Climate Change also recently reported that only 12 years remain to keep the Earth’s temperature increase to the 1.5 degrees Celsius limit set by the Paris Climate Accords — meaning we have only a dozen years to make drastic changes to how we approach energy production, or else face disaster. The direness of the situation cannot be overstated, but changing the system can begin right on our campus. Universities that put money into sustaining these corporations must be held accountable for their contributions to climate change.

If anything about our future is certain, it is that the students will not remain quiet until Pitt aligns its investments with its mission to “contribute to social, intellectual, and economic development in the Commonwealth, the nation, and the world.”