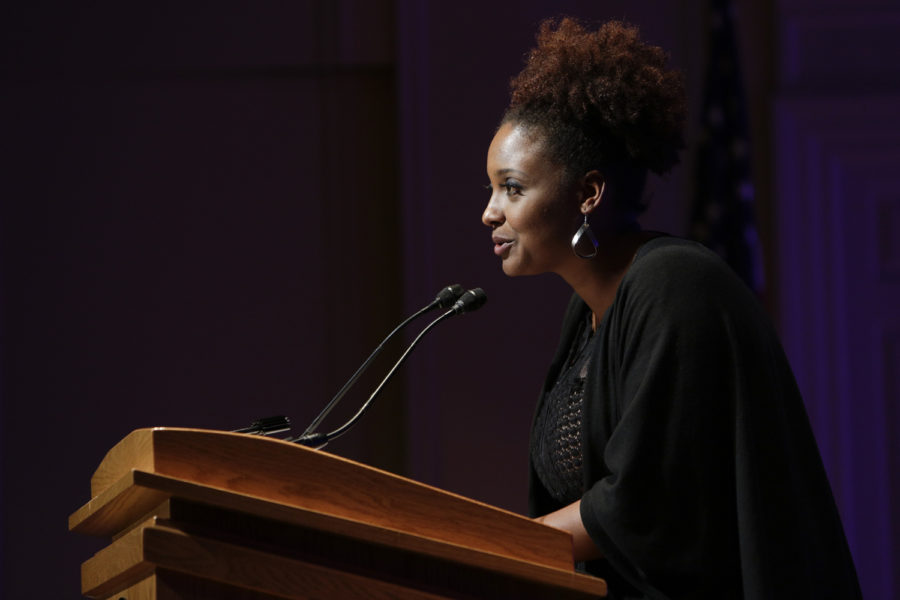 Photo by Shawn Miller via Library of Congress

By Hannah Schneider and Adaugoamaji Nwankpa

Tracy K. Smith is the Poet Laureate of the United States — the official poet of the nation. Her position tasks her with raising awareness and appreciation of writing and reading poetry. But in the process of getting to the position, she did a lot of questioning.

Smith was the latest speaker in the “Poets Aloud” series, hosted by The Center for African American Poetry in partnership with Pittsburgh Arts & Lectures and the Carnegie Library of Pittsburgh. Her appearance Thursday evening, hosted at the Carnegie Library Lecture Hall in Oakland, featured a reading of her poetry to an audience of more than 150 people. The event was moderated by Dawn Lundy Martin, a Pitt English professor and director of Center of African American Poetry and Poetics.

In the lecture hall, Smith read from many of her works — including her new book, “Wade in the Water.” The book explores difficult questions of race, silence, death and discomfort with religion.

“I think I spent part of every day trying to get my head around what the afterlife is,” Smith said. “I want to think about what we are here doing, and poetry has been a great way to do what for me what feels comfortable, or soul-searching kind of work.”

One of the main things Smith has written about in her recent poetry is learning about how history can teach society about the present and future. One of the poems she discussed, titled “I will tell you the truth about this, I will tell you all about it” used segments of letters from former slaves enlisted in the military and their loved ones during the Civil War era.

“Even in that awful history that we belong to as Americans, maybe there is something we can learn from what was done wrong, something that we can see and change,” Smith said. “There are poems in my recent work that are looking backward, and hoping that perhaps even voices from another time period might have something necessary to say that we might miraculously be able to hear.”

Handling grief from loss of loved ones was another theme throughout Smith’s readings at the event. Smith lost her mother in 1994 and her father in 2008. Their passings provoked Smith to think about the afterlife, religion and existence, which have inspired many of her poems.

But she said writing about the loss of her loved ones allowed her to avoid discussing other personal struggles involving her identity. These struggles inspired her 2015 memoir, “Ordinary Light,” in which she faced those struggles head-on.

“When I started out with the intention of writing a memoir, it was because I knew there were things that I had leapt away from in my poetry,” Smith said. “In my poems, I had written about my mother and my father and my family, I had leapt away from questions of race, questions of silence, questions of God and struggle to become comfortable with religion, and I wanted to hold myself in place to have to go to those difficult places. And prose was a vehicle for that.”

Smith’s poetry connected with audience members of all skill levels. One audience member, Cameron Barnett, is an award-winning poet and a teacher at Pitt’s Falk Laboratory School. He said while he appreciated the details in Smith’s poetry, he also enjoyed the simplicity.

“The ease with which her poetry comes across, sort of like the undertones, the depth of it, have a lot of room to play around in your mind. But the language is accessible. And also just her different work with forms, the ratios with letters, with other just free-verse poems, it was all … really enjoyable,” Barnett said.

But other audience members connected with Smith’s work on a more personal level. Kevin Mosley is an activist, retired Pennsylvania state trooper and author who was in attendance at the event. He said Smith’s identity as an American American woman added value to her poems. According to Mosley, her poems about African American troops during the Civil War era spoke to the feeling African Americans face in struggling to consider themselves as American after being rejected for many years.

“She brings a lot to the table that you’re never going to hear from a white poet because they’ve never had that lived experience,” Mosley said. “These are the things that she’s had to cope with, deal with, and she expresses in a way that not just African Americans can relate to but anyone who considers themselves American. She brings out the history in people who don’t consider have never been taught.”

For Pitt student Tim Appleton, Smith’s discussions about compassion were timely. He said he thinks her poetry is something the greater community should hear.

“She’s bringing the message that Pittsburgh could use right now,” Appleton said. “It’s just about recognizing everyone as their own individual. And I think at the end of the day … that’s something I think more people should try to get.”