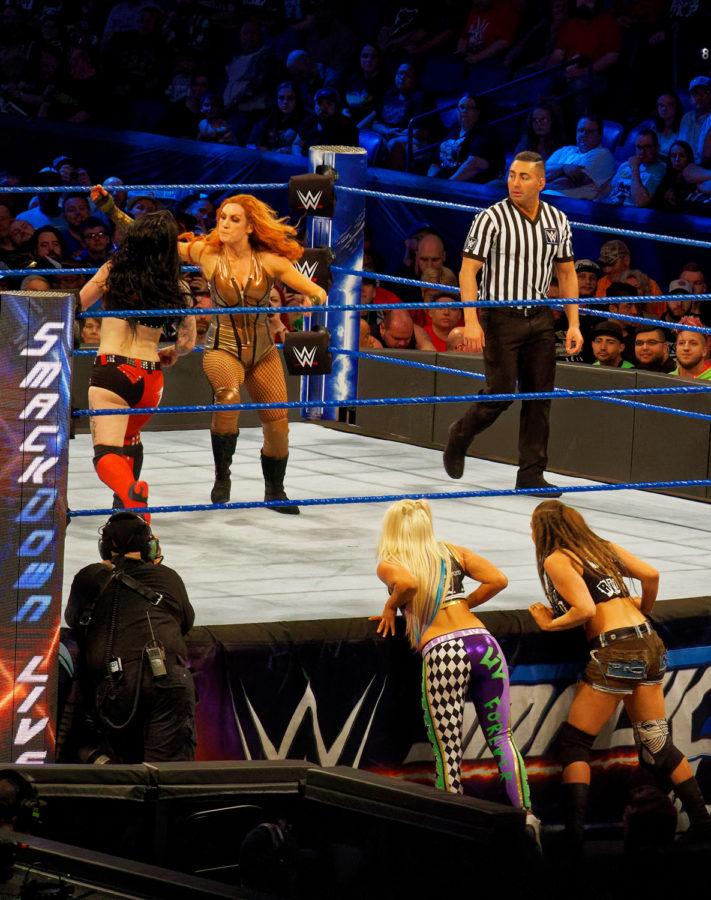 The boos directed toward Nia Jax at WWE’s “Survivor Series” pay-per-view Sunday were the most thunderous and tenacious I’ve ever heard and I’ve been watching professional wrestling since 2008.

On the Nov. 12 episode of Monday Night RAW, SmackDown Women’s Champion Becky Lynch led the SmackDown women’s locker room through an invasion and beatdown of the RAW women’s division. As the brands battled for supremacy, Jax straight-up punched Lynch in the nose with a stiff right hand, fracturing her face and concussing her.

Lynch’s new “The Man” persona didn’t show that the blow had any effect though, as she still stood triumphantly with her title at the end of the show. Bad news would come the next night, when WWE announced that due to the severity of the concussion, Lynch could not compete at Survivor Series.

Plagued with the decision of choosing who would replace her in her champion vs. champion battle at the PPV with RAW Women’s Champion Ronda Rousey, Lynch really was The (bigger) Man — selecting her former best friend and rival Charlotte Flair.

Lynch directed Flair to make Rousey bleed and to make her tap out.

While it’s unfortunate Lynch got pulled, WWE has taken concussion protocol very seriously lately, based on the reality that though the matches are scripted, what professional wrestlers do still carries a high level of potential damage and many superstars do sustain injuries while working. While mild and major injuries are just part of the biz, the same performer repeatedly doling them out should absolutely not be.

And Jax has injured no less than four other superstars since her debut on RAW in 2016. Among the injuries on her list are letting Charlotte fall right on her face after a moonsault from the top rope to the floor and injuring both Bayley’s and Alexa Bliss’ shoulders. She also concussed Zelina Vega during the battle royal at “Evolution,” which Jax went on to win.

Looking at Jax’s accomplishments in her short career, you’d think that her character work and performance in the ring could make up for her constant botching — she was voted Pro Wrestling Illustrated’s rookie of the year in 2016 and has held the RAW women’s championship. But her mic work is always uninspired with bland delivery and her moveset is basically limited to incapacitating her opponents with superior size.

With the women’s evolution unfolding in WWE, the addition of plus-size women should certainly be implemented into the company, but not so that their sheer size is their selling point. Having the 6-foot, 300-pound Jax bulldoze her much smaller opponents doesn’t mean she’s a good wrestler, it just means she’s big.

Those tactics don’t fly in the men’s division — yes, there are “monster” type male superstars, but they have powerful movesets that involve actually overpowering an opponent with strength, or in the rare case, quickness.

But Jax is just clunky in the ring and doesn’t make any of her moves look good at all. Now with her addition of a reputation as an unsafe worker, it would be best for every woman on WWE’s roster to send her back to the training center or let her go altogether.

Though the dream match between Lynch and Rousey was postponed, fans were still rewarded with Flair vs. Rousey — a match many predicted to be a featured match at Wrestlemania 35 in 2019. Charlotte has been one of WWE’s prized women for years now — with seven women’s championship reigns to date — so the clash with WWE’s newest golden girl was bound to be a showstopper.

And man, these ladies delivered.

The bout started scrappy and didn’t really seem to favor one competitor over the other, as both women got some offense in and the pair traded submission holds. Then the match became more methodical and both women had several counters ready for the other’s offensive moves. Nothing particularly special happened, but having two gifted athletes perform their craft with such a passion glued me to my screen.

Eventually, Rousey was able to lift Flair into a fireman’s carry and slam her onto the mat, looking to connect into her famous armbar submission. But Flair crawled under the ropes, making the referee break the hold, causing some frustration within Rousey.

I turned my head for one second and heard a violent crack. Oh my God. Flair just hit Rousey with a kendo stick. That means Rousey wins by disqualification.

But Flair didn’t stop there. She continued to beat Rousey down with the kendo stick, the steel ring stairs and a steel chair in what can only be described as an absolute assault. Even the announcers seemed shocked and commented that Flair should be arrested.

What just [email protected] may never be the same after this brutal assault from @MsCharlotteWWE. #SurvivorSeries pic.twitter.com/9VlQOaaIxr

Rousey slowly walked herself up the ramp by herself, title in hand, with a plethora of welts and cuts all over her body. She was absolutely battered and “The Baddest Woman on the Planet” let more than a few tears leak out. Flair lived up to Lynch’s expectations of making the champ bleed.

All Lynch has to say about the matter is, “Everyone writing love letters to each other on social media about #SurvivorSeries tonight. Well here’s my statement: I cannot wait to get out of doctor jail and rip all your faces off. Signed, The Man.”