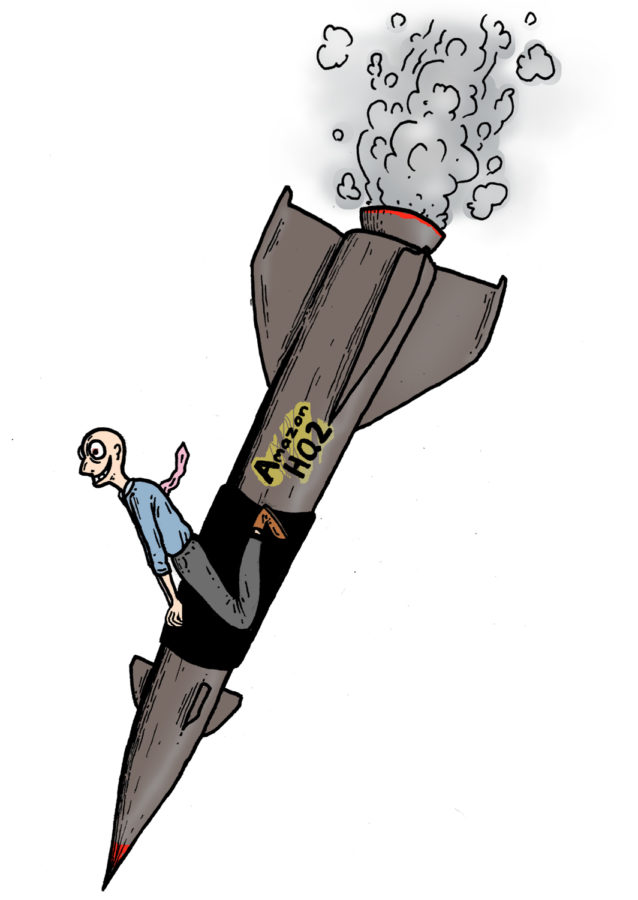 When Google moved next door to Aletha Sims, who lives in the Pittsburgh neighborhood East Liberty, she noticed an immediate change in rent prices — they were going up.

“Who’s that [rent increase] affordable for? Definitely not the people who lived here. And not too many people that I know of,” Sims said to Blavity.com.

Pittsburgh is no stranger to big tech companies looking for an environment of innovation. Google came to East Liberty in 2010, and earlier this year Pittsburgh was on the shortlist for Amazon’s search for a second headquarters, or HQ2. But Amazon announced on Nov. 13 that it chose northern Virginia and New York City as HQ2’s dual final destinations.

While it may seem like a missed opportunity for Pittsburgh, past dealings with large tech companies such as Google and Uber have raised prices and pushed people out of their homes and lives in the City. The deals offered to Amazon in both New York and Virginia could spell disaster to some of the residents in Long Island City and Arlington — and in some cases it already has.

It’s not just affordable housing that Amazon is disrupting in these cities — it’s the way of life. The New York City subway system is infamous for its constant state of disrepair, and in 2016 Washington shut down its entire metro system for nearly 30 hours for maintenance. Furthermore, New York and Washington rank second and sixth, respectively, on SmarterTravel’s list of most congested cities for road traffic. Both cities are already infamous for bad traffic and public transportation issues, and the incoming traffic from Amazon staffers and their families has the potential to exacerbate these issues even further.

In Virginia, Arlington has offered a lot to the corporate giant, ranging from the normal to the ridiculous. Arlington offers $22,000 to Amazon for each new job Amazon brings, up to a total of $550 million over 12 years — but also ensures the city will help Amazon seek approval for a helipad on its new campus, with no explicit reason given for what the helipad would be for.

Even though Amazon didn’t choose Pittsburgh as one of the sites of HQ2, there are still tech companies bringing problems to the city. When Uber came to Pittsburgh to begin testing its self-driving car program in September 2016, Mayor Bill Peduto welcomed the ridesharing company.

“You can either put up red tape or roll out the red carpet. If you want to be a 21st-century laboratory for technology, you put out the carpet,” Peduto said at a press conference in Sept. 2016.

More than two years later, the self-driving car tests have not gone as expected. Uber made no agreement with the city promising to deliver any incentives, but lauded the jobs it brought to the area. In Tempe, Arizona — the other test site for self-driving Ubers — a pedestrian was killed while walking her bike across a street in March of this year. Four months later, Uber laid off all of its self-driving vehicle operators.

Other companies have brought problems to the City too. Since Google moved from Carnegie Mellon University’s campus to East Liberty in 2010, more companies have followed. Language-learning app Duolingo, which was founded by a CMU professor, is now headquartered about a mile from Google on Penn Avenue.

The influx of tech companies and their employees has forced many residents out of their homes. Between 2007 and 2015, East Liberty lost 940 low income residents due in part to multi-family apartment complexes becoming single family homes, and steeply rising rents in the neighborhood as tech employees move in. In some cases, it is more affordable to buy a home instead of renting — which forces out low-income residents who generally have lower credit scores and a harder time securing a mortgage.

Residents have been forced to seek housing outside of East Liberty, which puts them far from the neighborhood they called home.

“We finally moved out to Millvale,” one East Liberty resident, Aaron Vire, said in an interview with the Poverty & Race Research Action Council. “I had to buy a car to commute back here to my job, and then I had to take another job to pay for the car. I work 48 hours at one job, 32 at the other. I get very little sleep. And I miss my neighborhood.”

Luckily, the City of Pittsburgh is not sitting idly by, and is making some efforts to combat rising rents in East Liberty. The city announced plans in August for three new affordable housing developments, partially financed by the recently formed Affordable Housing Trust Fund — a fund of $10 million to provide funding for new affordable housing projects, as well as help low-income home-buyers with home purchases and rehab costs.

The developments would help people who lost their homes after Penn Plaza, an affordable housing project in East Liberty, was demolished in 2017. Originally, the site was meant to become a Whole Foods Market, but the company now owned by Amazon pulled out after community backlash.

The project faced additional controversy when tenants of the former apartment buildings alleged that developer Pennley Park began demolition when residents still lived in the building.

The announcement of the development projects, which are intended to replace the housing lost when Penn Plaza was demolished, comes with lots of hope. Local religious officials have made efforts to ensure that community members are included and considered when it comes to the projects. City Councilman and Reverend Ricky Burgess announced that two of the three developments would be completed by February of 2020. Burgess also guaranteed current residents of the building that they would be given the option to return at affordable rates.

Amazon’s HQ2 announcement has left New York and Virginia alike at the mercy of one of the largest companies in the world, which ranked 8th on Fortune’s 2018 500 list and reached a record market value of $1 billion in September 2018. While some were championing for Pittsburgh to make its way from a top-20 contender to one of the chosen cities, past dealings with companies like Uber and Google show that large tech companies hurt Pittsburghers.

The city is still trying to fix the affordable housing crisis left in East Liberty since Google moved in — and Pittsburgh dodged a bullet when Amazon chose elsewhere.