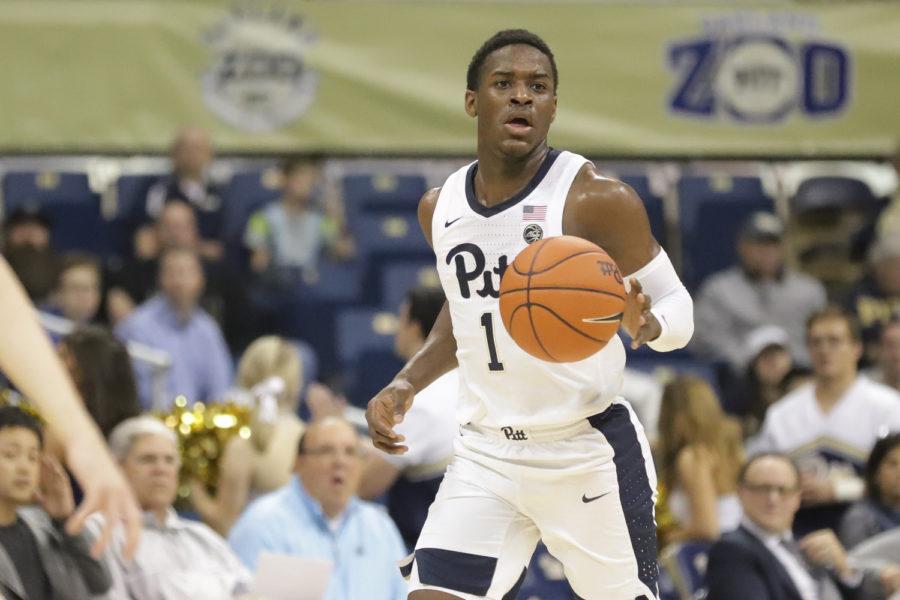 First-year guard Xavier Johnson, pictured here against WVU, was held to single-digit points for the second straight game versus Louisville.

It’s an age-old sports adage that there’s no such thing as a moral victory. But if moral victories did exist, they’d look a lot like Pitt’s 69-68 loss to No. 14 Iowa on the road Tuesday evening.

Playing against the Hawkeyes (6-0) as part of the ACC-Big Ten Challenge, the upstart Panthers (6-1) led by six at halftime and took their ranked opponent right down to the wire in a back-and-forth affair. But ultimately, the team went cold down the stretch and fell by one point.

Despite the loss, it was encouraging for Pitt fans to see the team’s competitive play just one year removed from one of the most abysmal seasons in program history. Pitt’s closest result against a ranked team in 2017 was a nine-point loss to No. 18 West Virginia.

First-year point guard Xavier Johnson continued his outstanding play to start the season, leading the Panthers with 18 points and six assists, making him the first first-year in program history to score in double figures through his first seven games.

After junior guard Jordan Bohannon opened up the scoring with a three on Iowa’s opening possession, Pitt didn’t get on the board until the 18:09 mark, when first-year guard Au’Diese Toney converted a driving layup to make it a 3-2 game. Toney totaled four points and three rebounds for the game, while Bohannon collected 12 points to go along with a game-high six steals.

After trading baskets for the majority of the opening stretch, the Panthers went on a 17-11 run to close out the first half, giving themselves a 46-40 lead. Johnson led the way for the Panthers, scoring 12 points in the half. As a team, Pitt shot a scorching but unsustainable 61 percent in the first half, compared to 42 percent for Iowa.

That six-point advantage would quickly evaporate after halftime, as Iowa rattled off 7-0 run to retake the lead. However, the Panthers countered with a 12-5 run of their own, regaining a six-point advantage as they led 56-50 with 13:01 on the clock.

With 6:14 remaining in the game, redshirt senior forward Nicholas Baer hit a 3-pointer to give Iowa a 64-62 lead. The Panthers had to play catch-up from that point on, ultimately falling short in the end. Baer finished the game with 16 points and five rebounds on four-for-seven shooting off the bench.

Despite shooting just 29 percent in the second half, Pitt had multiple chances to tie it up as the clock ticked down. With 3:59 remaining, grad student Sidy N’Dir made a free throw to pull the Panthers within two. Baer hit a free throw with 1:29 on the clock two minutes later to pad Iowa’s lead to three, but junior forward Kene Chukwuka followed with a layup to get Pitt within one. Chukwuka hauled in three rebounds to go along with nine points while N’Dir contributed nine points, five rebounds and three assists off the bench.

As both teams traded a couple free throws inside the final minute, Pitt received a devastating blow when a foul was called on Johnson with 10 seconds left. The fatal foul was his fifth of the game, meaning he had to head to the bench.

Junior forward Tyler Cook missed the ensuing two free throws for the Hawkeyes, giving Pitt the opportunity to win the game with one bucket. First-year guard Trey McGowens probed the paint and managed to get off a decent shot — but it airballed, and N’Dir grabbed the rebound and quickly hoisted a baseline jumper at the buzzer which airballed as well, giving Iowa the 69-68 win.

For the Hawkeyes, first-year guard Joe Wieskamp led the way, dropping 18 points to go with 11 rebounds while shooting four-for-eight from beyond the arc.

After shooting over 60 percent in the first half, the Panthers struggled in the second half, scoring just 22 points to bring their team percentage all the way down to 47.3 for the game. Meanwhile, Iowa shot just 36.5 percent for the game, but made up for it at the line, knocking down 19 of 28 free throws. Pitt didn’t have the same luxury, going to the free throw line for just 13 attempts and converting eight of them.

The Panthers will look to get back in the win column when they take on Duquesne in another out-of-conference matchup 7 p.m. this Friday at PPG Paints Arena in the annual City Game.