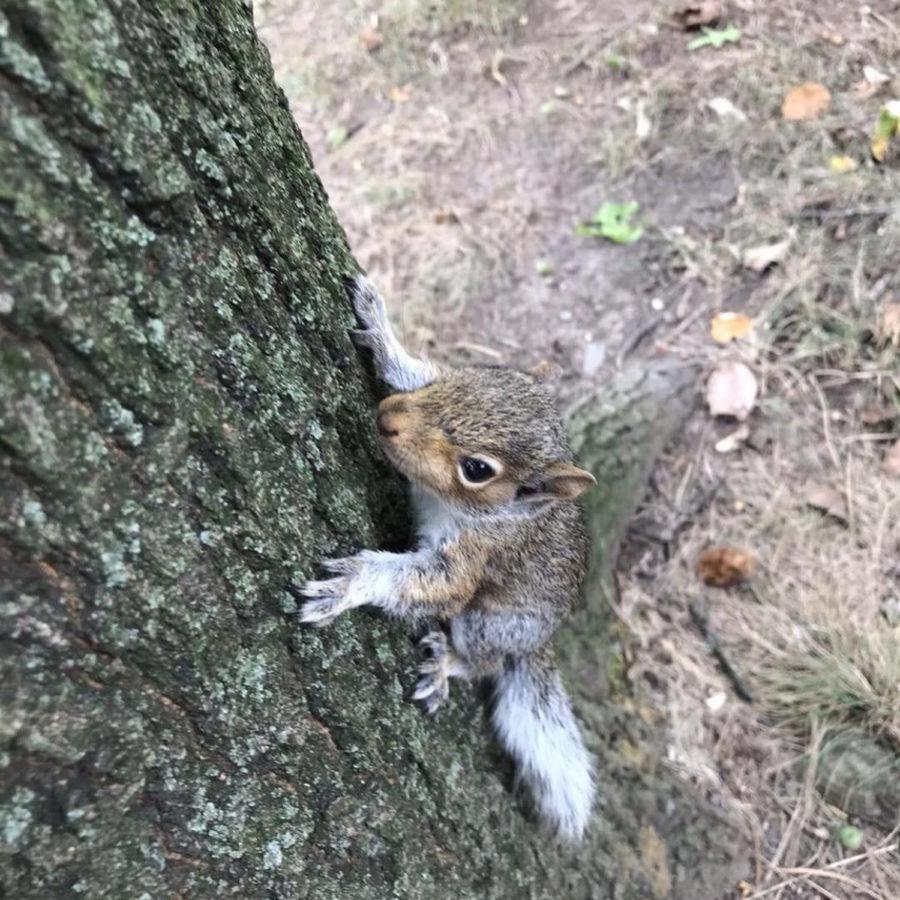 Believe it or not, the many squirrels seen bouncing around the Cathedral Lawn and scavenging in the William Pitt Union’s trash cans are Instagram stars in the making.

Pitt’s campus squirrels have gained a significant following on the Squirrels of Pitt Instagram page over the past four years, thanks to their fluffy tails, beady eyes and shenanigans around Oakland.

The account surpassed 1,000 followers this month and has accumulated more than 180 posts of pictures and videos. On average, a single post receives anywhere between 100 to 250 likes. A video showing a squirrel eating food from a student’s hand posted in November was viewed more than 400 times.

Vaishnavi Guddeti, a sophomore majoring in neuroscience, currently runs the account after the original owner, fellow squirrel enthusiast and 2018 Pitt alum Anastasia Bodea Crisan, passed it on to her when she graduated. She posts diligently and answers direct messages from fans on a daily basis, checking the page at least three times a day.

The page recently experienced a spike in popularity due to Guddeti’s frequent postings, so she fluctuates her posts between pictures she has taken herself and ones that students have sent her. Every day she receives between three to five direct messages on Instagram of followers supplying her with fresh squirrel content and relaying messages of positive support.

“I like the idea that we are all in this, trying to find squirrels together. It’s like a way to bond with people,” she said. “I never meet them in person, but it is kind of social. You’re sharing stuff with people you don’t know, but you’re both interested in it.”

It may not be a surprise for some that there is an Instagram account dedicated to the local tree rodents. Squirrels have reached a certain kind of celebrity across the internet — squirrel-ebrity, if you will.

On Twitter, The Common Squirrel, whose tweets delve into politics — “Hey, I’m tired of the election too. Steve King is a white supremacist serving in Congress,” reads one — and border on the bizarre — featuring squirrel-isms such as “run run run,” “blink blink,” “stare” or “hop” — has accumulated more than 92,000 followers. “Squirrel Lovers,” a Facebook page that regularly shares squirrel images and videos, has 91,956 likes and 91,566 followers.

And Instagram has numerous squirrel accounts for various college campuses and cities, including Squirrels of Indiana University, UT Austin, State College, Philadelphia and Milwaukee, to name a few.

Guddeti said she believes the account plays into a larger joke among young people. By following the page, she said, you are contributing to the meme — a funny or ridiculous image, video or piece of text that is copied and disseminated by internet users.

“It is a continuous joke that no one is ever actively laughing at, but still exists and it’s kind of funny when you think of it,” she said. “I don’t think my captions are so funny, or I as an individual am so funny. Everyone is just in on it.”

Zachary Hartman, an undecided first-year, chose to follow Squirrels of Pitt after seeing that a friend liked one of its pictures on Instagram’s “Explore” tab. He noticed many of the posts give credit to whomever submitted the picture or video, and sent in a photo so he could get his “15 minutes of fame.”

“I’ve been featured twice now, so I’m pretty much a celebrity,” he said. “Don’t be surprised when I start acting differently.”

Vanity is not his only motivation, however. Hartman said seeing them on his social media feed offers some much-needed humor to his stressful school days.

“It’s just a nice little thing to see in my Instagram feed besides the usual trash,” he said. “And it gives you some micro-stress-relief.”

That’s exactly why, as a first-year student, Crisan started the page in 2015. When she arrived on campus, it seemed to her that the squirrels she saw were generally more friendly and uplifting than others she encountered elsewhere, and she was immediately fascinated by their bold attitude.

“I’d be on campus having the worst day and then I’d just watch a squirrel for like, two minutes,” she said, adding that she’d often take photos and store them on her phone. “It’s something simple, pure.”

Crisan first publicly spoke about her love for taking pictures of squirrels during icebreakers at a meeting for Pitt’s sailing club. Nobody shared her interest. This motivated her to begin a page dedicated to her photos of Pitt’s tree-dwelling rodents so she could find others who shared her passion.

The first image she posted, a parody of the internationally known Humans of New York Facebook page, is a simple photograph of a gray squirrel crouching on all fours by a tree, its dark eyes staring directly into the camera.

The caption reads, “Although there are squirrels all around me every day, I still somehow feel lonely. I suppose my greatest insecurity would be that I still don’t really have a squad or place where I belong.”

The post, though reflective of Crisan’s own social insecurities as a first-year, was the start of a short-lived photo series with similarly humorous captions. Her posts her senior year were irregular, but the squirrels still brought her joy. Even as graduation became a looming reality for Crisan, she found solace in the page and the community it started to create.

“I think the thing that makes Squirrels of Pitt so great is that it’s a community kind of page. Anybody can end up submitting pictures, and that’s how it became so big,” she said. “[The squirrels] are a big constant on campus. So many things change all the time. Administrators change, buildings change, classes change, friends change, we change. But those squirrels are always there.”