Column: Sweet 16 on the horizon for Pitt volleyball 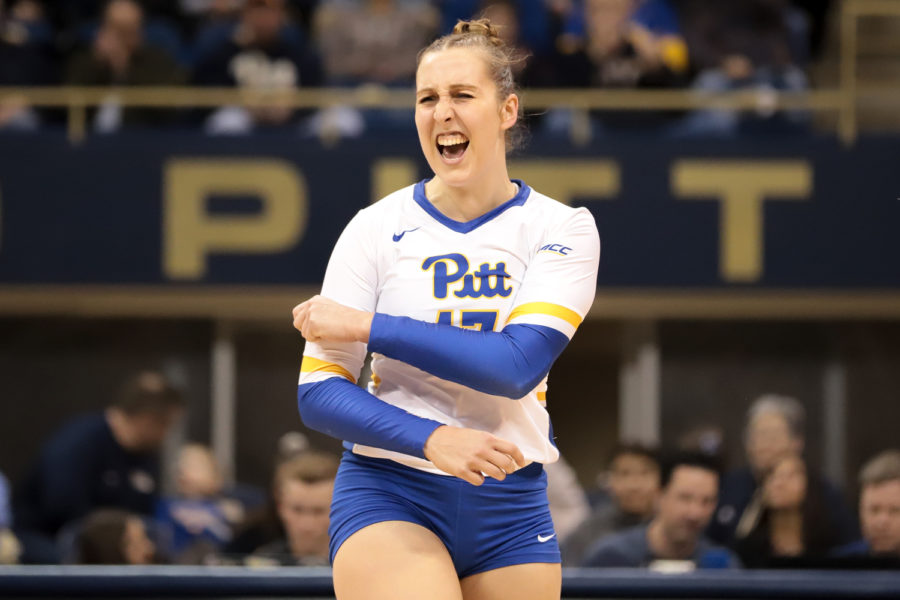 For the first time in program history, the Pitt women’s volleyball team will host the first two rounds of the NCAA championship tournament. This will be the team’s third consecutive appearance in the tournament and 14th appearance in team history — and fans can expect the Panthers to go further in this tournament than ever before.

Pitt has never won an NCAA Volleyball championship before. In fact, it has never surpassed the second round of action. The Panthers’ past two runs at the championship, in 2016 and 2017, were cut short at the hands of Penn State, both times in the second round. But Pitt was the away team in both those tournaments, losing at Penn State 3-1 each time. Now, the Panthers don’t have to worry about traveling or facing the Nittany Lions early on.

Last season, in the first two rounds of play, the Panthers traveled to University Park for the Penn State headliner. Pitt beat VCU in round one, winning the match 3-1. The trouble came in round two, when Pitt had to face in-state rival and then-No.1 seed, Penn State. Penn State blew out Pitt 3-1 in the match. The Panthers’ lone bright spot came in a second-set win by just two points — 25-23. The Nittany Lions went on to place as a semifinalist in the tournament, falling just short of the championship.

This time around, Pitt’s headline of the tournament will begin at 4 p.m. Friday with Navy and Michigan squaring off. The crowd-favorite Panthers will hit the court at 7 p.m. to face Iona College — champions of the MAAC conference. The winners of each match will face each other in round two on Saturday, with the winner of that game moving on to likely play No. 5 Texas in the Sweet Sixteen.

The Panthers finished the season ranked seventh, according to the NCAA Women’s Volleyball Ratings Power Index, which takes into account record and strength of schedule. The Gaels finished the season in No. 155. Pitt will be the toughest team that Iona has played all season.

An elite high school team is the equivalent to some of the squads in the MAAC conference — including Iona. The Gaels’ No. 155 ranking is the highest in their conference, with some other MAAC teams ranked almost twice as far down the list. If the current Pitt volleyball team was in the MAAC, it easily could’ve swept in all in conference matches. The final set scores would have been mind-blowingly unfair.

Iona is the only school in the MAAC to make the tournament this season, showing that the conference does not have a deep talent pool. Pitt, on the other hand, is one of five ACC teams participating in the tournament — the others being Duke, Florida State, Syracuse and Louisville.

The Gaels’ toughest opponent this season was Stony Brook, which finished in the rankings at No. 104. Iona lost that match in a 3-0 sweep, losing the last set 25-8. Pitt, meanwhile, went a perfect 3-0 against top-25 opponents this season.

The Panthers also enjoy a noticeable home-court advantage, having won all 19 home games this season, thanks in part to the record-breaking crowd appearances at the Fitzgerald Field House this season.

Pitt has a comfortable edge over Iona that surpasses home court advantage. The Panthers aced their season with a 29-1 record. Iona finished with a credible 20-7 record, albeit against inferior competition. This will be the Gaels’ second-ever appearance in the tournament — their first was in 2004, when they lost to Nebraska in a first-round sweep.

Now, the team has earned a spot in the tournament for three seasons in a row with roughly the same elite team — minus a few seniors along the way. The Panthers have the high-caliber championship experience heading into this match.

Pitt also had one of its best seasons to date. Of the Panthers’ 29 wins, 16 of those were sweeps of their opponent. They only had two wins that were even decided in a fifth set.

Pitt’s second-round blues should also come to an end this championship run. Michigan (22-9) would be the harder team to beat over Navy (23-8) in round two — the Wolverines have an RPI ranking of 21 compared to 90 for Navy — but even so, Pitt should be favored to eliminate them.

That being said, there’s no reason why the Panthers should lose their initial match against Iona. They are the far better team going into the tournament and have the home advantage. With fans like the ones Pitt has, the Pete should be rocking this weekend.