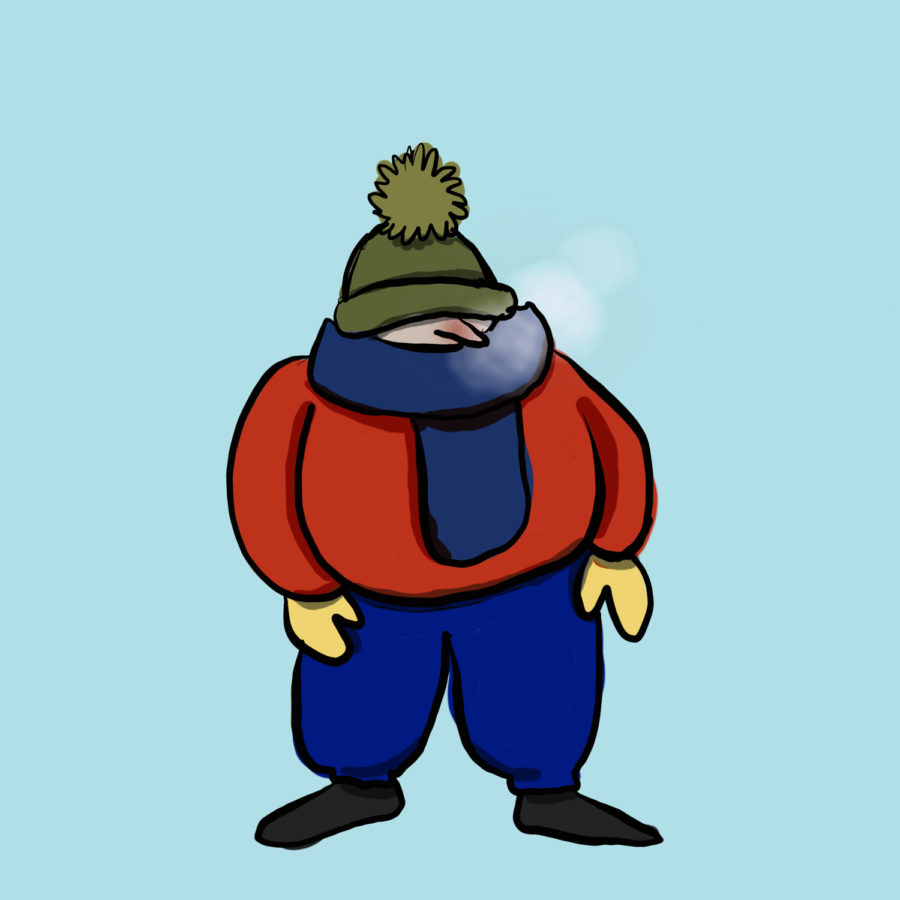 I’ve walked past a smashed-up pumpkin loitering on the sidewalk in front of my house several times a day in recent weeks. The pumpkin, smelling rotten and looking grotesque, and mostly not like a pumpkin, reminds me of two things looming on the horizon, both of which I hate to think about — I am surrounded by other people’s garbage, and autumn is over.

Now both of these should be a given, but I’m more willing to accept other people’s trash on my property than the seasons changing from fall to winter, despite experiencing this phenomenon no fewer than 20 times in my life. Frankly, winter is the Oakland garbage pile of seasons.

First, I wake up and everything is freezing. Though this may be an improvement from hot summer and early fall days, when I’d wake up slicked with my own sweat as the box-fan in my window hummed and the sun growled at me with its light, waking up in the winter is an adjacent evil.

It’s about 6 a.m. and I find myself uninterested in leaving the warmth I’ve accumulated through the night, so I have to factor another 20 or so minutes into my day just to psych myself up to get out of bed. This typically involves thinking about the song “Get’cha Head in the Game” from the Disney Channel original movie “High School Musical” and kick-starting my anxiety by reminding myself that I’ll fail at everything if I don’t get out of bed. These tactics generally have an 8-percent success rate.

During fall, I could have used those 20 minutes to stare aimlessly at a book I have to read for class or to watch the curtains sway in the breeze, like a Victorian woman sitting in her drawing room, waiting for her betrothed to return from the market, hoping he does not fraternize with the commoners. But I do not have a betrothed. I am one of the commoners. And I only have a bed warmed by myself.

When I’m finally up and moving I go downstairs, passing by the thermostat. “I could have had heat,” I whisper softly in the darkness, gingerly caressing the knob. “We could have had something, you and I.”

I spent too much of my heat money on a couple of nice slabs of brie cheese the last time I was at Trader Joe’s. If only I could do it over again, I think I would have the mental fortitude to choose heat over cheese. Instead, I grab the blanket from the sofa and wrap it around myself, the soft fabric trailing behind me like the train of a villainous robe — also a tripping hazard for all those around me, yet another vile symptom of winter.

After wandering around my kitchen, sweeping the dusty floor with my blanket cape, I decide I should really kick my day into high gear and head to the gym. Winter requires endorphins as power.

So I abandon the blanket shroud and gather my things. As I turn to lock my door, I look off into the distance, off to the smashed pumpkin, and remember the good times — back when I didn’t need to wear bulky clothes and three layers just to walk ten minutes, a time when I didn’t need to wear hulking snow boots. That time now looks at me — a moron holding their sneakers loose in their arms — in its rear-view mirror.

I begin to trek up the hill, finding that despite all the work I’m putting in, I’m not making much progress. The hill is both steep and festooned in patches of thin ice. Channeling every game of “the floor is lava” I ever played, and wishing that sentiment rang true, I attempt to avoid the ice patches.

But there are too many and it’s still dark outside, so I end up sliding back while climbing up the two blocks of demonic hill in the pursuit of those sweet, sweet endorphins. The entire endeavor has me feeling like Sisyphus and the rock at the same time.

Coming back down the hill is no easier — actually, it’s inconceivably worse. Somehow, it’s still dark outside — at seven in the morning.

Once I’m back inside my house, I feel suspiciously warm. Checking the thermostat again, I see that someone woke up just to turn the thermostat to eighty, and like everyone’s favorite passive aggressive dad, I put on my “Do you think I’m made of money?” face and turn it all the way down.

And those are just the problems I experience within the first hour of being awake during the winter.

After that first hour, when it eventually becomes light outside, I can finally take in my surroundings. I see no winter wonderland around me. Autumn gave me barren trees surrounded by decadently crunchy leaves under my feet and the death of all those annoying summer bugs. Winter only gave me 33-degree rain, smokers huddled under my awning to avoid getting wet, and brown snow slipping into the gutter at the bottom of the street. I wish above all else to follow that snow into the gutter.

Throughout the rest of the day, my skin smacks its parched lips and cries out in collective suffering. My hands, scalp and lips are all flaky. I feel like myself, but stale, left on the countertop without a twist-tie to keep me fresh. All my dark clothes are covered in flakes of my former self, which is kind of punk rock in an existential way, but mostly disgusting. I find myself chained to medicated lip balm and feeling greasy the minute I attempt to fix the flaking with lotion or hair oils. I live in two alternate realities, in the valley between dry and greasy, longing for the days when I could simply exist as myself.

My world comes to a gradual close again as darkness falls around 5 p.m. and I’m left with only my seasonally depressed thoughts to comfort me.

I gave up trying to enjoy winter long ago. I no longer have the youthful optimism of snow days and snowball fights to keep my bitter soul warm. Not even the reintroduction of peppermint beverages and the prospect of the holidays can save winter from itself. It’s a terrible season void of light, heat and joy. Oh, how I long for the first unfrosted morning.

Only then will I feel whole again.