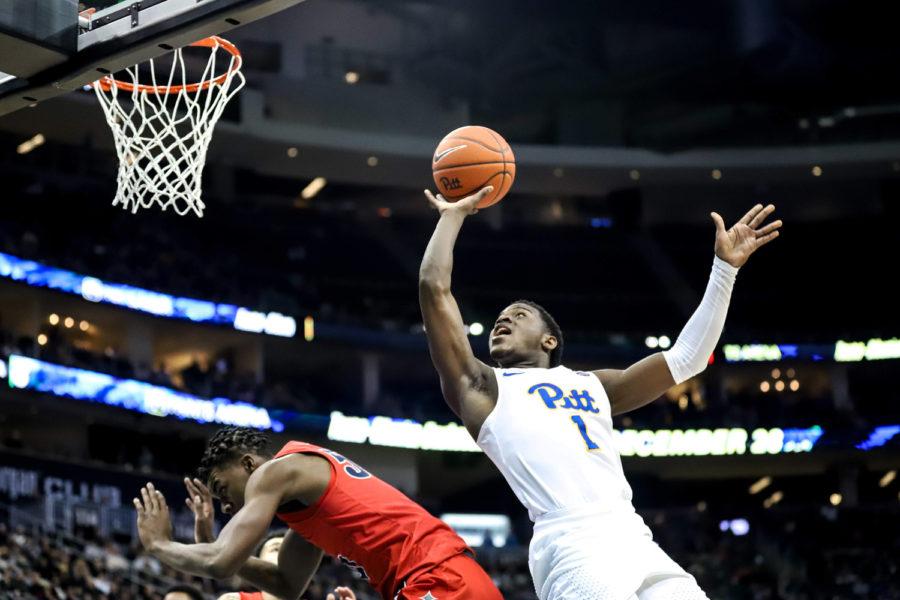 For the second straight year and 19th time in the past 21 meetings, the Pitt men’s basketball took down its crosstown rival Duquesne, 74-53, in the annual City Game Friday night at PPG Paints Arena.

With the win, the Panthers rebounded from a close loss to No. 14 Iowa in their previous game.

“I’m really proud of our guys for this win,” head coach Jeff Capel said. “I was very worried about this game, coming off such an emotional, gut-punching loss on Tuesday, getting back so late in the morning.”

Despite not making a 3-pointer until the game’s final minutes, the Panthers enjoyed a massive advantage at the free-throw line, getting to the line 27 times while the Dukes did so just 13 times. Pitt also played smothering defense, forcing 22 turnovers and holding its opponent to just 33 percent shooting on the game.

Although the game was close through the first half, Pitt finally started to take advantage of Duquesne’s mistakes in the second half, scoring 22 points off turnovers while the Dukes scored just three.

“It’s a toughness game,” Dambrot said. “And I think they kind of out-toughed us a bit.”

Although the two teams have now met 87 times, with Pitt leading the all-time series 55-32, this was the first City rivalry game for Pitt with Capel at the helm. Although it’s not quite Duke-North Carolina — a rivalry Capel experienced during his many years as an assistant for Coach K — Capel said the 12,246 fans brought a unique energy to the matchup.

“It was awesome. I thought the crowd was terrific,” he said. “You could feel the energy in the building.”

Despite entering the game as three-and-a-half point favorites, Pitt did not look like the superior team early on. Duquesne won the tip and struck first on a 3-pointer from sophomore guard Eric Williams Jr, then drew a charging foul on Pitt first-year guard Xavier Johnson. The Dukes would use that momentum to take an 8-0 lead in the first two minutes.

Junior guard Malik Ellison finally stopped the bleeding with an authoritative putback dunk to put Pitt on the board. Ellison was the Panthers’ lone bright spot at that point, scoring five of the team’s first seven points. Duquesne, on the other hand, drained all three of their first 3-point attempts en route to a 13-6 advantage.

Pitt slowly crept its way back into the game and finally took its first lead with 9:26 left in the half on a contested drive to the hoop from none other than Ellison, putting the Panthers up 16-15. They would clamp down defensively over the next five minutes, holding Duquesne to just two points over that span.

The Panthers noticeably struggled to initiate the fast break throughout the first half, but showed glimpses of high-energy basketball. With 7:54 left in the half, Johnson pushed the ball up court and forced a two-on-one scenario, ultimately dumping the ball off to first-year forward Au’Diese Toney, who craftily spun past the lone defender for a layup to give Pitt a 20-17 lead.

After entering the game as the first Pitt freshman to ever score double digits in his first seven games, Johnson also struggled noticeably in the first half. He missed all three of his field goals, scoring only two points from the free throw line. His frustrations boiled over when he didn’t get a foul call on a take to the basket, giving the ref an earful. The ref, in turn, granted him a technical foul — Johnson’s third foul overall — which demoted him to the bench until halftime.

Despite missing all five of their first-half 3-point attempts, the Panthers maintained their lead and went into halftime up 32-29.

It was an ugly first half for both teams, with Pitt scoring 10 of its 29 points from the free-throw line and Duquesne shooting a pitiful 32 percent from the field. The Dukes also turned it over 11 times.

The second half was more of the same, with Pitt not making a field goal for the first four minutes of action. However, the Panthers actually extended their lead by continuing to do damage from the charity stripe, making six of their first seven free throws to go up 38-31. First-year guard Trey McGowens was particularly efficient, getting to the line and making all five of his free throws.

Little by little, Johnson began to play his way out of his funk. The explosive guard scored back-to-back buckets, first a driving layup then a deep two-pointer to give the Panthers a 45-36 lead — their largest of the game.

Five minutes later, graduate transfer Sidy N’Dir gave Pitt its first double-digit lead, 56-45, on a strong take to the basket. Then with 4:37 remaining, N’Dir made the Panthers’ first 3-pointer of the game to put Pitt up decisively, 61-45. Up until that shot, the Panthers were 0-11 from beyond the arc.

Leading comfortably with the clock running down, senior forward Jared Wilson-Frame drained a fadeaway 3-pointer at the shot-clock buzzer, just for good measure. Duquesne then turned it over on the other end, allowing Pitt to run the clock out and secure a 74-53 win.

McGowens, despite shooting just two of seven from the field, finished as Pitt’s leading point-scorer on the night with 14, thanks to knocking down a game-high 10 of 12 free throws. Johnson just barely managed to keep his double-digit scoring streak alive, finishing with 10 points and a team-leading five assists. Ellison contributed 13 points of his own, while Wilson-Frame scored 12 and made two of the team’s three 3-pointers.

Pitt outperformed its opponent on the boards too, corralling 42 rebounds to Duquesne’s 33. Wilson-Frame, like Dambrot, attributed this to sheer superior willpower.

“That’s just toughness,” Wilson-Frame said. “That’s what we take pride in, is toughness.”

The Panthers will head back to their home-campus Petersen Events Center for their next game, a Monday night matchup with Niagara.