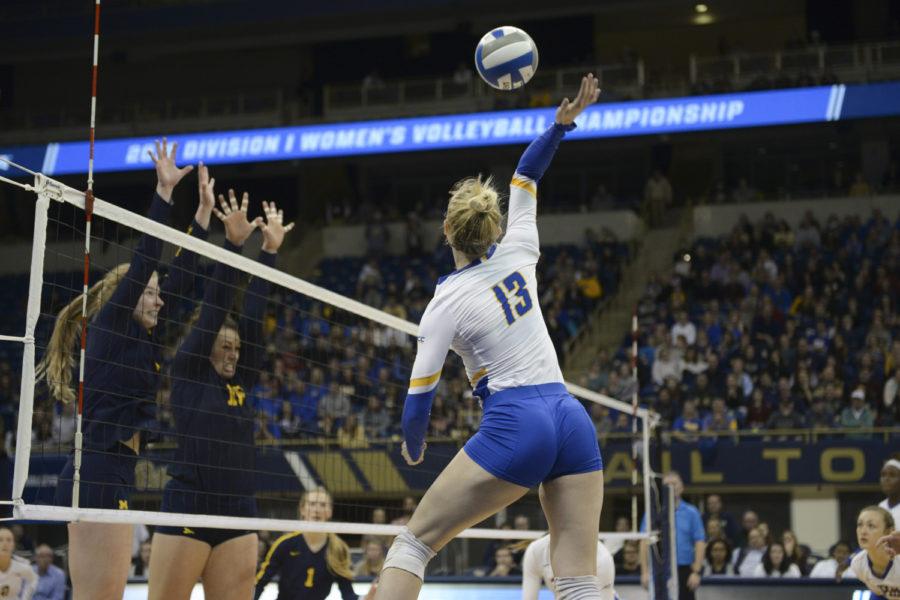 Panthers’ volleyball ended the season with a 30-2 record — succumbing to Michigan in the second round of the NCAA Tournament at the Petersen Events Center Saturday night.

After losing in the second round of the NCAA tournament the past two years, Pitt volleyball thought 2018 was its year — but Michigan ended the Panthers’ dreams of dancing into the Sweet 16 on Saturday night.

“I told the team how proud I was and what a great season it was,” head coach Dan Fisher said after Pitt’s loss to Michigan. “A 30-win season is pretty special, but I know right now it just stings a lot.”

For the first time in program history, Pitt hosted the first and second rounds at home at the Petersen Events Center. More importantly, they weren’t facing Penn State.

The Panthers had traveled to State College in 2016 and 2017, losing to Penn State in the second round both years.

“This is an opportunity we may never get again so we want to take advantage of that,” junior Layne Van Buskirk said after the game Friday night. “Not being at Penn State is also awesome.”

Pitt already made history this season with the most wins since 1990 and the best record in program history, finishing the season 30-2 with its only loss before Michigan on Saturday night coming against conference rival Duke. The Panthers also won their second consecutive ACC Championship.

In its 3-0 sweep against Iona on Friday night Pitt had 46 kills and a .306 hitting percentage. The Panthers were able to hold Iona to 34 kills and a .098 hitting percentage while taking advantage of 23 Iona attacking errors compared to its 16. It looked like the Panthers were on pace to achieve their goal and become the first Pitt team to make it to the Sweet 16 round of the NCAA Tournament.

“It was good to get the first win off our chest because we haven’t played since last Wednesday,” Fisher said. “I think there was a lot of anticipation, but I’m proud of the girls.”

After a shaky first set where the Panthers were behind a majority of the time, they battled back to win 26-24. Pitt regained its composure to win the second and third sets 25-18 and 25-15, respectively.

Junior Nika Markovic led both teams with 16 kills and finished the day with a .423 hitting percentage. She also reordered her 1,000 career kill during the second set.

“Before the game I wasn’t even thinking of it,” Markovic said. “And then during the game coach mentioned it and I was like, ‘Whatever.’ But now … I’m just really thrilled and grateful for being here.”

Despite its win, Pitt suffered a huge loss when sophomore outside hitter Kayla Lund was carried off the court with a right ankle injury during the third set.

Lund led the Panthers on the season in kills with 387 and aces with 36. She also contributed nine kills to Pitt’s win versus Iona.

Michigan defeated Navy 3-0 earlier Friday night to advance and face Pitt in the second round.

The Wolverines were ranked No. 18 in the AVCA polls Nov. 26 rankings, making them Pitt’s first ranked opponent since facing No. 21 Louisville on Oct. 21.

Pitt seemed to be the favorite on paper, having a higher AVCA ranking (11) and seeding in the NCAA Tournament – the Panthers were the 12 seed while Michigan was unseeded.

That seemed to be true when Pitt won the first set, 25-19. But the Wolverines used the next two sets to prove why they were there, winning 25-22 and 25-27, respectively.

“I thought it was a great match,” Michigan head coach Mark Rosen said. “I’m really proud of how our team fought and made adjustments throughout the match … I really liked how our team competed, especially in the fifth set.”

Redshirt sophomore Zoi Faki was filling in Lund. Before last weekend, Faki had only played in 29 sets. She was second for Pitt in kills against Michigan with 12, but was also charged with five attack errors and three serve receive errors.

“Zoi had a really good game,” Fisher said. “We had been playing one way for pretty much the whole year, so we were in the comfort of playing in the same system. I think [losing Lund] matters, but I don’t know how much.”

The Panthers were feeling the effects of missing Lund, having to change into 6-2 rotation going into the fourth set to counter Michigan’s attack. Pitt won the fourth set 25-21 — forcing a do-or-die fifth set.

“As you can tell, this was two pretty evenly matched opponents,” Fisher said. “I thought we showed a lot of heart tonight … I thought we gained some momentum, ultimately we just dug a little too big of a hole in the fifth set to overcome.”

The Panthers came out quick in the fifth set — only their third game of the season to go into five sets — and took a 3-2 lead. But Michigan once again battled to go on a 9-0 run and take an 11-3 lead.

Pitt got some momentum going and made the score 13-9, but that was the closest it would get, as Michigan went on to win 15-9.

Markovic once again led the Panthers in kills with 19. Michigan senior Carly Skjodt led both teams with 20 kills.

Even in its loss, Pitt once again managed to make history. For the first time in the past three years, the Panthers won at least two sets in the second round of the NCAA Tournament.

“I definitely think it’s a step forward,” Fisher said. “But it still stings a lot. We clearly had a team we thought could make the run a little deeper and we fell short.”