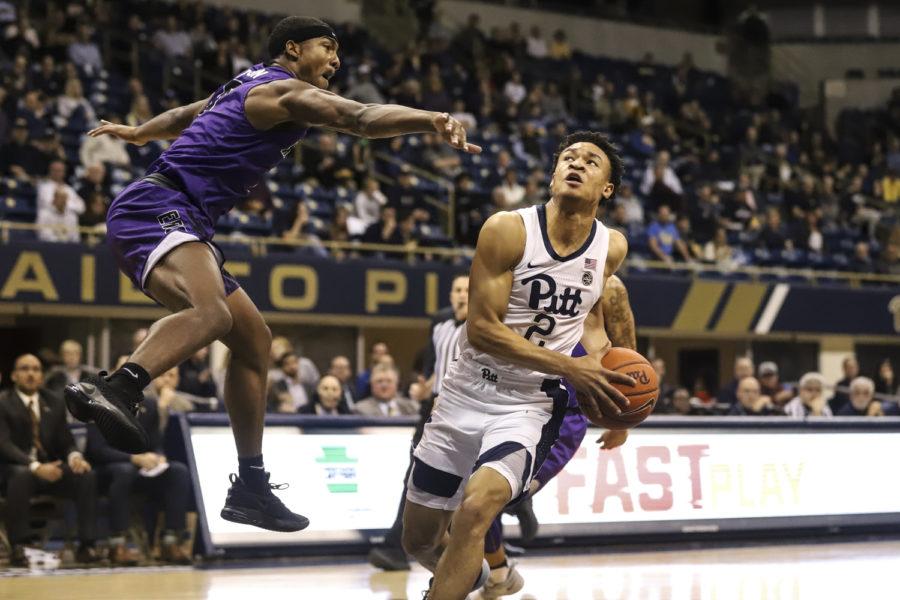 Despite a last-minute attempt from first-year guard Xavier Johnson, Pitt (7-2) lost its second game of the season to Niagara University (3-4), 71-70, Monday night at the Petersen Events Center.

This was Pitt’s second one-point loss of the season — the first being against Iowa — when the Panthers lost 69-68 with another last-minute shot coming up short.

“I don’t think we handled anything well,” head coach Jeff Capel said. “That’s on me and our staff, we have to do a better job … they outplayed us in every facet of the game.”

Niagara was the perfect matchup for Pitt when it came to size — only one player on the Purple Eagles’ roster measured  6-foot-10 or above. But the Panthers were unable to capitalize, trailing most of the game and failing to finish their comeback at the buzzer.

Pitt’s offensive struggles to start were telling of how the game would end up. The Panthers were held scoreless until nearly three minutes into the game.

Pittsburgh native and Niagara senior forward Dominic Robb put the Purple Eagles on the board first. Robb then made a big play, stuffing Johnson on a fast break a few possessions later, continuing Pitt’s struggles to get things started offensively.

Despite two forced turnovers, the Panthers were unable to score. At the first round of subs, 2:30 into the game, Pitt trailed 2-0.

Pitt’s first points came when sophomore center Terrell Brown hit an outside shot, followed closely by an Ellison layup. The Panthers and Purple Eagles proceeded to trade baskets, with graduate guard Sidy N’Dir knocking down Pitt’s first 3-pointer of the game at almost five minutes into the first half.

With more scoring came more fouls, and it didn’t take long for sophomore center Peace Ilegomah to record Pitt’s sixth foul of the first half — not even seven minutes in.

What the Panthers lacked in offensive success, they made up for with defensive aggression. They forced five turnovers in the first seven minutes and were very successful playing tight, on-ball defense. Pitt finished the game with 24 forced turnovers.

Part of Pitt’s early offensive troubles was due to leading scorers Johnson and senior guard Jared Wilson-Frame being held scoreless until 10 minutes remained in the first half.

Johnson hit a corner three to end his slow start and finished the game with 19 points, leading the team. Coming off back-to-back 3-point makes from Johnson and Toney, the Panthers took their largest lead of the game thus far at three.

Over the next few minutes, Pitt expanded its lead to six with points from Johnson, Toney and first-year guard Trey McGowens. With just less than eight minutes to go in the half, both teams reached the bonus with 13 combined fouls, also turning the ball over a combined 16 times.

The number of fouls called was due to officials calling a tight game, not allowing players to be too physical on the inside.

“I won’t really know until watching the film if the officials were calling the game close or not,” Niagara head coach Chris Casey said. “These are two teams that are very good at taking charges on the inside.”

Just before half, Capel called time-out with Pitt leading 33-32. The time-out turned out to be useless, as the Purple Eagles hit a jumper at the buzzer to take a 34-33 lead at the end of the first half.

Pitt had the ball to begin the second half and did not waste any time offensively. Toney hit a corner three after an assist from Ellison. The Purple Eagles answered with a basket of their own just inside the arc, and the game was once again tied less than a minute into the second half.

The foul trend continued in the second half as well — Johnson took a charge in the paint to negate a basket that would have given Niagara the lead.

This was quickly turned right back around on the Panthers, as Ellison picked up his third foul of the game when an offensive foul was called on his dribble-drive attempt.

Less than four minutes into the second half, six fouls had already been called, bringing the total for the game to 23.

The Purple Eagles’ run was finally halted when Ellison converted an alley-oop from Johnson. A McGowens layup then ushered the game into a media time-out with the Panthers still trailing by five, but starting to find some offensive success.

Just when it seemed that things may have been getting out of hand following two Pitt turnovers, McGowens hit his second three of the game to bring the Panthers’ deficit back to single digits.

Unfortunately, the Panthers were unable to string successful possessions together on both ends of the floor — hence, the offense would find success, the defense would falter and vice versa.

“There was nothing that we could do to contain them or to stop them, we had to just hope that they missed,” Capel said. “They executed very well and made some shots from guys who haven’t been shooting good percentages.”

Another Niagara run expanded the Purple Eagle lead to 12 as Johnson headed to the line for a crucial set of one-and-one free throws. Johnson missed his first attempt and was not the only Panther to struggle at the line — Pitt went 12-18 on free-throw attempts on the night.

With just less than five minutes to play and Niagara leading 64-58, it seemed as though Johnson had finally seen enough of Pitt losing. After he drew yet another charge, Johnson nailed a deep three to cut Pitt’s deficit to three — prompting an instantaneous Niagara time-out in an effort to quiet the Pitt fans.

Not wanting to allow their upset opportunity to slip through their fingers, the Purple Eagles came alive. Niagara continued to put Pitt at the line as a result of the double bonus, and the Panthers finally started to make them pay — Chukwuka hit both free throws, the first Panther to do so in the second half.

With 2:15 to go, Johnson drew a foul, causing Robb, who finished the game with 12 points, to foul out. His presence on the inside was a constant throughout the whole game on both offense and defense.

After more fouls and free-throw attempts for both teams, Johnson made it a two-point game with 41 seconds to go, putting Pitt in position to win at the buzzer.

In the final minutes, Pitt’s defense forced a Niagara turnover, but Wilson-Frame was unable to convert either of his shots in the ensuing possession.

“I take the blame for a lot of the things that happened tonight,” Wilson-Frame said. “I definitely take responsibility for the final score.”

Pitt was forced to foul and Niagara expanded its lead to four. Wilson-Frame then nailed a deep three with less than seven seconds to go. Pitt’s last chance came when Johnson put a shot up from inside — after bouncing around for what seemed like an eternity, it and the Panthers fell short.

Pitt’s next game will be on the road against West Virginia in the “Backyard Brawl” Saturday at noon.

“I’m pretty sure that we’ll be ready for that game,” Wilson-Frame said. “Let alone what happened today, everyone who watches college basketball knows how big [of a game] it is.”