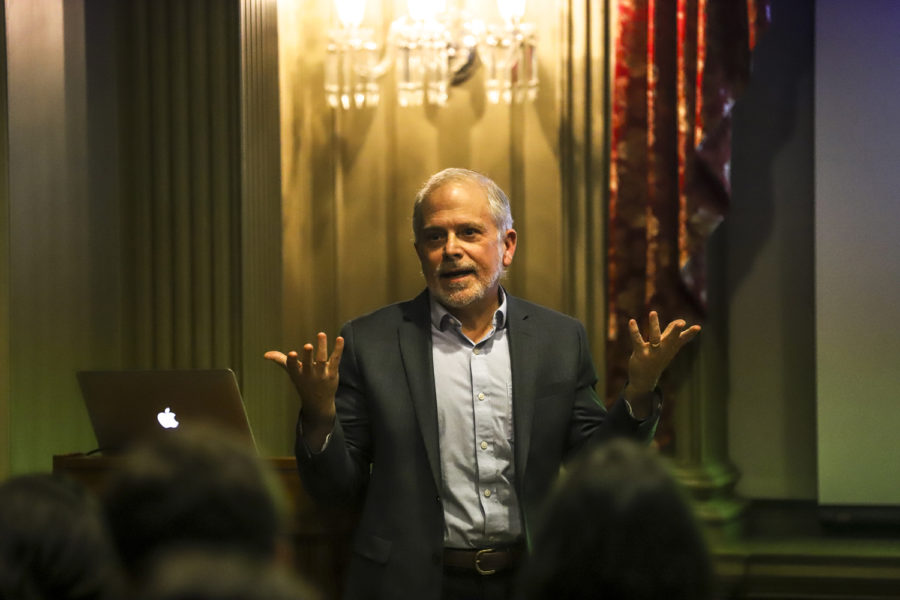 Dr. Peter Blier — a pediatric rheumatology physician and professor of pediatrics at the University of Massachusetts — used “Harry Potter” to lecture on genetics in the Cathedral of Learning Monday evening.

Between complicated Punnett Square diagrams and mutations of genes, the study of genetics can be a confusing concept to understand. But Dr. Peter Blier, a pediatric rheumatology doctor and professor of pediatrics at the University of Massachusetts, was able to teach a genetics lesson using a template many students would understand — “Harry Potter.”

“Genetics and ‘Harry Potter’ [are] really interesting on their own, but it’s [also] an interesting way to teach genetics in a very different way,” Blier said. “There’s a lot about genetics that informs how we think about ourselves as individuals and as a society.”

Around 30 fans of science and “Harry Potter” gathered Monday evening in the Cathedral of Learning to attend Blier’s lecture, “On Half-Blood, Half-Breeds, and ‘The So-Called Purity of Blood:’ An Examination of the Role of Genetics in the Magical World of ‘Harry Potter.’” According to Lisa Parker, the director of the Center for Bioethics and Health Law, this was the last event in the Medical Humanities Mondays lecture series — the goal of which was to connect disciplines in humanities and the sciences.

“We wanted to have this particular talk because it connected science, medicine and literature,” Parker said. “So one of the goals of this whole series of medical humanities is to do this bridging of the different disciplines and bringing the humanities and social sciences in contact with medicine.”

Blier said the characters in British author J.K. Rowling’s best-selling series made many important decisions off of a flawed system of genetics and breeding, which he suggested means Hogwarts School of Witchcraft and Wizardry needs to add a new course to its curriculum.

“Genetics isn’t something that’s taught at Hogwarts,” Blier said. “It wouldn’t even be an undergraduate course at Hogwarts. It could be a graduate seminar.”

However, Blier said a contradiction arises when one considers how someone like Hermione Granger, born from two Muggle parents, could be a wizard. In genetics, the offspring inherits traits from both the mother and father, so Blier said the cause of Hermione’s magical ability is not readily apparent. This suggests there may have been a mutation somewhere in her lineage.

Blier also said the term “half-breed” to classify creatures like werewolves in the series is misleading, since being a werewolf is not genetic, but rather inherited from a werewolf bite. In the books, Blier said centaurs are referred to as half-breeds, which, again, does not make sense.

“For example, centaurs are [called] half-breeds because they’re half horse and half human,” Blier said. “But they aren’t [an offspring] of a horse and a human, so they [should not] be [considered] a half-breed.”

Blier connected the genetics of “Harry Potter” back to Gregor Mendel, the founder of the modern science of genetics. Blier applied Mendel’s theory of dominant and recessive traits to “Harry Potter,” suggesting there are two alleles, or different expressions of a gene. One allele is for wizards and one for Muggles, and the wizard trait must be dominant because even if the parents are mixed-blood, the child will be a wizard.

Blier displayed a Punnett Square diagram — a diagram used to predict the genetic makeup of an organism in a breeding experiment — and demonstrated what the possible offspring of the Muggle-born Hermione and the pure-blood Ron Weasley, as well as the pure-blood Ginny Weasley and Muggle Dudley Dursley, would end up as. Because Hermione and Ron both have the dominant wizard gene, all of their children will be wizards. However, with Ginny and Dudley, Blier said it gets complicated.

The skills of wizards do not correlate with their blood, according to Blier. For example, some of the most powerful wizards, like Voldemort and Dumbledore, are half-bloods, and some of the weakest wizards, like Neville Longbottom, are pure-blood.

Blier said there are scholarly books that suggest there could be other genes for magic that would explain aptitude for specific kinds of wizardry, such as proficiency in transfiguration, potions and charms. This is separate to the notion of blood purity and could explain why some wizards are more skillful than others.

“[The series] describes how complex inherited traits are, [such as] things like height [and] intelligence,” Blier said. “J.K. Rowling is not a scientist, but just understands the world so well. She creates without knowing the framework for science.”`

Christine Case, a first-year English doctoral student in children’s literature, said she thinks Rowling is smart for having readers question genetics and scientific theories through her writing. She said she came to this event because of her utter obsession with all things “Harry Potter.”

She said she found herself trying to track the genetics of the different characters throughout the talk and she was fascinated by the lack of correlation between blood purity and wizard aptitude.

“I’m interested in this notion how there can’t be any correlation with blood purity and skill because there were more poor [wizards] that were more pure-blooded,” Case said. “But I know correlation is not causation.”

Parker said she thinks learning about a complicated subject like genetics in the context of a beloved literature series is effective because it is enjoyable and a source of common knowledge.

“The idea that people don’t have any ideas about genetics or other scientific concepts is false,” Parker said. “Everyone gets their ideas from some place, so it’s nice to engage with this less academic understanding and really delve into it, because this is where people get their common knowledge about what’s inherited and the importance of a trait.”

In his final thoughts, Blier said despite the contradictions in the “Harry Potter” books about genetics, they allow for good analysis and deeper thinking.

“These books actually have good science in them, [and they] help to better understand the structure of the world,” Blier said.