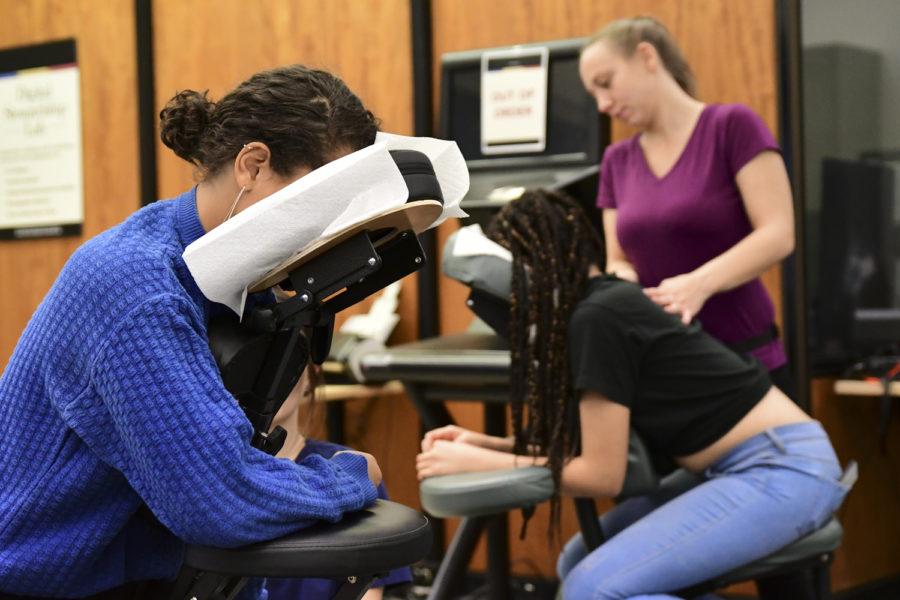 ‘Twas the week before finals, and all through the campus, students scrambled to study for the last exams of the semester. On Monday night at Hillman, some settled in for a long winter’s LNAP — the “Long Night Against Procrastination.”

The event, hosted by the Office of the First Year Experience, offered students a chance to escape from the pressure of finals and de-stress. For some students, that meant receiving a massage from a trained masseuse or playing a game of Mario Kart. For others, like Riza Swartz, a junior marketing and business information systems major, it meant petting a therapy dog like Lola, a pit bull and boxer mix.

She scratched the dog, cooing a little.

“I love animals, so this is awesome,” she said. “Her ears are so cute!”

Over the course of four hours, a few hundred people filtered in and out of the LNAP, held in the Digital Scholarship Commons on the ground floor of Hillman. The event was loosely themed around the five senses. Dogs and massage were touch. A spread of chips and drinks, laid out on a long table at the side of the room, served for taste. Students could mix their own smells at an aromatherapy table. At another table, they could spin a wheel to win a face mask — sight — or a pair of earplugs — sound.

Donna Gupta, a mentor with FYE, welcomed students into the room.

“Sometimes, we think it should be called ‘Long Night of Procrastination,’ just because clearly no one’s studying right now,” Gupta said. “Either way, our goal is just to de-stress people.”

Gupta still handed out flyers with information about peer tutors, for the students who do use LNAP to study. The tutors have set hours where they’re available in Hillman to help students with languages and “basically anything” if students need extra assistance, she said.

“But [LNAP is] also a way for people to just enjoy themselves and relax, even though it’s very hectic right now,” Gupta said.

According to Ashlan Hudson, a resident director working the event, the event was created to relieve some of the pressure of finals.

“We really wanted to create a space where students could take a little break,” Hudson said. “Take a little break from studying, try to get some rejuvenation and just a little bit more motivation to go back to their studies.”

Though FYE aims to help first-years adjust to life on campus, LNAP and the office’s other events are open to students of any year. Many students ducked into the room as soon as they saw the therapy pets, dropping to the ground to pet Lola and her fellow dogs.

Lola’s partner, human Emily Born, watched from a chair nearby. The two have been paired together for about a month through the Animal Friends’ Therapets therapy dog program, visiting schools and community centers to calm sad and stressed-out souls with Lola’s floppy ears.

“I think everyone who walks in just goes, ‘Dog!’ and it’s an immediate reaction,” Born said.

Over at the aromatherapy table, students could choose from six scents — lavender, eucalyptus, tea tree, cinnamon, chamomile and lemon. Hudson, the resident director, showed students how to mix their scents. After pouring out a few drops of their chosen scent, each student filled up the rest of the small bottle with coconut oil.

“We’re residence life, so we know that students can’t have candles in their rooms,” Hudson said.  “We were like, ‘What can we do that’s going to make a room smell nice, that’s something that they can have?’”

As they came and went, students were invited to pick up a sticky note, write a few words and stick it to a whiteboard near the door that asked, “What’s your goal?”

Some of the goals were ambitious. There were several that read “pass O-Chem,” a “get into grad school” and a “4.0.” Other students were more reserved — “finish notecards” or “not fail.” One student, perhaps not thinking specifically about finals, had written “buy a hamster.”

But some students couldn’t afford to take even one night off from work. Bryan Runyon, a junior supply chain marketing and business information systems major, sat in the back of the room. His laptop and a line of Kool-Aid pouches rested in front of him. After visiting the snacks table, he had settled down to study.

“I’m waiting for some friends,” he said, gesturing to the Kool-Aid. “I’m here because I have a final on Wednesday.”