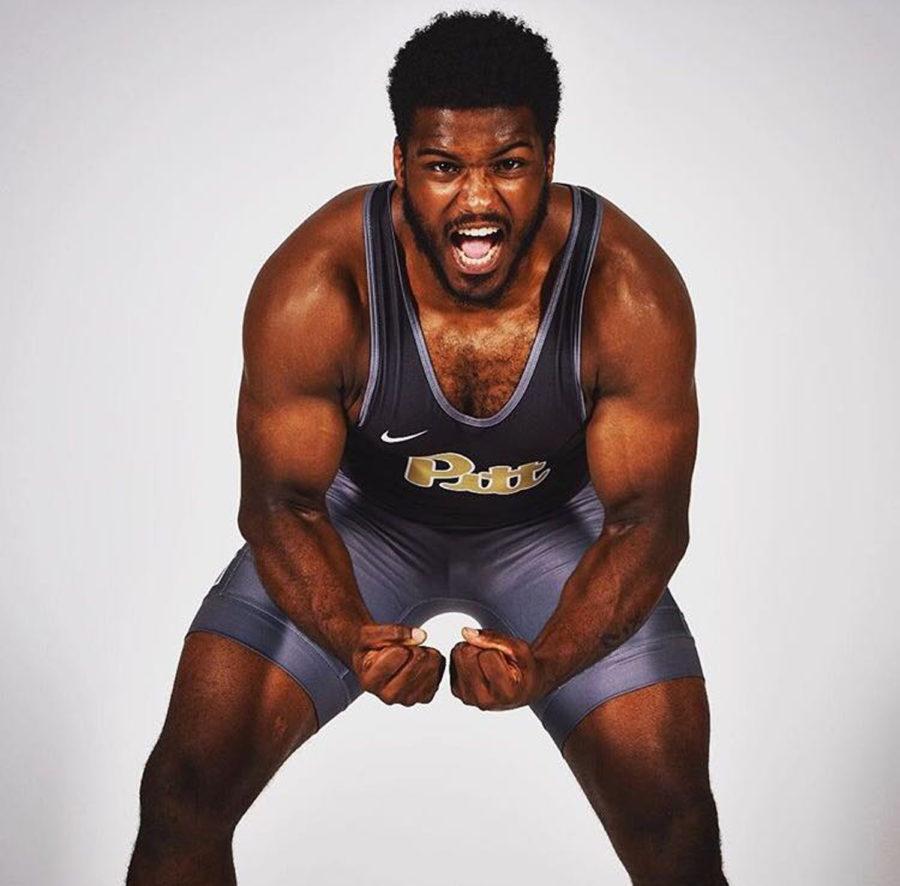 Pitt’s wrestling team took to Sin City as it participated in the 37th annual Cliff Keen Las Vegas Invitational this weekend. The 24th-ranked squad finished seventh out of 43 teams, with four of its best men reaching the podium. One of those men was Pittsburgh’s new junior heavyweight, Demetrius Thomas.

Thomas spent his first two seasons at William Baptist University in Arkansas, where he found tremendous success, piling up a program-record 40 wins and winning the NAIA National Championships — and that was just in his first year. But he never planned on pursuing wrestling for long.

“Going into college, I thought that I was honestly not a good wrestler,” Thomas said. “Back in high school, I took third at state and I thought, ‘Hey, that’s pretty good, I guess.’ But I went to a national tournament and I didn’t do so well. I didn’t think I was going to do as well as I am now.”

Now, Thomas is tearing it up at the Division I level. He’d been undefeated through two matches before Cliff Keen, crushing CSU Bakersfield sophomore Jacob Sieder 18-2 and picking up a meet-clinching win over sophomore Carter Isley from No. 14 Northern Iowa.

At Las Vegas, Thomas lost his first match to UNK junior Jarrod Hinrichs by a score of 8-6, but proceeded to go on a rampage in the consolation bracket, knocking off ranked opponents left and right. He went on a seven-match winning streak, in which he picked up three pins, three major decisions and one minor decision before he lost a third-place bout to No. 20 Zach Elam, a first-year from Missouri.

The Panthers saw Thomas’ potential to wreak havoc at the heavyweight level when he was still at William Baptist, and set their sights on him to join their program. But it was tough for him to make the decision to leave because William Baptist was a small school and they treated him well there.

“As the years went on and I got better, I got looks from other schools,” Thomas said. “They asked me if I was looking to transfer. I’m never not looking for a better opportunity, but as of right now, I’m staying where I am.”

Pitt stayed resilient in its recruiting, and its competitiveness and relevance on the Division I scene ultimately attracted Thomas, along with the fact that he could get a better education there.

“Pitt had reached out to me, we talked a little bit and I looked them up and saw that they had a high ranking,” Thomas said. “They also told me that they had physical therapy there as well. It was either graduate from Williams with a simple biology degree or graduate from the University of Pittsburgh.”

It’s safe to say that the Panthers’ due diligence panned out, as he now stands at 9-2 on the season. They had a hole in their lineup at the heavyweight slot and Thomas was the perfect fit. He’s a hard worker and head coach Keith Gavin has taken notice.

“He just goes out there and competes with everyone he wrestles with and we have a couple other guys who do that, too,” Gavin said. “We’re hoping that’s contagious. That’s the kind of culture that we need to have here.”

Despite his success, Thomas said he never really feels the pressure from his coaches, teammates or fans.

“I keep a humble mindset, you know, I could lose to anybody,” Thomas said. “The only pressure that I ever feel is from myself, that sometimes I might not be doing enough. I don’t feel like I have to prove myself to anyone else.”

Thomas has already gained a reputation for going the extra mile on the mat and in practice. His teammates appreciate his level of effort and dedication, like first-year Micky Phillippi, who has found great success this season, placing second at Cliff Keen.

“We’re in there working as hard as we can in the weight room and in the wrestling room, and that kind of rubs off on everyone else,” Phillippi said. “Outside of everything, too, is something I feel is really big, just working hard in the classroom and doing the right things on the weekends as well.”

This is something Thomas prides himself on, as the pursuit of a degree in physical therapy is partially what drove him to Pitt in the first place.

Meanwhile, on the mat, Meech — as his friends call him — has made a habit of upsetting ranked opponents, which he’s done three times already this season.

“Honestly, when I go out there, I have no idea who’s ranked what,” Thomas said. “When I go out, I still feel like I’m the worst wrestler out there. But I feel like even though I’m not the best, I’m going to try my hardest and give my heart out to try and beat my opponent.”

While facing top competition is new to Thomas, it’s something his head coach has plenty of personal experience with. Gavin, a 2008 Pitt graduate, was a 174-pound NCAA champion and a two-time All-American. He spoke on Thomas’s chances of reaching that level and possibly even reaching the podium in the NCAA tournament.

“He has the work ethic and the athleticism to beat anyone,” Gavin said. “He’s a junior this year, so I think it’s really just a race against the clock of how quickly he can improve his skill set. He needs to get better at certain technical skills, and he absolutely will. It’s just a matter of ‘Will he improve in time?’”

Pitt just recently entered the Top-25 rankings at No. 24 with its win over Northern Iowa and its strong showing at Cliff Keen. This was largely due to Thomas’ strong performances. However, he isn’t allowing that to go to his head, and Gavin won’t let him get ahead of himself, either.

“It’s a day-to-day process,” Gavin said. “There’s always stuff you need to work on in our sport. We’re in a really tough conference. The ACC has some really tough opponents. So, we just take it day-by-day, but we have some guys on our team who can really beat anybody.”

The Panthers have a bit of a break from competition between Cliff Keen and their next meet, which will take place in the Fitzgerald Field House when they host West Virginia on Dec. 15. Thomas hopes to continue his run of dominance in the Backyard Brawl and help Pitt climb the rankings. The team certainly thinks he can keep it up.

“He’ll never lose because his opponent outworks him,” Gavin said. “It’s just not in his makeup to do that.”