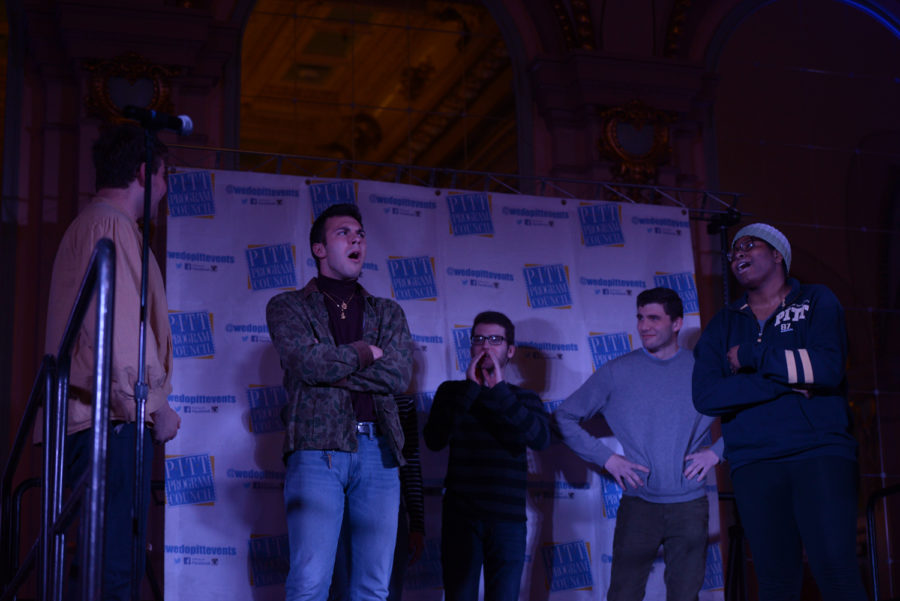 By Alex Dolinger, For The Pitt News

Laughter, improvisational comedy and jokes about the Hillman Library toilets filled the William Pitt Union ballroom on Wednesday night during the Pitt Program Council event, “So You Think You’re Funny.”

The competition was open to any student willing to get on stage and give stand-up comedy a go, with the best comic earning the prize of opening for comedian Nicole Byer at PPC’s spring lecture event. One guest judge, radio comedian Jim Krenn, and two student judges, Pitt Program Council public relations director Eva Lin Feindt and The Pitt News’ own culture editor Sarah Connor, graded the levels of laughs each act earned, and ultimately chose a lucky winner.

Some comedians chose to joke about their dating lives or their religious and political views, but others chose to present the relatable, comedic parts of being a Pitt student. One such competitor was junior natural sciences major Kathryn Human.

Human gained laughs from the audience with a bit in her stand-up act about Hillman Library, specifically the restrooms there.

These comments won Human many laughs and grins from the audience, with many students shaking their heads in agreement with her humorous observations.

“You’ve already risked your health by entering this bathroom, and you gotta figure out how to protect yourself from the actual toilet,” Human added. “So now you gotta reach in and get the toilet paper. But, I’m pretty sure that the factory where the toilet paper comes from only for Hillman Library, there’s a job for someone to sit on the toilet paper rolls to make them like an oval so they don’t spin properly.”

This joke was another winner for Human, which likely helped to put her in a good place with the judges. She came to this competition as a first-time comedian, and left with the opportunity to open for Byer this January. Human has been preparing for this night since she heard about it at another Pitt Program Council event just a couple of weeks ago.

“I started writing little bits on my iPhone Notes,” she said.  “I was asking my friends, ‘are there any funny stories that I’ve told you?’”

Following her iPhone note-making, she began fleshing out these stories and practicing them aloud in preparation. That preparation seemed to pay off once Human got on stage.

“I felt good on stage, and the crowd definitely had a good energy today,” she said.

The energy in the crowd that Human noticed seemed to spur on numerous other comedians as well. The audience was particularly amused by the jokes from senior English writing major Lorenzo DiSilvio, who shared his experiences with the woes of “medicine-induced diabetes.”  DiSilvio explained that the use of antidepressants gave him diabetes.

“It’s just like kicking you while you’re down,” he said. “And that kick just shuts off your pancreas.”

Another notable performance of the night was that of the student improv group, Ruckus.They were the only group performance, creating a sketch based on a suggestion of a movie genre from the audience — horror. The students portrayed a group of kids staying in a haunted cabin, populated by bored ghosts.

Ward was especially keen on booking Byer because she wants to offer lectures that have more diversity.

“We were looking for a comedian and I kind of specifically wanted a female because I know that there’s not many females in comedy,” she said.

Ward wanted to have a student open up for Byer at the show, but was not sure who to turn to. She was not too familiar with comedians on campus, so this competition was a solution to that problem.

Ward ended up finding her opener in Human — another female comedian — who was cheered on by her friends in the audience. One of these friends, junior biology major Carson Clark, was excited about the relatable content of Human’s performance.

“I heard from a mutual friend [that she was performing], and thought we’d come out and support her,” Clark said. “She had a joke about the Hillman toilet stalls, which is relevant to Pitt culture. I thought that was really funny.”

“Before the audience and stuff got here, everybody that, you know, was in the show, we were just kind of chatting and cracking jokes,” she said. “It was just really nice to get to know the other people in the show. I really enjoyed seeing everybody’s different comedy styles, because I don’t think you think about that a lot, how much variety there is.”