Panthers band together in split performances 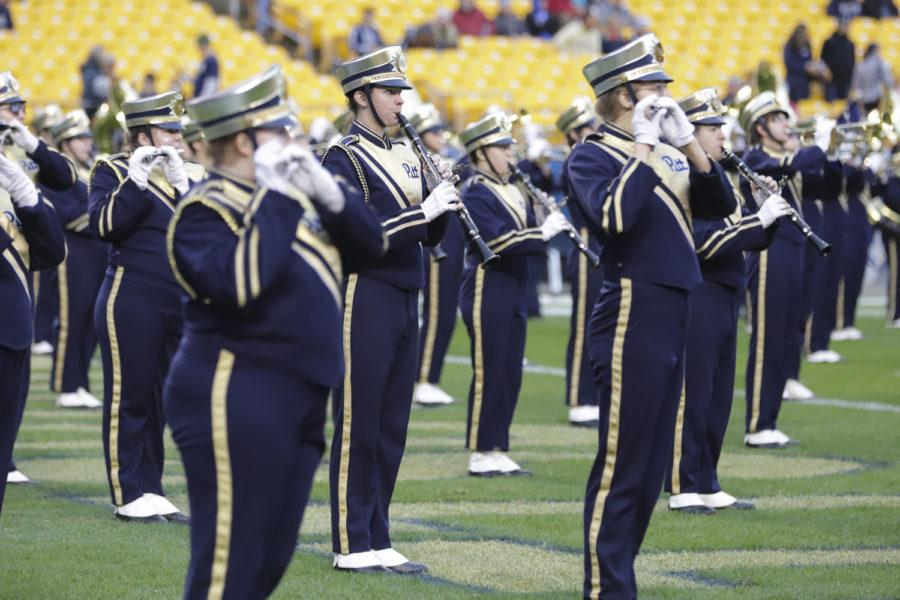 The woodwind section of Pitt’s marching band performs at Heinz Field during a break in the Panthers’ game against Duke on Oct. 27.

When the men’s basketball non-conference schedule was announced July 23, no one thought much about the City Game against rival Duquesne scheduled for Nov. 30, the same weekend as the ACC Football Championship game.

Pitt’s football team was coming off a 5-7 season and was picked to finish fifth out of seven in the ACC Coastal Division preseason poll, receiving no championship votes. After Pitt started its football season 2-3, there was even less concern that the basketball and footballs team would play the same weekend — until late October, when the Panthers emerged 3-1 against conference opponents.

“We started thinking about it I guess that last weekend in October,” Pitt Director of Bands Brad Townsend said. “When we kept climbing up the ranks and looking like we had a chance at winning the Coastal Division.”

The band started preparing for the possibility of playing at the championship game by reserving buses to Charlotte, North Carolina, where the game was played. Townsend knew if Pitt played in the ACC Championship game, it would be all hands on deck, leaving no one to play at the basketball game or any other events that weekend.

After Pitt beat Virginia 23-13 on Nov. 2, the likelihood there would be no band at the City Game became even more possible. In order to get a band there, Townsend started talking to the alumni band members about covering for them that Friday.

Around the same time, the volleyball team was 25-1 and Townsend realized there was a good chance Pitt would host the first and second rounds of the NCAA Tournament in late November. He started reaching out to area schools to see if any would be able to play for the volleyball team.

Townsend’s hunch was right. Three weeks later on Nov. 25, the NCAA announced Pitt Volleyball would host the first and second rounds of the tournament for the first time in history — Nov. 30 and 31.

“I was feeling really horrible that there was so much going on and we were going to have to leave something go,” Townsend said. “Especially with how hard the women’s volleyball team has worked and their success and the first time we are hosting and all that, I was feeling horrible.”

When no area high schools were able to fill in, Townsend started reaching out to area colleges, including IUP, Cal U, Robert Morris and Slippery Rock.

A week and a half before the games were scheduled, Townsend finally heard back from Slippery Rock, who said they would be able to play Friday night.

“We were honored and thrilled,” Slippery Rock Band Director Jonathan Helmick said. “The neat thing about music is that it’s kind of a bond, I guess would be a great way to say it. Bands have a tendency to stick together and support each other and whenever somebody reaches out we try our best whenever possible to help out when we can.”

Before they committed, Helmick made sure he had the musicians he needed. Their biggest struggle was finding musicians on such short notice. After securing a set player and a percussionist, they tried to balance the woodwinds and brass sections. Helmick also added some extra practices to make sure they were ready.

While Slippery Rock was set to play Friday night, there was still a problem. If the volleyball team won, it would play again Saturday, and there was no band reserved for that one.

The Tuesday before the game, Townsend finally heard back from Duquesne’s band that they would be able to play Saturday night if the volleyball team won Friday.

And even though Pitt beat Duquesne 73-54 in the City Game the night before, Duquesne still showed up Saturday to cheer Pitt on in its second round matchup against Michigan.

“I’ll admit, some students were a little beaten up about the fact that Pitt beat us in the City Game,” Duquesne Pep band assistant Allen Fry said. “For the most part, a lot of us had a lot of fun, we enjoyed being able to play our instruments, that’s the main thing we like to do … But yeah, as for some of the students, they were a little bitter about it.”

Neither Slippery Rock nor Duquesne play for the volleyball team at their college, so it was a new experience for both bands. To help them with the transition, a representative from the Pitt Band taught them some of the chants Pitt’s band usually does.

“I did like the one where it goes, ‘Blood makes the court slick, kill kill kill!’” Fry said. “I thought that was kind of fun just to say.”

Helmick enjoyed helping Pitt by getting in the heads of the Panthers’ opponents. Slippery Rock accomplished this by counting every time the opposing team bounced the ball before a serve.

According to Townsend, part of the deal of playing at the volleyball game was making sure the bands were also prepared to support Pitt. So, for the bands to look the part, the marketing team provided Pitt T-shirts for both teams and a Pitt polo shirt and jacket for the band directors.

“It was sort of like a thank-you gift,” Assistant Director of Marketing Ashton Salopek said. “For them for taking time out of their day to come support Pitt Volleyball.”

Salopek is in charge of marketing for the volleyball, gymnastics and softball teams. Part of her job includes making the atmosphere of the games as good as it can be. To do that, she has been working with the band all season to create a bond between the teams and the band.

When she realized there may not be a band for the volleyball tournament, Salopek started to get nervous as well. But when she found out there would be replacement bands, she was thrilled.

“I can honestly say without them it would have been really hard to create the atmosphere we had,” Salopek said. “I’m just super thankful they were able to take time out of their schedules to come cheer on Pitt Volleyball.”

This wasn’t the first time Pitt has been involved in something like this. During the 2016 NCAA Basketball Tournament, Weber State wasn’t able to bring their band, so after playing Pitt’s game, the band went to the other side of the arena to cheer on the Wildcats.

Knowing what it is like to be on both sides of the situation, Townsend said if the Slippery Rock or Duquesne bands ever need help in the future, Pitt is willing to try and answer the call.

According to Fry, Duquesne’s band looks forward to helping out again in the future. And Hemlick would love it if the two bands could work together in the future.

“Hopefully we will get to talk and dream up some ways we could collaborate in the future,” Hemlick said. “If so, I look forward to it.”