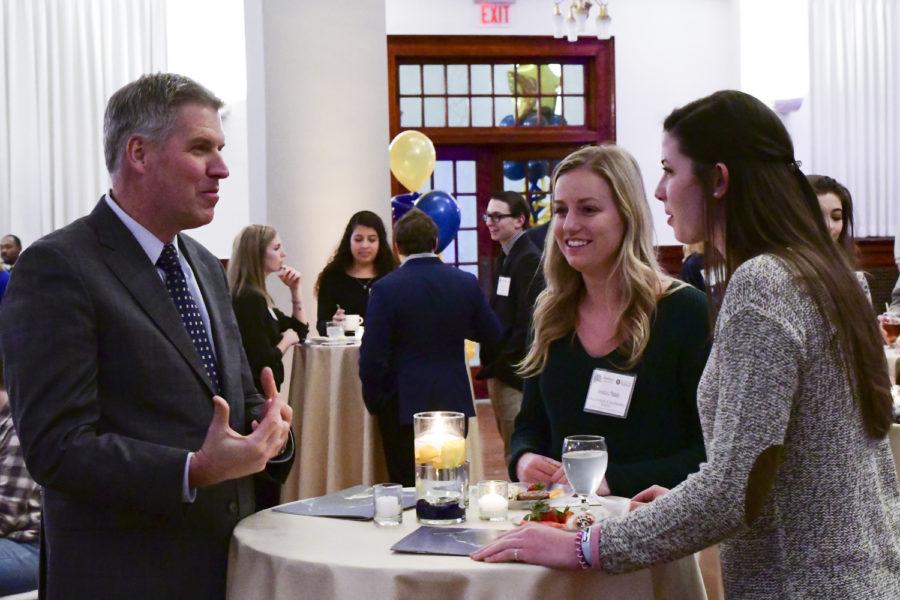 Chancellor Patrick Gallagher speaks with students at the event commemorating the first class of Panthers Forward — 150 seniors who will receive $5,000 in direct federal student loan relief.

The average Pitt student graduates with nearly $40,000 in student debt. But while many are still paying back their debt, some are now helping to pay others’.

The University of Pittsburgh recognized the inaugural Panthers Forward class on Friday afternoon in Alumni Hall. The program, which was announced in October 2018, seeks to relieve student debt by using financial support from the University, and is one of the first of its kind in the nation.

“I really believe that the power of this program is not in the fund and the loan forgiveness and all of the mechanics that we talked about,” Chancellor Patrick Gallagher said at the event. “It’s gonna work or not work based on this being a great experience, on this being something that’s fulfilling.”

The 150 seniors who were accepted into the program will each receive up to $5,000 in direct federal student loan relief, which comes from the University budget at a cost of roughly $750,000. Alumni Ambassadors serve as mentors for the students.

Maggie Kennedy, president of the Student Government Board, was the first person to address the crowd of 200, and said the program will offer more opportunities to underserved communities.

“In 2018, it has become far too common for students our age [to] severely struggle when trying to pay for college, even if their grades and their extracurriculars and all sorts of other things should earn them a spot to go to university,” Kennedy said. “Sometimes the financial burden is just too much.”

Kenyon Bonner, Pitt’s vice provost and dean of students, said students should recognize the privilege they have in attending the University of Pittsburgh and give back to this program when they have the chance.

“One of the hopes we have for all of the students in this room … is that you remember to give back, and lift as you climb,” Bonner said. “We hope that when you move on to do great things in this world … you remember that notion of lifting as you climb.”

Many students who were accepted to the program said the program eases their financial burden as they graduate. Cassidee Knott, a senior history major, is one of four kids, which made the financial burden of college greater for her family. She said financial support like this is a good first step toward relieving student debt nationwide.

“It helps students with student loans,” Knott said. “Obviously student debt is a major problem in the country, and for Pitt to acknowledge that and try to find ways to help students with that is really great.”

Raven Hilfiker, a senior psychology major, said this program relieves some of the stress she feels about the uncertainty of her future.

“It’s been really stressful thinking about graduation,” she said. “It’s exciting because it provides a lot of opportunities to talk to people who have been through what we’ve been through and are really doing well.”

While the debt relief was important to everybody, many students also appreciated the direct access to the alumni network. Morgan Puterbaugh, a senior political science and linguistics major, said she wanted to use the program to network with successful alumni.

“It’s important to me because it’s really good for networking,” she said. “I’m going to be graduating and I need to find a job.”

Parents of accepted students were thankful for the opportunities the program afforded their children. Phyllis Knott, Cassidee Knott’s mother, said she wished this program had been around when she attended college so that she could have had more guidance.

“I was the first one in my family to go to college, so I didn’t really have a mentor or anybody to ask questions or guide me in any way,” Phyllis Knott said. “So I think this program is very helpful in a lot of ways, not just the financial but also just the mentoring and having the ability for alumni to kind of get involved.”

At the event, some of the Alumni Ambassadors mingled with the students in the program, talking about their college careers and their future plans. Larry Fitzgerald, an Alumni Ambassador who graduated with a degree in chemistry in 1977, said he was happy to help when he heard about the program.

“I’m recently retired, and I’m looking for opportunities to volunteer,” Fitzgerald said. “It’s an opportunity for me to help young people.”

Students participating were excited to eventually pay their debt forward — allowing the program to continue for years to come.

“Once I get settled, I think it’s really important to give back to other students just like me who are seniors and just terrified of the debt they’re going to acquire once they graduate,” Cassidee Knott said. “To have someone acknowledge that who is someone who went through it is really great.”

Correction: The first year of Panthers Forward is funded by the provost office, not alumni donations.