Panthers come up short to Stanford in Sun Bowl, 14-13 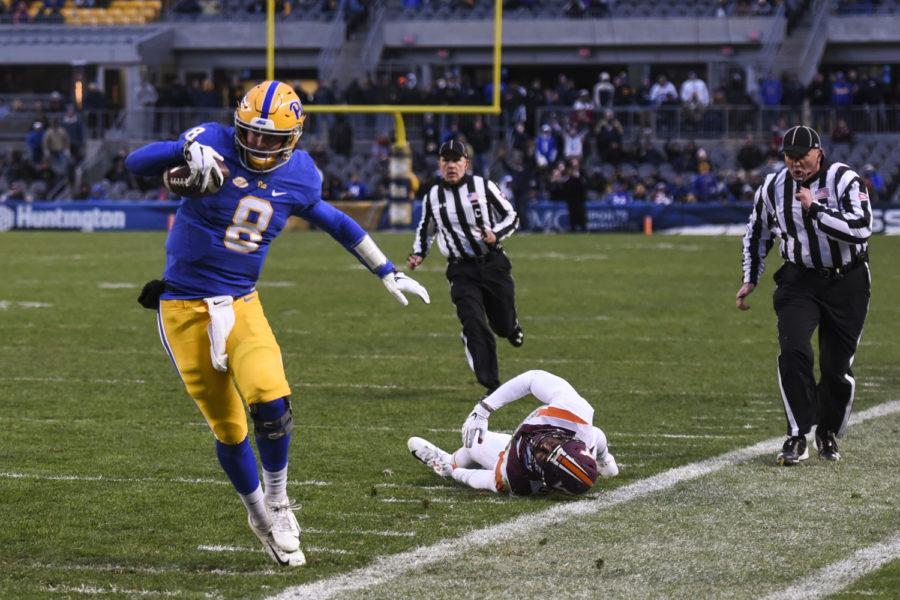 Despite out-gaining its opponent in nearly every facet of the game, the Pitt football team fell to Stanford, 14-13, in the Hyundai Sun Bowl Monday afternoon, thus failing to crack .500 for the second straight season.

The Panthers (7-7) entered Monday’s game with the opportunity to end their season on a positive note after consecutive ugly losses to Miami and Clemson in which they scored a combined 13 points. The Cardinal (9-4), meanwhile, came in riding a three-game win streak after a mediocre start to the season, but were without star senior running back Bryce Love, who sat out to focus on the NFL draft.

And although Pitt outpaced the Cardinal in total yards (344-208), rushing yards (208-103) and passing yards (136-105), the Panthers failed to put points on the board when it counted, twice settling for field goals after coming within 10 yards of the end zone.

After receiving the opening kickoff, Stanford looked sluggish on its opening drive. The Cardinal gained zero yards on three plays, foreshadowing their offensive struggles throughout the first quarter.

The Panthers at least managed to pick up a first down, with senior running backs Qadree Ollison and Darrin Hall — Pitt’s first rushing duo in school history with 1,000 yards each in the same season — showing early success by running for gains of five and seven yards, respectively. But the drive stalled out after seven plays, and the Panthers punted the ball away.

Stanford’s offense looked toothless without Love, going three-and-out on its next three possessions — they had just one yard of total offense by the end of the first quarter, while the Panthers had 114. Still, the game remained scoreless.

Pitt finally strung together a lengthy drive thanks to a 47-yard run from Hall which brought the Panthers to the opposing 10. They made it as far as the four yard line before sophomore quarterback Kenny Pickett got sacked, forcing them to settle for a 29-yard field goal and take a 3-0 lead.

Junior Stanford quarterback K.J. Costello came into the game as the second-leading passer in the Pac-12 but looked flawed early on, completing one of his first seven passes for just two yards. Taking over on downs with 11:39 left in the second quarter, he began to look more like the polished NFL prospect. Costello completed all three of his passes on the seven-play, 64-yard drive, including a 29-yarder to senior receiver JJ Arcega-Whiteside that brought the Cardinal to the Pitt five. Two plays later, senior running back Cameron Scarlett punched the ball in from two yards out to take a 7-3 Stanford lead.

The Panthers responded with an impressive possession of their own, driving 75 yards on nine plays. Pickett was the centerpiece of the attack, picking up 30 yards on the ground and 24 through the air. Hall put the cherry on top with a six-yard touchdown rush as the sidecar out of the shotgun, putting Pitt back on top, 10-7, with 2:26 remaining in the half.

The two teams would exchange fruitless possessions before going into the halftime locker room with the Panthers still leading 10-7.

Despite Pitt holding only a three-point lead, the box score heavily favored the Panthers at the break. They led Stanford in total yards by a 226-85 margin, including 155-41 yards rushing and 71-44 yards passing.

The low-scoring, defense-oriented stalemate continued into the third quarter, with Pitt going three-and-out and Stanford six-and-out on their first offensive opportunities.

Once again, the Panthers took advantage of a big play to get into scoring position, this time on a 41-yard bomb from Pickett to sophomore wideout Taysir Mack which gave them ideal field position at the Stanford nine. Pitt again failed to find the end zone, eventually opting for a 28-yard field goal from sophomore kicker Alex Kessman to go up 13-7.

The score remained that way until the beginning of the fourth quarter, with the Cardinal taking possession on their own 22. Scarlett got the offense moving with four straight carries for 14 yards. Then, as on their first scoring drive, Costello hooked up with Arcega-Whiteside for a deep 49-yard connection, bringing the Cardinal all the way down to Pitt’s three yard line.

On first and goal, Pitt wrapped up Costello in the backfield and forced him to fumble — but the ball popped forward into the end zone, right into the hands of Scarlett for the touchdown. The peculiar play put Stanford up 14-13 with 11:28 left in the contest.

The Panthers responded by making it as far as the Stanford 37 — but no further, forcing them to settle for a 55-yard field goal attempt from Kessman, who entered the game having made all four of his previous attempts from 50 or more yards this season. However, he badly shanked the kick, causing it to go far wide right and keeping the score at 14-13 Stanford.

A quality Cardinal punt pinned the Panthers on their own four yard line with 3:49 to make a game-winning drive. After three straight botched plays, head coach Pat Narduzzi found himself in a tough spot on fourth and 11 — put the game on the line and go for the first down, or punt and hope to force Stanford into a three-and-out. He elected the former, and Pickett connected with junior receiver Maurice Ffrench on a 15-yard pickup to keep Pitt’s hopes alive.

About one minute later, Pitt once again faced a fourth down, this time a more manageable fourth-and-three from their own 25. With 1:44 remaining and the game officially on the line, Pickett threw an errant ball into the dirt while trying to convert on a quick slant, thus bringing the Panthers’ bowl victory hopes to an end.

Hall paced all rushers on the day with 123 yards and a touchdown on 16 attempts. Ollison, his primary backfield mate, managed only 23 yards on five carries — he missed the entire second half with an ankle sprain.

The loss brings Pitt’s all-time Sun Bowl record to 2-2, with the team most recently appearing in 2008, suffering a similarly low-scoring loss, 3-0, to Oregon State. The Panthers’ 7-7 record on the season marks an improvement over 2017’s 5-7 campaign.