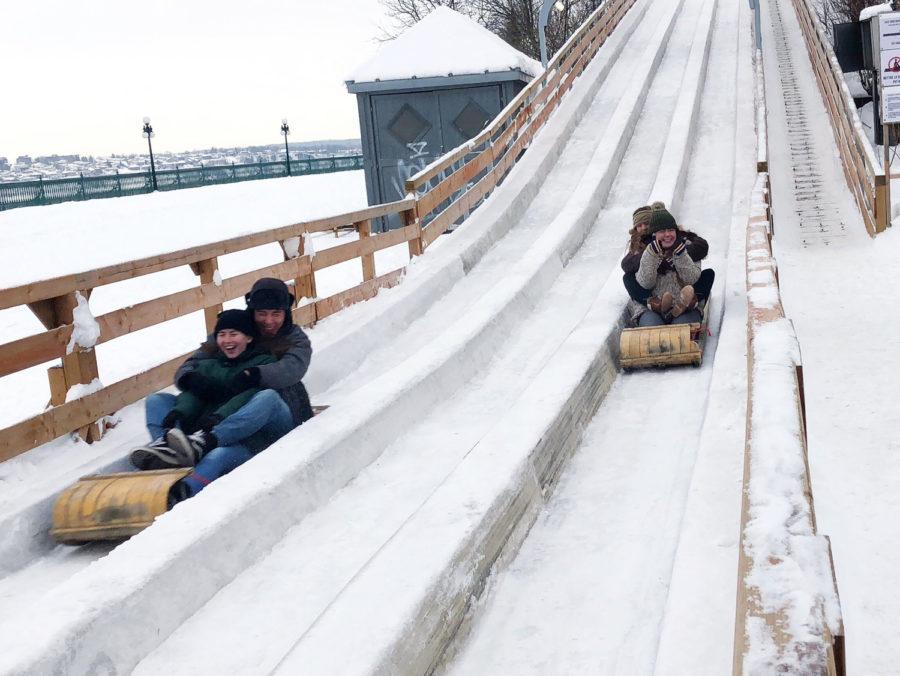 One activity dominated every other this winter break — getting lunch. Not just eating lunch, but going out for lunch with friends and family.

I meet an opinions editor from semesters past at Eat’n Park. We plan for 1:30 p.m. and we both show up 15 minutes late, because Henry always runs late and I know Henry is going to run late. The population inside Eat-N-Park consists of three elderly couples and a waitstaff who seems less than thrilled that people have the audacity to order food.

My friends, Victoria and Lauren, and I spend 45 minutes looking for parking at the mall. Finding none, we decide to get lunch first, deciding on a time-honored classic from our high school years — Chipotle. Victoria spends the entire time taking minuscule bites from a cheese quesadilla, trying not to disturb her mouth, fresh from wisdom-teeth surgery.

My dad and I spend a harrowing hour in a Marshall’s trying to figure out how much gift wrap we need to buy. I offer to treat my dad to lunch at our favorite Italian restaurant, Illiano’s. If you’re ever in Middletown, Connecticut, check it out. I order lobster ravioli every time. The guys at the counter know my dad, and give us free slices of pizza. We end up having to go out for more gift wrap.

My uncle and I go for a post-Christmas lunch. We decide on a seafood restaurant near my grandparents’ house. We debate which salad sounds the best on the menu for 10 minutes, before I remember that Pittsburgh is 500 miles further inland, and that if I want seafood I should probably get it here.

When I returned home to the Christmas City — Bethlehem, Pennsylvania — I noticed for the first time a glass panel over the nativity scene in front of our church. In the center of the city, on a main road lined with homes and foot traffic, someone had apparently stolen baby Jesus, and the church was trying to prevent the replacement infant from being stolen.

I don’t remember that glass panel being there last year, and the church didn’t mention Jesus’ kidnapping in the December newsletter. But apparently, as my parents explained, baby Jesus was stolen years ago and the glass-covered display has been there ever since. Come to think of it, I only faintly remember the 20-foot steel candle display appearing across the street from my second favorite Wawa. I can’t place exactly when the miniature Christmas trees were added to the light posts, or if the city ever bothered to take them down after last Christmas.

Time feels strange leading up to Christmas, and even after, like it all blurs and layers together, leaving me displaced within it.

Once, when I let my dog out in the afternoon, I swear I felt time shift. As I watched him sniff in the direction of the middle school a block away from my house, I was instantly transported to the days of stuffing flare jeans into knockoff Ugg boots and sliding my LG Neon keyboard in and out to remind my classmates that I had an ultra-cool LG Neon.

I don’t think that version of me anticipated living in another city, surrounded by new people, feeling more secure and satisfied with myself than ever before.

It feels odd to have memories in completely separate places with different casts of characters,  almost like I’ve been living multiple interwoven lives this whole time. It’s like I have different versions of myself.

I find that all the changes for Christmas — like the replacement Jesus and his protective glass panel — remind me to take stock of who I feel like right now, to be thankful for my many departures from who I used to be and to look forward to all the reincarnations to come.

Most of my past winter breaks have been spent working to earn money for the upcoming semester. But this year I had the opportunity to travel as a last hurrah before I graduate this spring. My winter vacation spots ranged from way up north in snowy Quebec City, Canada, to down south in warm Huntsville, Alabama, and then back home to the smell of bluegrass and rain in Louisville, Kentucky.

I went from wearing a heavy winter coat and two layers of pants to a T-shirt and jeans to a cozy sweatshirt and pants, but I had a wonderful time spending my winter break with the people I love.

Out of everywhere that I visited, Canada was my favorite. I journeyed to Quebec City at the beginning of break with my boyfriend’s family. They graciously allowed me to accompany them to the winter wonderland for a long weekend. We traipsed through the snow-covered streets, looking in all of the quaint shops.

To visit the more historical parts of Old Quebec, we had to climb a steep, slippery hill or take the funicular, which is a cable car much like Pittsburgh’s two inclines. Some notable sights were the gates of the Citadelle, the Chateau Frontenac and a German Christmas market which were interesting because they displayed some of the history and culture of the city. The gates were imposing and the chateau loomed above us at all times.

My favorite activity was sledding down a man-made toboggan run built in 1884. There are three tracks and we could place up to four people on the toboggan. We piled into the toboggan, careful not to slip down the steep concrete hill. I rode with my boyfriend and two of his sisters. The youngest sat in front of me and the other two sat behind us on the wet toboggan. I held her tight with my legs and arms wrapped around her body. When the man pulled the lever and let the toboggans go, all of us yelled with excitement.

There’s nothing like hurtling down an ice-covered track at 70 km/hr on a toboggan carrying four people while the wind whips your cheeks and bits of ice fly into your eyes. When we reached the end of the track, all seven of our faces were pink and smiling.

After a week of all-nighters, my winter break began with another sleepless evening as I boarded my seven-hour red-eye to Paris.

Nonetheless, the jet lag did not phase me and my sister because we were returning to our second home. Since moving to the States, we rarely visited the country we grew up in, and even less often saw the close relatives who resided there. This made every moment we did spend in our family’s country even more sentimental.

When we arrived at Charles-de-Gaul Airport in the morning, our grandfather welcomed us with open arms and kisses on both cheeks. Despite having not seen him in two years, he hadn’t changed at all, with his brown leather beret marking his signature look. Our grandmother, six cousins and aunts and uncles greeted us shortly after.

One highlight of the trip included the Cathedral de Notre Dame. While we did not enter the cathedral itself, we walked the streets around it and explored the small shops and creperies in the area. The area is filled with a surplus of tourists, and an excess of cliches.

However, my favorite part of Paris remains L’avenue de Champs Elysees — and in the winter around the holidays, it is more exquisite than ever. The string lights that hang over street lamps shine brilliantly, and the window displays in the shops are embellished more glamorously every year. And of course there’s nothing more refreshing than an authentic shopping spree in the fashion center of the world.

Despite our everlasting jet-lag and another crammed seven-hour flight with double the amount of luggage we had when we left, my sister and I felt more rejuvenated than ever. Revisiting our family and place of origin was the best holiday gift we could ask for.

This break was my first time stepping foot in my parents’ house since the day I left for college. It had been roughly four months since I had last seen my chaotic suburban hometown, the type of place where you cannot step outside without seeing someone you know and where everyone knows everything about everybody.

I wasn’t sure how it would feel when I finally got back to Johns Creek, Georgia. I never thought much about it until the plane landed and I was suddenly greeted by the warm sun and an intense humidity that I had nearly forgotten.

Much to my dismay, being back home felt like I had just woken from a pleasant dream. My home life and college life are so separate from each other that sometimes college really feels like a fantasy world.

My friends rushed over to my house as soon as I was home and we all shared our experiences with one another, each one so different. Our college choices ranged from Atlanta to Virginia to Pittsburgh and so on. We all spent hours updating each other, talking about rush experiences and what new-found sorority life entails, roommate questionnaires and academics. It felt like the conversation could go on forever.

And even though we each live our new lives in such different places with very different people, we still sat on my bed in my house recounting our time apart and knowing in our hearts that we would always return to this place a little different than we left it. Yet no matter how different we each return, we will always share one thing in common — our home.