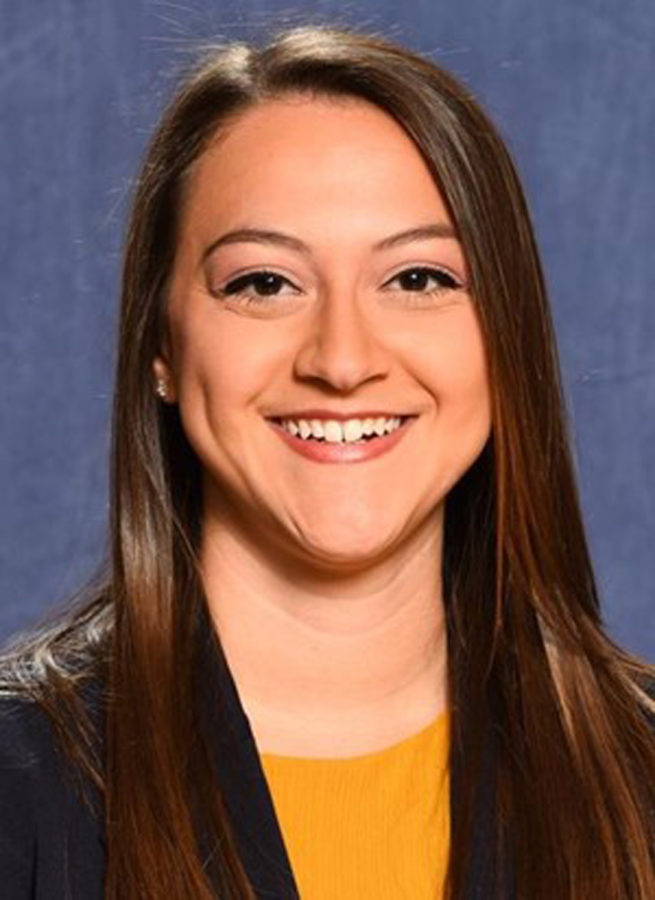 If you attended any Pitt sporting event this year, you likely saw plenty of people on their phones — but a few of those people have good reason to be distracted. The Pitt sports information directors and members of the marketing team are in charge of managing the athletic teams’ social media accounts, from live-tweeting events to highlighting individual athletes’ accomplishments. The social media accounts are one of the most important parts of the team.

Pitt Athletics has accumulated 210,000 followers across its main accounts on each of the three major platforms — Facebook, Twitter and Instagram. Among the individual team accounts, Pitt Football leads the way with 74,400 followers.

In control of these main accounts is Julie Jurich, director of social media and media relations for men’s soccer, wrestling and women’s tennis. Jurich joined the Pitt Athletic department in July 2015 and has cherished her time so far working with her department’s social media.

“What I enjoy most about social media is, for wrestling at least, is live-tweeting matches,” Jurich said. “I’ve had fans and family members of the team come up to me and say, ‘Hey, I really appreciate you giving all these updates when the guys are on the road, I follow them all the time,’ and that’s awesome.”

While she gets some good feedback, not everything Juric sees is positive. In the sports world, fans will often take to Twitter to express their displeasure with a team — sometimes politely, but more often with vulgarity. The Pitt Athletics Twitter account has 31,600 followers, but according to Jurich, the Pitt Athletics Facebook page, which has 164,000 followers, is where fans really get mad.

“I feel like a lot of [angry fans comments] is on Facebook, but it’s like that with any sport,” Jurich said. “Facebook is a place where people go to vent. We could be up at halftime for a football game and people will find things to complain about, a lot of the time it’s just trolls trying to be trolls, and you don’t feed the trolls.”

But Jurich tries to look at the bright side of having trolls. To her, it shows fans are trying to engage and are paying attention, which is always a positive — even if it is negative.

While she tries to ignore the negative comments, Jurich still looks at them to make sure she hasn’t missed any genuine questions from fans. She also tried to keep the pages kid-friendly by hiding any comments with a lot of swearing, though she says she doesn’t need to do that often.

While Jurich handles specific parts of the social media job, she doesn’t do it all alone. Most social media platforms consist mostly of personal accounts controlled by single individuals, but larger-scale accounts that are under the name of a company, a team or even a high-profile public figure, often utilize a team of people and a process behind the content that’s posted.

Some of those people include the SIDs and the marketing team. Every member of each team is assigned a sport, together they make sure everything is posted. Making sure everything is covered means the departments have to be in constant communication.

The marketing team helps post about promotions, while the SIDs do the press releases. During games, one person may do an Instagram story while someone else posts stats on different social media stories.

“Every sport is kind of different, as far as who’s doing what,” Jurich said. “But it’s always one of the SIDs and someone in marketing.”

To remain active and maintain fan engagement, the SIDs do their best to post highlight videos, award recognitions, alumni news and recruiting announcements. To do that, multiple different departments, including marketing, SID, video and graphic designers come together.

“Our video team does a really great job creating behind the scenes videos or video recaps and posting stuff from the TV show,” Jurich said. “We also have really good graphics designers who put out great stuff, too.”

With 14 teams, it may seem like a challenge to give equal representation to all sports. Jordan Fields, junior triple and long jumper, feels that, despite solid content, the Pitt Athletics account could do a better job spreading out the exposure.

“The content is pretty good, but I think the Pitt Athletics Instagram page could post more about the track team,” Fields said. “We’ve talked about it amongst ourselves and [the account] can be really football and basketball heavy even when the sports are out of season.”

While some athletes may not agree with all of the posts, the SIDs do their best to keep the athletes in touch with social media. While they don’t ask for their input too much, sometimes if the SIDs have a picture they would like to post, they will ask the athlete if they have any good caption ideas.

They also encourage the athletes to retweet or repost the posts.

“One thing we tell them is that the team pages are the space where we’re going to promote them and their games,” Jurich said. “And the best way they can try to get their fans at the game is by retweeting our tweets and that kind of stuff.”

For some social media accounts, the team behind the content will try to analyze the success of the post, often based around likes, reposts and comments/interactions. While Jurich notices when a post does well, she knows the number of likes is not the end all be all of a good post.

“We definitely look at [number of likes/interactions] but a final score graphic against a ranked team is obviously going to do better than a preview for an upcoming game,” Jurich said. “But that’s just stuff that we have to put out. We definitely look at that kind of thing to see if we should have posted at a different time of day, or maybe we should have switched up the caption, that kind of stuff, it’s all pretty basic.”