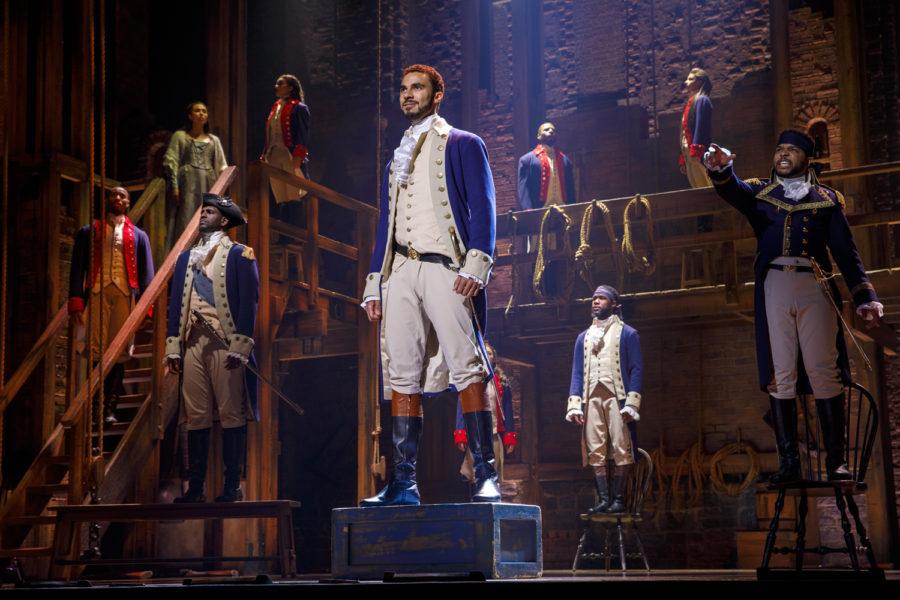 By Alex Dolinger, For The Pitt News

The pressure is on for the touring cast and crew of “Hamilton” as they bring one of the most coveted and original performances of all time to cities across America. As this production has become more accessible, fans may have questioned if the cast performing in Pittsburgh Jan. 1-27 would meet the towering expectations placed upon it, and my answer is an emphatic yes.

This popular show follows the life of Alexander Hamilton from when he was 19 years old. The audience watches him fight in the Revolutionary War alongside George Washington and navigate the political arena as the first secretary of the treasury. The story is narrated by Aaron Burr, the man who shot Hamilton in the duel that ended Hamilton’s life.

The brilliance of creator, composer and lyricist Lin-Manuel Miranda is evident in this adaptation of historical events that shaped the country we live in today. What makes “Hamilton” different than the average period piece is the modern touches of lively rap music and an ethnically diverse cast. In a theatrical world dominated by adaptations, “Hamilton” does it right by taking ownership of this story and telling it in a way it has never been told before.

Upon entry to the theater at the Benedum Center, guests were greeted by an intricate set of aged brick walls and wooden infrastructure. Set designer David Korins created a simple set that gives actors plenty of room to move at different levels. However, there was a pleasant surprise for the audience — there was a rotating panel built into the stage.

This rotating floor allowed for several well-executed moments where the actors were in tableau and the stage would rotate them so the image they created was seen from all angles. This aspect of the stage was also used as a treadmill of sorts, allowing actors to walk or dance while still facing the audience. This part of the set was used to its fullest capacity during the show, which was very exciting to see.

Those who are used to listening to the voices of the original Broadway cast will not be disappointed by the powerhouse vocalists of the tour. Miranda’s famous performance as the titular role is a lot to live up to, but Austin Scott brought his own perspective to the role and gave a spectacular performance. His portrayal of Hamilton is earnest and endearingly awkward at times, which had the audience cracking up during his comedic moments and holding their breath for his dramatic ones.

Another standout was Bryson Bruce, who played the roles of Marquis de Lafayette and Thomas Jefferson. He was incredibly funny and kept his energy up through the entire show, switching seamlessly between the two roles. He was complemented during both acts by Chaundre Hall-Bloomfield as Hercules Mulligan and James Madison. Hall-Bloomfield spent the first act as the hilarious hype-man who spied on the British, and then completely transformed into the sickly and reserved Madison, which requires a lot of range as an actor.

It was also interesting to see how the iconic Schuyler sisters were played by Isa Briones (Peggy), Hannah Cruz (Eliza) and Stephanie Umoh (Angelica). Cruz’s soulful voice is reminiscent of the role’s originator, Phillipa Soo, and she managed to portray the intense emotions this character goes through in a way that looked effortless. Umoh was consistent, giving emotional and intense performances during iconic numbers like “Satisfied” and “It’s Quiet Uptown.” And last but not least, Briones’ brief performance of a reluctant Peggy being dragged around the city by her older sisters was a memorable, though quick, piece of the show.

While they are sometimes forgotten about in the world of musical theater, the ensemble gave one of the greatest and most challenging performances I have ever seen. Not only are they singing Miranda’s complicated, layered harmonies with perfect pitch and tone, but they are doing so while dancing Andy Blankenbuehler’s famously difficult Tony-Award-winning choreography.

These dancers are the essential frame of every picture created by the main vocalists. The ensemble enhanced every number without distracting from the typical setup of an actor planted center stage. They navigated different platforms and often acted as a stage crew, bringing furniture on and off stage.

In addition to the set design, the lighting and costume design were incredibly well executed.  Paul Tazewell’s simple and effective design gave several characters their own color scheme. This was especially evident with Hamilton. Once he was able to stop wearing a soldier’s uniform, he continued wearing a green suit that changed slightly with time. His rival, Burr, was often wearing shades of red to contrast.

This costuming technique was utilized with several other characters, most impressively with the Schuyler sisters, who each have a single color they wear throughout the show. Angelica and Eliza both don several gowns throughout both acts, each more beautiful than the next.

The lighting design by Howell Binkley was gorgeous for every scene, utilizing various styles. For the songs “Helpless” and “Satisfied,” lanterns flew in from above the stage that were meant to simulate candlelight. Those very same lights would burn brighter during certain moments, which was not only beautiful, but showed how detail oriented the creators of the show are. Tazewell’s method of clothing each character in a single color helped create one of the strongest images in the show during the number “Non-Stop,” where Hamilton and Burr stood in their own soft green and red spotlights, respectively.

“Hamilton” at the Benedum was an unforgettable performance that was bursting at the seams with talent. When the show was over and the lights came up, several audience members wiped away tears as others immediately jumped to their feet, clapping and cheering. This beautiful story told by an exceptional group of people will stay in your mind and in your heart long after you hear and see it in person.

Editor’s Note: A previous version of this article incorrectly referred to Alexander Hamilton as a past secretary of state instead of a past secretary of the treasury. The story has since been updated with the correct information. The Pitt News regrets this error.