Heinz Chapel kicked off the spring semester with some help from three talented chamber musicians from the Pittsburgh Symphony Orchestra. 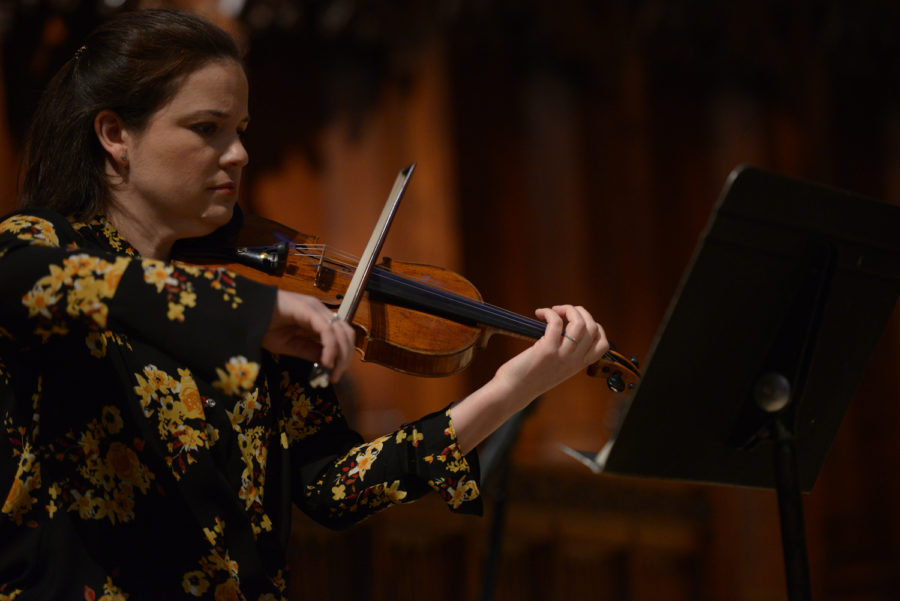 Lydia Miller plays the violin in Heinz Chapel as one-third of the Miller-Kufchak-DeBruyn Trio.

A viola, a violin and a cello had a very meaningful conversation at Heinz Chapel on Sunday afternoon — with the help of the Miller-Kufchak-DeBruyan trio.

The chamber trio, which features Pittsburgh Symphony Orchestra-trained musicians Lydia Miller on violin, Michael DeBruyan on cello and Meredith Kufchak on viola, played on Pitt’s campus the afternoon of Jan. 6. Their performance was intended to mimic a conversation between friends, but through the mode of chamber music.

The trio performed three different songs with multiple movements, beginning with one movement from Franz Schubert’s Trio No. 1 in B flat Major, a classical Austrian song. The piece featured a bright tone that highlighted violinist Lydia Miller, while the viola and cello added dimension and harmony to the melody Miller carried throughout the Schubert piece.

Miller admits, however, to the level of difficulty that the trio faced in performing such a detailed and lengthy piece.

After performing their Schubert classic, the trio transitioned to a much longer piece titled Serenade in C Major by Ernst von Dohnanyi, a Hungarian composer. The composition featured five movements beginning with a march, which featured heavy tones from both the viola and cello as to create the sound of a military parade.

As the Dohnanyi piece came to a close, the group once again transitioned to a new piece. But instead of continuing with the classics, the trio decided to integrate a more modern piece set in the Appalachian Mountains.

“When I decided to perform in Pittsburgh, I heard it was the ‘Paris of the Appalachians,’” Miller jokingly told the audience. “I knew I had to honor this area somehow, so we decided to perform this next song in order to highlight the beauty of these mountains.”

Wrong-Mountain Stomp, written by John Mackey, portrays the conversational side of chamber music. The piece tells the story of a young girl named Jenny who decides that the Appalachian mountains aren’t enough for her and she wishes to move to the Rocky Mountains instead.

“It’s such a departure from like everything else that we do and it gives us permission to be silly and creative in the way that Schubert doesn’t,” Miller said.

Told in three movements, the story opens with a fight between Jenny and her mother in a section titled “Mama, I’m Leavin.’” The violin and viola speak to each other in bright and strident tones that reflect a quarrel between mother and daughter.

The second movement, titled “Billy, I’m Leavin’,” tells the tale of a somber break up between Jenny and her longtime boyfriend. Billy, portrayed by the cello, wails as Jenny tells him she must go. The cello’s falsetto moans as Jenny, the violin, responds in mellow and smooth notes.

The final movement, “The Train’s Leavin,’” opens with a violin solo meant to replicate the sound of a train whistle. As the movement progresses, the violin is met by the sound of a cello creating the noise of train wheels chugging on a track. The trio combines into a constant rhythm, mimicking a ride across the country.

As the performance comes to a close, audience members bobbed along to the chugging of the train, laughing and smiling along with the performers. DeBruyan said “Wrong-Mountain Stomp” is by far the most fun and distinct song of the afternoon.

“We had a Schubert piece, we had the Dohnanyi piece, which are more traditional, like what you’d expect to hear in a chamber music concert,” DeBruyan said. “So the Mackey at the end is such a curveball and it’s a totally different style, and we had so much fun putting it together and messing around with the sounds.”

This showcase is one of many that Heinz Chapel features throughout the semester. Karen Sebolt, an event coordinator at Heinz Chapel, was excited to offer more performances as the spring semester continues.

“We really hope that students will take advantage of these shows,” Sebolt said. “We will be offering events ranging from string trios such as what you saw today to jazz groups, choral concerts and more throughout the spring.”