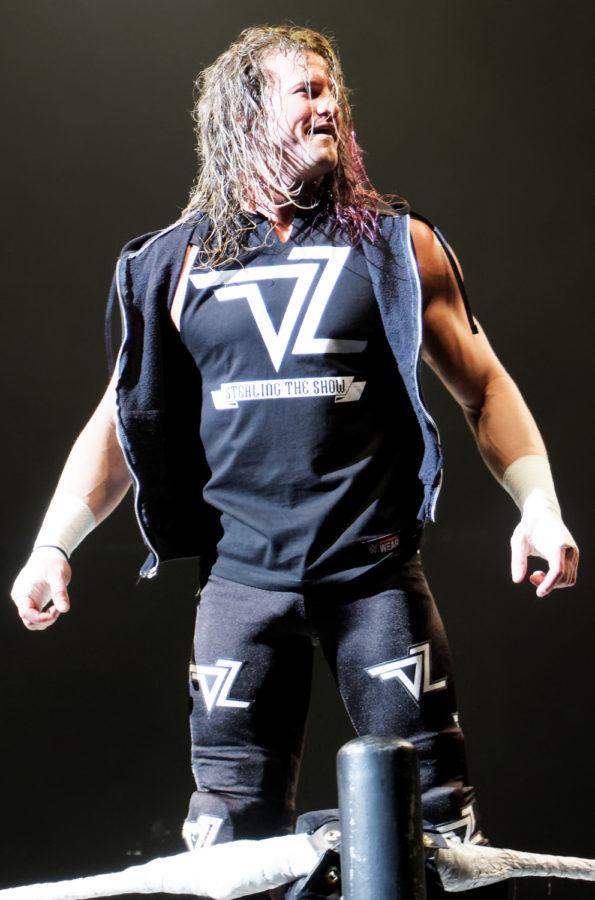 The other night, I had a dream that I got to meet WWE superstar Dolph Ziggler in a gas station. Even he mentioned that the feud between him, Drew McIntyre and Finn Balor was becoming drawn out and entirely boring.

WWE hosted “TLC: Tables, Ladders & Chairs” Dec. 16, 2018, from the SAP Center in San Jose, California. McIntyre and Balor were set to square off in a one-on-one match that fans already knew was going to have interference from Ziggler.

The tag-team-partners-turned-mortal-enemies bit is one that WWE has implemented countless times throughout history — the Hardy Boyz, The Rockers and #DIY, to name a few — and the point is usually to evoke a happy reaction from the good guy beating the bad guy.

While the occasional friends-to-enemies story can work in certain scenarios, like the Hardy Boyz breakup leading to Matt Hardy gaining WWE’s version of the Extreme Championship Wrestling title and a long-awaited WWE Championship reign for Jeff Hardy, it’s not as effective if the blow-off just leaves one superstar in the dust.

McIntyre was reintroduced to WWE’s main roster in April as a monster heel lackey to Ziggler. His previous run, which lasted from 2009 to 2014, left fans wanting way more from the dubbed “Chosen One.”

But he beefed up majorly, grew a beard and just overall became super hot, which skyrocketed his odds of success in the business already.

Going into December, McIntyre remained unpinned on WWE’s main roster. He brutalized all of his opponents in the ring and looked amazing doing it, and his promo game also stepped up considerably from his former Three Man Band days with Jinder Mahal and Heath Slater.

WWE CEO and creative control freak Vince McMahon is very high on McIntyre right now and wants him to be a star. He fits right into McMahon’s preferred archetype of professional wrestler: big sweaty men.

So the question remains — why is McIntyre stuck in a dead-end program like this?

Ziggler has been a reliable upper-middle-card guy for WWE since his debut. His long blond hair and cocky persona craft a guy that you just love to hate. He normally comes out looking pretty good whether he wins or loses a feud, since his mic skills make up for his lack of star power. He really isn’t the issue in this boring saga.

Within a few weeks, McIntyre has now suffered two pinfall losses, one from Ziggler on Monday Night RAW and the loss to Balor at “TLC.” While McIntyre was — and still is — hyped up to be a dominating force, his credibility got destroyed almost instantly.

And sadly, he’s the one who comes out looking stupid in all of this.

The real problem is putting a huge guy like McIntyre — who is 6-foot-5 and 265 pounds — into a bout with Balor while still trying to maintain him as a credible future opponent for WWE Universal Champion Brock Lesnar. Balor is a wonderful technical and athletic performer, and he needs to use those abilities, not outside distractions, to win matches.

Taking that into consideration, it’s strange that this three-way feud ever happened to begin with and even stranger that it’s still happening. Balor had no business being involved in this program, and should still be working his way back up to competing for the Universal title, which he only lost due to a shoulder injury.

Of course, he’s only not in that title picture because beating Lesnar would seem super unrealistic — given how, in kayfabe, Lesnar should be able to break Balor over his knee.

With no offense or complaint to him personally, Roman Reigns’ new bout of leukemia could not have come at a more inopportune time for WWE. He finally won RAW’s biggest title after a long and painful quest for it, and then almost immediately had to drop it again to fight off cancer. In a business where the physical health and safety of the performers is of the utmost importance, sometimes planning for a better future demands sacrificing product quality in the short-term.

Championship programs with Reigns would be fresh and exciting, considering he’d been stuck trying to conquer the Beast for what felt like his entire solo career. And while I’m not the biggest fan of Reigns’ on-camera persona, having him as a fighting champion would be a treat compared to dry-as-a-sponge Lesnar.

Surely, Reigns’ diagnosis threw off the “TLC” plans, and it proved to be a pretty sucky show overall. Of course, the highlight was the headliner: the triple-threat SmackDown Women’s Championship match between Charlotte Flair, Becky Lynch and Asuka, who came out victorious.

But reporting on perfection isn’t very interesting, and I’ve been praising the SmackDown ladies a whole lot lately, so I wanted to go for a more skeptical take this time.

Hopefully, Balor, Ziggler and McIntyre can redeem themselves leading up to and during WWE’s next pay-per-view. Royal Rumble is at Chase Field in Phoenix on Jan. 27 at 7 p.m., live on the WWE Network.