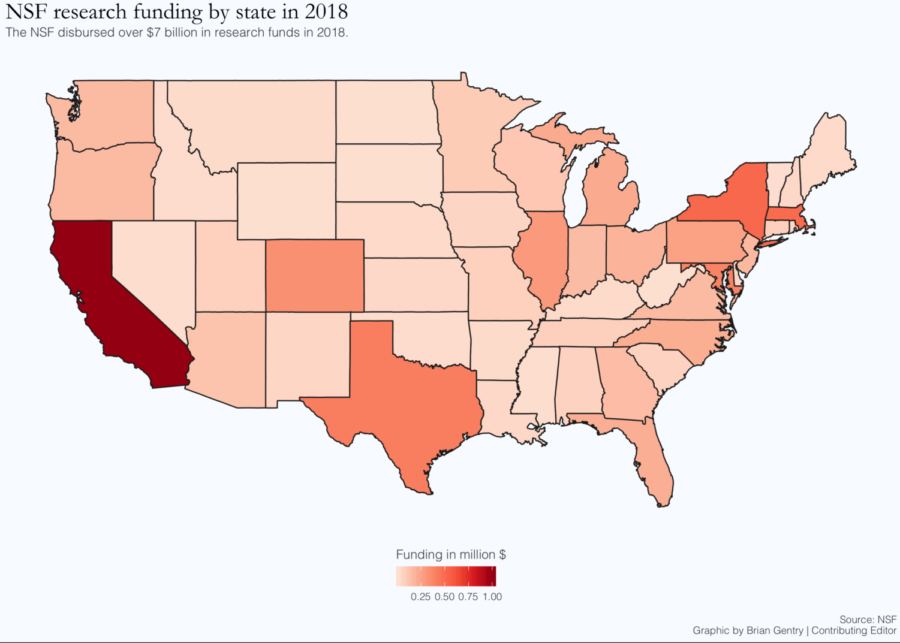 The U.S. government shut down on Dec. 22, and research production at Pitt and other universities may slow down because of it.

Some projects funded by certain federal research departments — including the National Science Foundation, NASA, the EPA and the FDA — are at risk, as these organizations are dealing with rapidly shrinking budgets that can’t be refilled until the shutdown ends.

The U.S. is 18 days into the current shutdown, nearing the record 21-day shutdown during Bill Clinton’s presidency in the mid-’90s. The current shutdown is happening because of President Donald Trump’s refusal to sign off on any budget that does not include $5 billion in funding for a border wall, money that House Democrats refuse to provide. Recently, Trump said the shutdown could last “months or even years” if his requested funds are not included in the budget.

The shutdown could spell trouble for future research projects. Pitt received more than $16 million in research grants for 82 projects from the National Science Foundation in 2018. There are projects in STEM departments funded by NASA. Without many federal departments properly funded, new projects may be put on the back burner for a while.

But University officials are not concerned about any possible lack of funding. In an email statement, Rob Rutenbar, the senior vice chancellor for research at Pitt, said that most research is unaffected by the shutdown.

“The National Institutes of Health, the University’s largest source of federal dollars, remains funded, so we are not seeing an impact on that end,” Rutenbar said.

Although the NSF is closed, the shutdown has predominantly occurred during winter break, when faculty are taking more time off, he said, mitigating the impact.

“The shutdown started around the time the University was on winter break,” Rutenbar said. “So as we are now gearing up in the new semester, we’ll continue [to] monitor and evaluate any additional and future impacts of the shutdown.”

According to the NSF, current research is minimally affected by the government shutdown. As long as funds have already been awarded, the research projects can continue. Researchers can still submit annual and final reports — they just won’t be reviewed until the government reopens.

But there are consequences for researchers applying for new grants. While researchers can still submit applications online, they won’t be processed until the government reopens, and no new funding opportunities will be posted on the website. Panels to review new applications will be cancelled and rescheduled to a future time.

This is something Jason Shoemaker, a professor of chemical engineering in the Swanson School of Engineering, encountered. He was scheduled to be on a review panel for an NSF grant application, but it was cancelled due to the shutdown.

“Given the suddenness of the shutdown, NSF is in a ‘wait and see’ period,” Shoemaker said in an email. “With the close still ongoing, we are unsure as to when the review will occur.”

Though this has had little impact on Shoemaker, he said it could have detrimental effects on the lab applying for the grant.

“This is far more important to the individuals who applied to the program,” he said. “Any major delay, say months as [has] been threatened, would prevent funding of labs that are providing critical knowledge infrastructure to the U.S.”

This may happen to Mike MacFerrin, a postdoctoral researcher in glaciology at the University of Colorado at Boulder. He applied for NSF funding last summer for a project investigating the hydrology of high-elevation regions of Greenland, requiring fieldwork in Greenland.

He said that he’s expecting to hear back about funding this month, but that a prolonged government shutdown could completely prevent him from completing his work.

“It’s a pretty tight turnaround as it is, finding out [about] funding in January to go up to the ice sheet in April,” he said. “If we wait another month and then find out in late February that the funding is coming through, we may not have time then to get things ready in time for a field campaign in the spring.”

Not only does the government shutdown impact his work, he said, but it also affects his personal life.

“My position is what they call ‘soft money.’ I’m only funded for work,” MacFerrin said. “Part of my salary later this year would come from that project. Part of it’s my own anxiety, wanting to know if I’m going to be paid by this project or not.”

MacFerrin said he has cause for concern, as there’s precedent for government shutdowns affecting scientific research.

“In 2013, the shutdown happened around October,” he said. “That was right around the time a number of field campaigns were heading down to Antarctica, and it was really throwing a lot of wrenches in that work.”

The 2013 shutdown ended 16 days after it started and soon funded the departments that grant research money to universities. While researchers are hopeful that the current one will end soon, many remain frustrated with the situation.