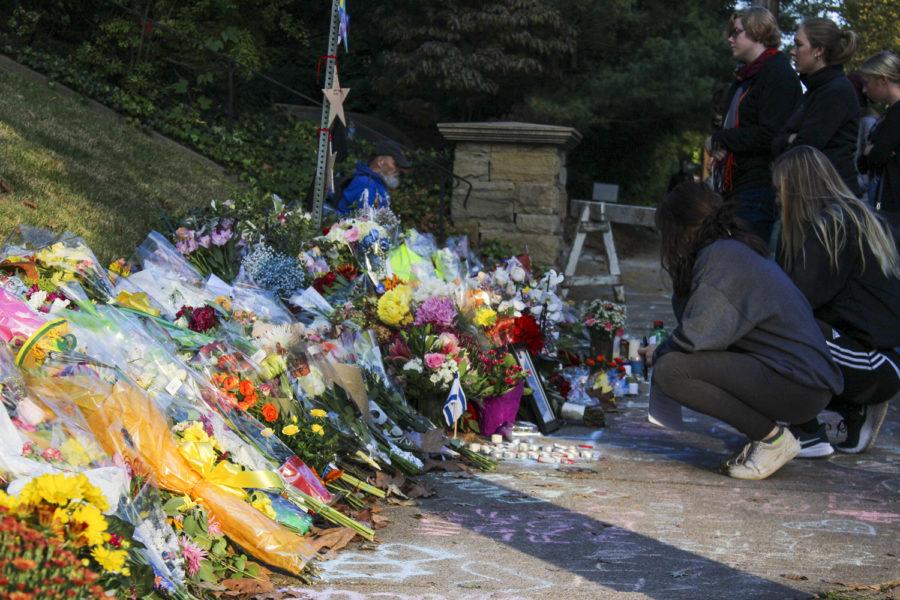 Mourners gather at a small memorial behind police lines near the Tree of Life Synagogue Oct. 30, 2018. On the other side of the barricades, President Donald Trump addressed the nation three days after the deadly Tree of Life shooting.

Just shy of two weeks after the deaths of 11 congregants at the Tree of Life Synagogue in Squirrel Hill, a crowd of nearly 60 people gathered in Posvar Hall for Pitt’s annual commemoration of Kristallnacht on Nov. 9, 2018. Kristallnacht, also known as “Night of the Broken Glass,” occured in Nazi Germany on the night of Nov. 9-10, 1938. About 100 Jewish people were killed, their homes and buildings vandalized and synagogues lit ablaze.

This larger-than-average attendance was one of the reasons why a group of Pitt professors decided to get together to create the one-credit pop-up lecture series “Anti-Semitism Then and Now: Perspectives after Tree of Life.” The lecture series is hosted this semester by the Jewish studies department, in cooperation with the history department, religious studies department and the European Studies Center. The class, which runs from Jan. 23 to April 24, meets Wednesdays at noon for 50 minutes.

One of the class’ featured lecturers is Rachel Kranson, an associate professor and head of undergraduate studies in the religious studies department. Kranson said education on anti-Semitism is important because people can learn to recognize anti-Semitic ideology and prevent the further dissemination of such ideas.

“After the Tree of Life shooting, there were many people, in the University of Pittsburgh community and beyond, who struggled to understand how and why something so horrible could have happened. Nothing can fully answer this question,” Kranson said in an email. “However, learning about anti-Semitic ideologies and myths, and the destructive impact of these ideas both today and in the past, can offer some critical perspective.”

Adam Shear, department chair of the religious studies department and another of the class’ lecturers, said the faculty decided on a one-credit lecture series after it went through several other ideas, such as a one-day teach-in or revitalizing a past course on anti-Semitism.

“We wanted something that students could have access to and get credit for if they were attending regularly,” Shear said. “The main thing was thinking about bringing all the expertise at Pitt in a way that would be helpful.”

Shear said instances of mass gun violence in American society tend to get lumped together, regardless of the motive behind them. In presenting a course about anti-Semitism, professors could make sure to distinguish the context of the Tree of Life shooting as an act of anti-Semitism.

“There are other experts on gun violence in America who can put [Tree of Life] into the history of gun violence in our society. There are other psychologists who deal with the mentality of somebody who would break down the bounds of what’s normal and commit violent acts,” Shear said. “But since we have the expertise on anti-Semitism, we wanted to give students that opportunity, and it’s something they’re not necessarily going to get in other discourses, either.”

“Sometimes Jews have been targeted because of their religious beliefs, sometimes they have been attacked for their perceived racial, economic, gender or political differences,” Kranson said. “This course will … explain the social, political and economic dynamics that bred various forms of anti-Jewish animus.”

Irina Livezeanu, Jewish studies director and associate professor in the history department, said each lecture would last approximately 30 minutes, and the next 20 minutes would be devoted to a discussion about the lecture topics. In order to receive credit, registered students must attend at least 10 out of the 12 lectures. As coursework, each student is expected to write posts for a blog about the course.

In addition to eight Pitt faculty members, two lecturers will come from outside Pitt — Michal Friedman, a visiting professor in the history department at CMU, and Lauren Bairnsfather, the director of the Holocaust Center of Pittsburgh.

“Some of [Friedman’s] students will come for extra credit to these lectures, some CMU students who aren’t taking her course maybe will come,” Shear said. “Lauren Bairnsfather is just a real expert on the Holocaust, so we wanted to invite her in to be a part of this, also. She’s a part of the Pittsburgh Jewish community so we thought that was a good idea.”

Funding for a teaching assistant for the course was secured through the European Studies Center. It is one of few European Union Centers of Excellence in the United States, which provides generous funding for programming about Europe and its place in the world.

“Since people are concerned, we should use it as a teaching moment and talk with people from an interdisciplinary point of view about what anti-Semitism is, what scholars have done in their work to try and explain its occurrence over hundreds of years of history and different disciplinary perspectives,” Livezeanu said.